Ivan Ives's Newspeak, plus Blues Traveler and Cheb i Sabbah 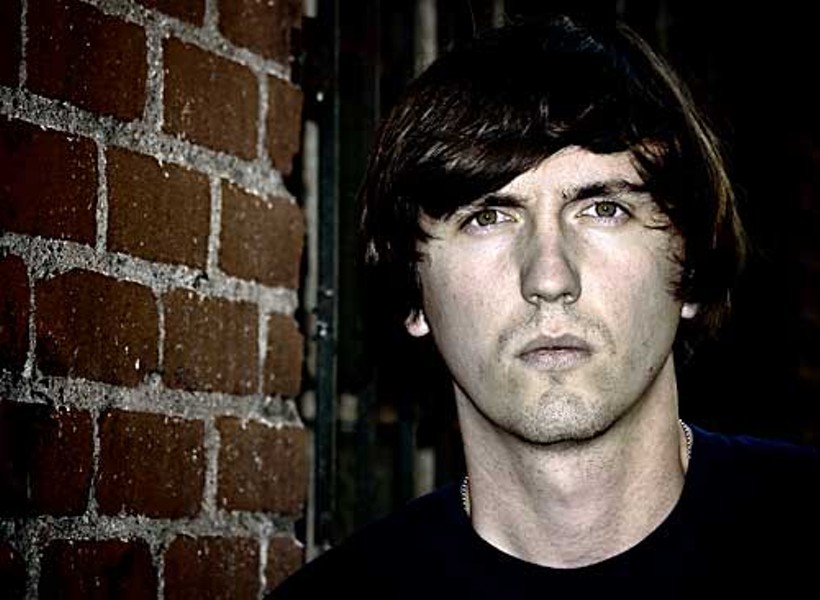 He calls his new album Newspeak, a reference to George Orwell's 1984 that's far from accidental. Ivan Ives was born in Russia, son of a dissident artist. "My dad's still not welcome there," he told me, calling from L.A. "Even though it's kind of a democracy now, there's still a lot of KGB around and they remember him. He's a painter and was very anti-Communist, anti-what-was-going-on, and was very vocal. He was persecuted in many ways: He was wiretapped. People hid in his walls. He was imprisoned and was going to serve for a long time, but managed to get out and get to Brooklyn."

That was where Ivan spent his early years, in the hotbed of hip hop, but his music career began in Los Angeles, where his family relocated. "I grew up listening to hip hop and liked rap the best, but went through this phase where I wanted to be in a band, blah, blah, blah. I did the whole rock-band-in-high-school thing until I realized I can't sing for shit really -- that wasn't my path. From that I transitioned into making hip hop, not just listening."

Now 25, Ivan is not exactly a dissident, but you can tell from the articulate raps he crafts that he's influenced by his father and is firmly anti-what's-going-on. He's well aware of Orwellian thoughtcrimes and, in his own way, uses newspeak to address them. "I'm trying to touch on things like that, but indirectly," he said. "Honestly, I've heard a lot of tracks about George Bush this, George Bush that. It's kind of boring to me. I don't see any point in going over it again and again. I'm starting to delve slightly into politics with this album, but in kind of an abstract way. Because of what [my dad] went through, fighting the government, he's always told me to ignore the government and ignore politics because it's all bullshit anyway."

Is your interest piqued? You can hear more of what Ivan has to say (much more) when he lays down his raps at the Red Fox Friday night alongside Scarub (of Living Legends) and The Afro Classics.

It started with The Establishment, a blues-rock garage band with harp player/vocalist John Popper, guitarist Chan Kinchla and drummer Brendan Hill that came together in Princeton, N.J. 20-some-odd years ago. Before long they changed the name to the generic Blues Band, then to the slightly more distinctive Blues Traveler. With help from allies like Bill Graham and David Letterman, the band eventually achieved big time fame, recorded a fair number of albums (including the recent North Hollywood Shootout), showed up on movie soundtracks and TV and played a helluva lot of live shows. By the early ?90s, the band had mastered the art of Dead-esque song transition and managed to tap into the then-nascent jamband circuit. They founded the H.O.R.D.E. tour, an anti-Lollapalooza jamfest that included bands like Phish.

Though it all, the live show was the thing. Fans have been trading recordings for ages -- the band includes streams of over 600 shows on their website (bluestraveler.net). On that front, B.T. has it down -- as noted by Wikipedia, "On their current tour, Blues Traveler sells recordings of that very night's performance. Fans can pre-purchase a copy of the show until 30 minutes into the performance and then pick up the CD after the show." That apparently includes the show this Thursday, May 28, at the Arkley Center. As we go to press, tickets are still available.

I picked up the CD at a yard sale some time ago; it had no case and no name on the label, but the Arabic-tribal art work showed promise, and it was on Six Degrees, a cool world music purveyor, so I took a chance. When I stuck it in my computer, iTunes told me it was by Cheb i Sabbah, a Berber club DJ originally from Algeria, who pioneered the use of Arabic, African and Asian beats and post-tribal music in his own dancefloor mixes, then found his music remixed by DJs like Loop Guru, Bassnectar and the Transglobal Underground crew. I got to hear him live a while back at an HSU music festival, but the setting was wrong -- his music wasn't right for daytime on the HSU Quad. It's better suited to a dark club like Nocturnum, which is where he'll be playing for dancers Saturday night with special guest DJ Chlorofill.

Same night in Arcata, KJ Sawka lays down live drum-n-bass and jungle beats and what's described as "other types of alien-sci-fi electronic music." This is a guy who creates sample banks for other producers. How that translates into a live show, I'm not sure, but he's on tour with Halo Refuser, a Portland-based producer/keyboardist who plays with the all-star jamband The Everyone Orchestra and the electro-beat band Surrounded By Ninjas.

Elsewhere in Arcata Saturday night, Seattle garage punk vet Brother James Burdyshaw runs his soulful band The Bug Nasties through its paces with the magnificence of Magnum drawing in the adoring hometown crowd.

Put on yer boots and grab yer hat, The Roadmasters are coming to the Arcata Theatre Lounge Friday night bringing straight-ahead country music to downtown Arcata. Of course the venerable band (started in 1976) doesn't just play cowboy music. As they note on their website, "We are known best for country rock, but perform a large variety of different sounds, getting our inspiration from Kiss to Garth Brooks, and everything in between."

Speaking of country, The Michael Paul Band, a big hat band from Oakley (east Contra Costa County), is in town to work the local casino circuit. Friday they're at the Wave; Saturday they hit Bear River Casino.

Rooster McClintock is another local band that's a bit country, but not exactly straight-ahead -- more crooked and honky tonkish. They play Wednesday at Humboldt Brews opening for Austin's self-proclaimed "Dirty Old One-Man Band" Scott H. Biram, who's touring behind a new Bloodshot disc, Something's Wrong/Lost Forever. If you've seen Scott wailing twisted country blues on his rack-held harmonica, then switching to demented, distorted vocals, all while banging out notes on his hollow body Gibson and stomping out the beat on a homemade amplified stomp board, you know what you're in for. He's get a hellhound on his tail, the Devil's not far behind and he'll be happy to introduce you.

The note from Joe, of G.R.A.S.S., was mainly to let me know that the band is playing at Curley's Monday, June, 1, with the first set broadcast live for KHUM's Backporch. But he also included an apt description of how a band comes to be: "We were just friends who liked to jam. Anthony and Dan asked Mark to come and jam, and the seeds were sown, that was, what, 2002? Around 2003, Harmonica Joe came on the scene, new to town. Mark told the boys, 'Share.'"

And so it goes. That's what it's all about: sharing music you like, with your friends, and sometimes with people like you -- listeners.