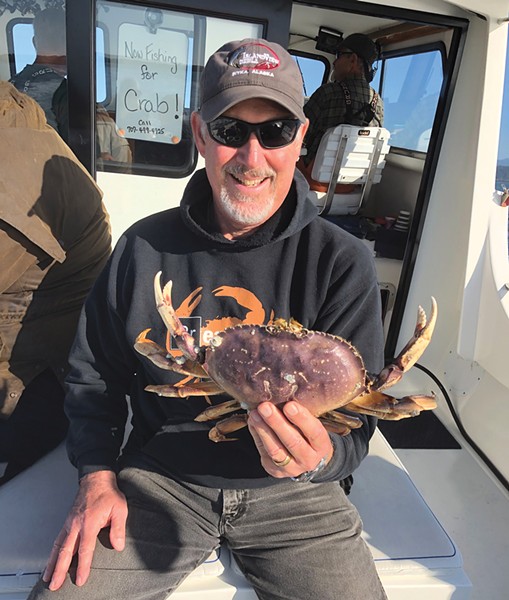 Photo courtesy of MackGraphics Humboldt Randy Barthman of Westhaven holds up a Dungeness crab from a few seasons back while crabbing aboard the Reel Steel out of Eureka. The 2022 sport Dungeness crab opener is slated to open Saturday, Nov. 5.

Back in April, the California Department of Fish and Wildlife (CDFW) issued a press release restricting the use of crab traps to help minimize risk of entanglement as humpback whales forage in California waters during the spring and summer months. However, the recreational take of Dungeness crab by other methods, including hoop nets and crab snares, was not affected by the trap restriction. Turns out the hoop nets became extremely popular and CDFW saw a dramatic increase in hoop net fishing effort for Dungeness crab. And, unfortunately, the increased effort occurred during times of elevated marine life entanglement risk. On top of that, the hoop net manufacturers got really creative at developing hoop nets that function like traps while still meeting the specifications in the current regulations.

To get a handle on the situation, the California Fish and Game Commission (CDFGC) decided urgent action was needed to protect against whale entanglements. CDFW proposed the following emergency rulemaking that will amend and clarify hoop net regulations to minimize the risk of entanglements.

• Ensure that hoop nets are regularly serviced every two hours;

• Modify design specifications to prevent the device from functioning as a crab trap that could incentivize longer soak periods;

• Reduce the weight of the hoop net, thereby posing less harm to an entangled whale or sea turtle should that occur; and

At the urging of the CDFW, these emergency regulations were adopted by CDFGC at their October meeting and will become effective prior to the Nov. 5 opening of the Dungeness crab season. For more information, visit nrm.dfg.ca.gov/FileHandler.ashx?DocumentID=204688&inline

Domoic acid testing in Dungeness crabs is roughly halfway complete on the California coast. To date, samples from Bodega Bay, Trinidad, Half Moon Bay/San Francisco and Monterey have all been tested at least once. None of the tested ports had crabs that exceed the action level of 30 parts per million. For more information, visit www.cdph.ca.gov/Programs/CEH/DFDCS/Pages/FDBPrograms/FoodSafetyProgram/DomoicAcid.aspx

According to Tim Klassen of Reel Steel Sport Fishing, the rockfish bite at Cape Mendocino remains excellent. "We were down there Monday with a few other boats and the fish were really on the bite," said Klassen. "We're still catching a very wide variety and the lingcod bite is good as well. The rockfish season will go through December and starting Nov. 1 there will be no depth restrictions."

The big news coming from the Cove this week is Bluefin tuna. According to Jake Mitchell of Sea Hawk Sport Fishing, there's been a school of them offshore for a few weeks. "I've targeted them a few times, but without much success," said Mitchell. "They are really hard to get to bite, I've hooked two previously and lost them both" Things changed for Mitchell on Monday when his crew brought aboard a 195-pounder. Aside from the tuna, the rockfish bite has been great according to Mitchell. "The lingcod bite seems to be improving as well. We made the trek to Rogers Break a couple times this week and did really well with some lings up to 25 pounds."

With the tuna season likely over for the season, boats are focusing on rockfish. Limits continue to come over the rails easily, including some nice lingcod. The north and south reefs along with the Sisters are producing some of the best fishing.

Halibut season remains open through Oct. 31 out of Brookings, reports Andy Martin of Brookings Fishing Charters. "Fish to 50 pounds are being caught on calm weather days in 200 feet of water. Lingcod fishing has improved, and females move into shallow water to prepare to spawn. Sport crabbing is now closed outside of estuaries and bays."

Currently, all North Coast rivers subjected to low flow fishing closures, including the Eel, Mad, Redwood Creek, Smith and Van Duzen are closed. Sections of rivers that are open include the main stem Smith River from its mouth to the mouth of Rowdy Creek. New in 2022, a low-flow angling restriction was added to the section of the Eel River from the mouth to Fulmor Road at its paved junction with the south bank of the Eel River, Sept. 1 through April 30.

The Mad River from the mouth to 200 yards upstream is closed until Jan. 1 2023. The Department of Fish and Game will make the information available to the public no later than 1 p.m. each Monday, Wednesday and Friday as to whether any river will be closed to fishing. The rivers can be opened up at any time. The low flow closure hotline for North Coast rivers is (707) 822-3164.

The salmon action has slowed on the lower Klamath, but there are still some bright fish around. The few boats still fishing are finding most of their success above Blue Creek. There isn't much pressure this time of the year, but the fishing can be good as some of the late-run kings start to stage in front of the bigger creeks. The daily bag limit is two jack Chinook 23-inches or less and two hatchery steelhead.

A handful of adult kings are being caught daily in the Chetco estuary, according to Martin. "Upriver, large schools of salmon are staging in the tidewater, awaiting rain," said Martin. "Flows are expected to jump the middle of next week. Gear restrictions are in effect above river mile 2.2, the power lines above the Highway 101 bridge, through Nov. 4. Bobbers must be used above the power lines. Sand shrimp and roe combinations are tricking salmon at Tide Rock, Social Security Bar and the mouth of the North Fork."