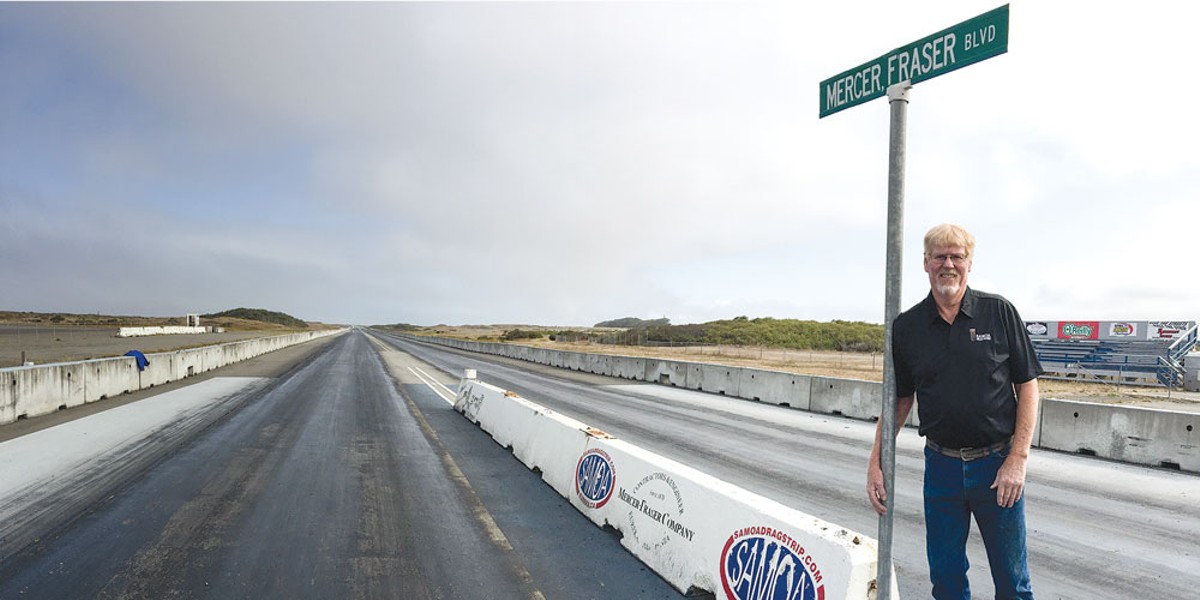 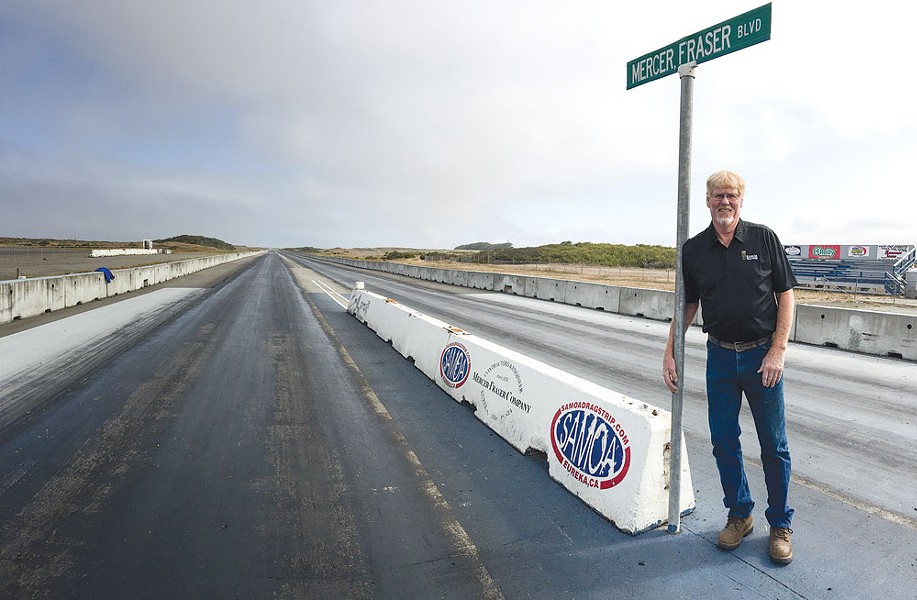 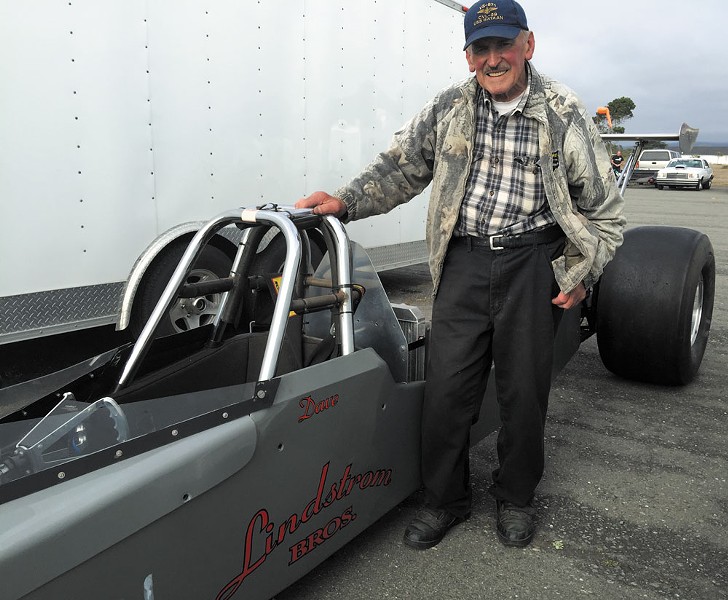 Photo by Michael Joyce Dave Lindstrom, an 84-year-old local legend, with his dragster in the Samoa Dragstrip pits. 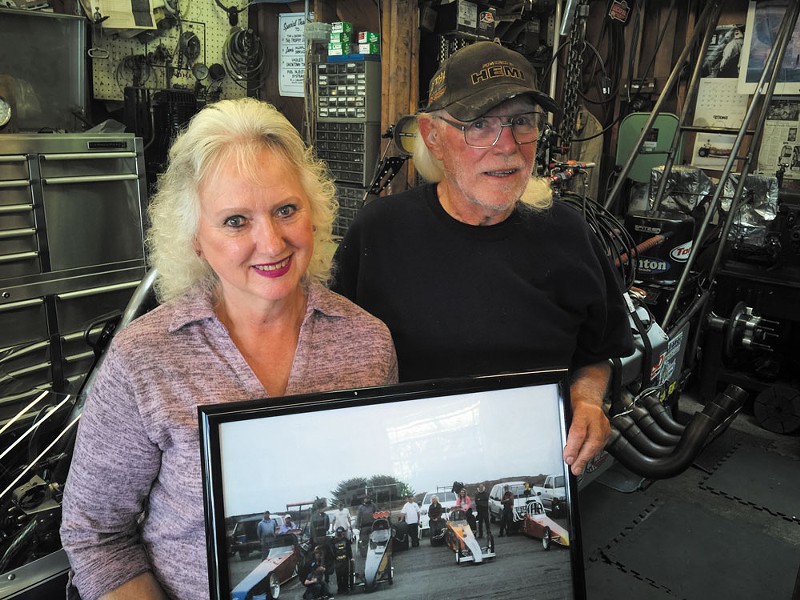 Photo by Michael Joyce Jerry and Betty Brazil in front of their dragster and holding a photo of three generations of Brazil racers. 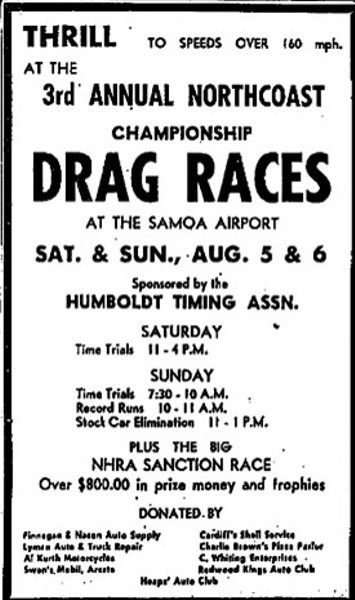 An advertisement for the Samoa races from 1961.

My hands squeeze tight on the wheel. Other parts of my anatomy are following suit. Tunnel vision has limited my focus to a half-mile strip of blackened concrete running north into the Samoa dunes. The smell is a funky mix of sea air and car exhaust. My race face is a quivering attempt at motorized manliness, fueled by tepid testosterone and near-toxic levels of adrenaline.

The guy I plan to race has informed me that his car is a '94 Mustang with a 5.0 V-8. When asked about mine, I find myself looking for the owner's manual and remembering I've been asked to move all the crap out of my car so nothing can "become a projectile." Life without a pine tree freshener and St. Christopher is lonely and I find myself jonesing for a George Plimpton bobble head.

I had wanted to race against Dale Lindstrom, de facto patriarch of the Samoa Dragstrip, but sciatica has him in the pits nursing his back and a 1929 Ford Roadster. Dave can tell you about growing up in the '30s just a half mile up the road, "shooting rabbits just over there," and delivering the Times-Standard to Navy seamen when this was a World War II blimp base. (The Japanese had attacked a tanker off Cape Mendocino just two weeks after Pearl Harbor, so blimps started patrolling the North Coast.)

The blimp base closed in 1945 and by 1952 local car clubs (most notably The Blockbusters) began racing on the airstrip. The car clubs merged to form the Humboldt Timing Association, holding organized races from spring to fall. It held its first National Hot Rod Association (NHRA) sanctioned race on Nov. 21, 1954. Eventually drivers grew tired of interrupting their races so planes could land so, in 1960, with the help of Eureka-based Mercer-Fraser Company, the group built the current strip about 100 yards away. The Samoa Dragstrip (400 New Navy Base Road) — along with the Redding Dragstrip — is among the oldest, continuously running drag strips in the country.

"The air here is perfect for racing," says Jerry Brazil, who first raced out at Samoa in 1955 with a modified Ford Model A. "When you factor the altitude, temperature and humidity out here, you can get a corrected altitude below sea level. So the air is denser. The denser the air, the more that goes through the motor, and the faster you go!" Brazil would know. He's built nearly all the cars he's raced. His personal best over a quarter-mile (the standard drag racing distance) is 5.42 seconds and 264 miles per hour at Sears Point.

"People wonder why we would only want to drive for a few seconds," says Danny Wright, president of the Samoa Dragstrip for the past 13 years (and who admits a fetish for '57 Chevys). "It's about the cars, the adrenaline, and the competition."

And it's that competitive spirit that has gotten the Eureka Police Department (EPD) involved with the racers twice in the drag strip's 64-year history. First, in the 1950s, when street racing first came into fashion. Back then Elk River Road was a popular spot and there were some deaths. The EPD encouraged the speedsters to move their races out to the Samoa track and, for the most part, they did. The second time was the early 2000s when the Fast and the Furious movies sparked a national street racing renaissance, often with deadly results, and police departments across the country again turned to drag strips. The EPD would even show up with patrol cars and motorcycles to challenge the street racers.

While it may be true that most drag racers can build an engine, are men (though women like NHRA Top Fuel racer Hillary Will, of Fortuna, are gaining ground) and have speed on their minds and grease under their nails, there is another commonality they are quite proud of: family.

"Racing is addictive and family-oriented," says Brazil, whose wife of 55 years, Betty, has helped him build most of his engines. "I raced my first car with Betty's brother and now my granddaughter (Kaycee Mela) is doing 172 miles per hour."

"I'm a car guy but I like watching my family race even more," says Wright, who helped start the Junior Dragster program for 8 to 17-year-olds in 1996. "My son is still racing at age 30 and was the very first junior dragster to go down this track when he was 8 years old. To watch him brought me more joy than when I used to race. I couldn't break the 13-second barrier but together we built him a 10-second car."

As for me, I didn't even come close to breaking 18 seconds in my quarter mile during the "everyone welcome" Street Legal Race. (You can do it, too, if you're a registered driver with a safe car and working brakes.) My family sedan — which I'm informed has a "2-liter, inline 4-cylinder engine with 155 horses under the hood" — made its way down the track at a speed that probably would have only alarmed my grandmother or the Eureka Police Department. Both St. Christopher and George Plimpton can breathe a sigh of relief.

The final races of the 2016 Samoa Dragstrip season will be Sept. 10 and 11. Saturday, Sept. 10 will be diesel races and on Sunday the track will be hosting the NHRA California State Championships for the first time in its history.