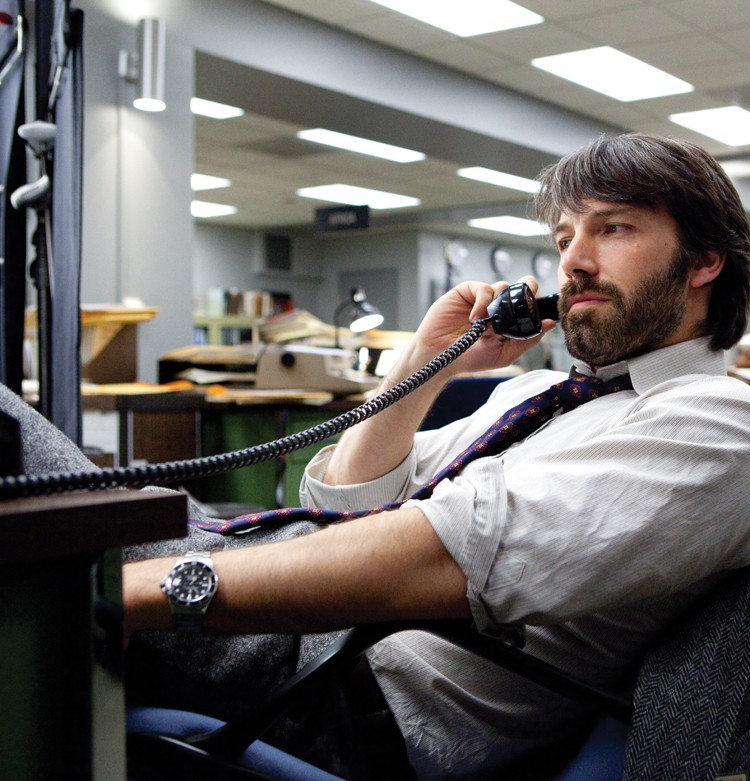 ARGO. Ben Affleck spent most of his thirties getting kicked around by trolls and bottom-feeders who dragged his personal life and professional accomplishments through the mud. I've never understood why so many people saw fit to pile on the guy; he's always seemed likeable enough to me. So it's been satisfying to watch him become an accomplished filmmaker and push his middle fingers up at his detractors.

Affleck demonstrated extraordinary poise and restraint behind the camera with his first two features -- Gone Baby Gone (2007) and The Town (2010). The former, a grim kidnap drama, and the latter, a taut bank robbery romance, both showcase insightful performances, restrained pacing and honest, emotional storytelling. In hindsight they seem like practice runs for his most masterful effort yet. With Argo, all of the attributes that make Affleck a noteworthy filmmaker come together in one of the most satisfying and expertly made movies of the year.

It's set during the Iran hostage crisis of 1979-80. After the American-installed Shah of Iran falls ill and seeks treatment/asylum in the U.S., revolutionaries take to the streets of Tehran. Protesting the Shah's westernizing influence and rule-by-torture, they eventually overrun and occupy the American embassy. All but six of the embassy staff are captured and held captive. Those six diplomats, sheltered by the Canadian ambassador, become the object of a contentious, secret rescue operation. It falls to C.I.A exfiltration expert Tony Mendez (Affleck) to construct airtight false identities for them and smuggle them out of the country. With some Hollywood help, he devises a plan: He and the diplomats will pose as a Canadian science-fiction film crew scouting locations in Iran. Seems implausible, right? Kind of harebrained and ludicrous? You're not wrong, and yet it really happened.

Argo opens with the overthrow of the embassy and then takes us methodically through the planning and execution of the rescue operation: from the smoky backrooms of Langley, where spooks argue over the efficacy of even less practical plans, to the B-list Hollywood studios where the fake movie has its real offices, and eventually to Tehran for a breathlessly tense climax.

As a director, Affleck goes admirably old-school. He knows how to frame a shot and move the camera, but he's not out to dazzle us with style. When appropriate, as in the frenzied scenes that open the movie, he goes gritty and handheld, using quick cuts to reinforce the unrest. But when the action pulls back and calms down, so does the camera. For most of the movie, it moves slowly and judiciously, giving us an opportunity to take in the exquisitely detailed sets and costumes. And as the story builds, the camera's presence becomes less and less discernible.

This efficient camerawork is an impressive sign of self-confidence. Affleck believes in his script, his actors and his own grasp of the production strongly enough to settle down and just do the work. This story wouldn't benefit from crazy camera tricks or slam-bang editing, so he eschews them. The result is a movie that is epic in scope but focused and economical in method.

Argo is also filled with tremendous performances. In the lead role, Affleck acquits himself admirably, bringing to Mendez an utterly convincing mix of sadness, resignation and self-confidence. As his immediate superior, Bryan Cranston is excellent as usual, and John Goodman and Alan Arkin share a number of great, funny scenes as the Hollywood operators backing Mendez's play.

This is a masterful movie, a throwback of sorts, refreshingly devoid of irony or sarcasm. It's a history lesson, a potent thriller and a meditation on trust and commitment. It is also very much about the excitement, humanity and cross-cultural currency of the movies. R. 120m.

SEVEN PSYCHOPATHS.  I was ready to love the latest from writer/director Martin McDonagh (In Bruges). The cast is spectacular, the premise is original, and the trailer promised violence and jokes in equal measure. It sounded almost obscenely good. But it isn't. Certainly not bad, but maybe even more disappointing in light of "what might have been."

Colin Farrell plays Martin, a drunken Irish screenwriter living in LA and struggling to write his next movie. That movie is called 7 Psychopaths and may or may not be the movie we are currently watching. It's a post-modern movie-within-a-movie concept: a clever idea, but a little wanting in the execution. Martin's loony best friend (Sam Rockwell) operates an apparently profitable dog-napping enterprise with a business partner (Christopher Walken). When they ransom the shih tzu of an unbalanced crime boss (Woody Harrelson), they have to go on the run to avoid reprisal.

The trailer implied brisk and madcap, but it's as bleak and deliberately paced as McDonagh's previous feature. It's also punctuated by an excess of gratuitous bloody violence and a number of plot elements that should have stayed in the notebook they were culled from.

On the plus side, the actors, across the board, are very good. Walken gives one of his finest performances in years. And some of the dialogue crackles and surprises, but that just highlights the lines that don't work. And that's a snapshot of the movie's overall lack of follow-through. The script is full of clever, entertaining ideas, but they're diminished by overcrowding. Given some sure-handed editing in the early stages, Seven Psychopaths could have been a classic, but it will probably be forgotten. R. 110m.

PARANORMAL ACTIVITY 4. Hey, look! It's another Paranormal Activity movie! The fourth one! Probably the paranormalest yet! R. 88m.

The Arcata Theater Lounge is gearing up for Halloween with one of the most pants-wettingly scary movies of all time, William Friedkin's 1973 classic The Exorcist, Friday at 8 p.m. If you go to the theater with any bejesus in you, this movie will scare it right out. Sunday's feature should be easier on your blood pressure: Barry Sonnenfeld's sci-fi comedy Men in Black (1997) represents Hollywood escapism at its finest. 6 p.m. Staying with the comedic alien theme, next Wednesday's Sci-Fi Pint and Pizza Night features The Lost Skeletons of Cadavra, a spot-on 2001 spoof of sci-fi B movies from the '50s, featuring mad scientists, a seductive beatnik and an alien named Kro-Bar. That will be followed by The Eye Creatures, a half-assed 1965 flying saucer flick. MST3K quips sold separately.

Next Tuesday, the Humboldt County Library's "Based on the Book" series continues its retrospective of classic noir films based on Raymond Chandler's hard-boiled private eye Philip Marlowe. This time out it's Lady in the Lake (1947), with Robert Montgomery as Marlowe. The screening will be hosted by Michaeal Logan.

ATLAS SHRUGGED PART 2. Critics and audiences got in on the shrugging, too, the former calling this adaptation of Ayn Rand's propaganda novel "a disaster" and the latter staying away in droves. PG. 112m.

LOOPER.  Joe (Joseph Gordon Levitt) is a mob hitman in the future who's supposed to kill an older version of himself (Bruce Willis), sent back from the future's future. Smart, trippy sci-fi. R. 118m.

PITCH PERFECT. Anna Kendrick heads the cast in a music-drenched tale of an all-girl a capella group striving to win a championship. PG13. 112m.