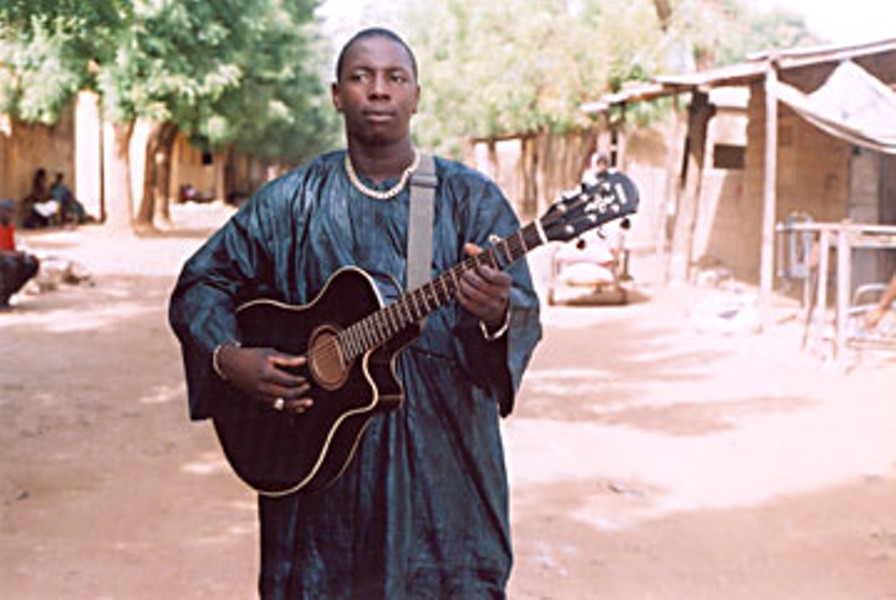 As any musicologist will tell you, the blues comes from Africa. Nowhere is this more evident than in the bluesy music that comes out of Mali, particularly as played by the late great guitarist Ali Farka Touré, whose sound was famously described by Martin Scorsese as "the DNA of the blues." Before he died in 2006, Ali made one last recording, contributing to the debut album by his son, Vieux Farka Touré, a youngster whose name translates as "old." While he took the torch from his father, Vieux is using it to light his own way. His eponymous Afro-blues album was followed this year by Vieux Remixed: UFOs Bamako with Cheb I Sabbah, Karsh Kale and Nickodemus among those handling remix chores.

"Music is personal expression," says Vieux. "Everyone has their own ideas and their way of doing things. No one can replicate what someone else has done. I am working to follow my father's path, but that path continues into new areas. I am of a new generation, so there are things that inspire me in today's world that I put in my music, just as he did in his time."

Vieux spent the summer touring the U.S., including a series of gigs where he was part of a James Brown tribute show with J.B. alums Pee Wee Ellis and Fred Wesley joined by Cheikh Lô and others. Now Vieux is working with a five-piece band that mixes African and American musicians and styles. They hit Arcata Tuesday, Sept. 16, for a show at the Van Duzer Theatre.

Arcata Playhouse proprietors Jacqueline "Jackie" Dandeneau and David "Guapo" Ferney are so talented and nice that you almost forget they're Canadian (just kidding). They've booked a phenomenal collection of cool shows to their space in the old Creamery, turning it into a major cultural resource. Friday, Sept. 12, they bring in a bunch of friends for another edition of Clüb Shampoo; this one subtitled "Teased Up." The show, hosted by David and Jackie, is a review featuring a who's-who of local talent: Tim Gray, Marla Joy, Mike LaBolle and Tim Randles make up an ad hoc house band called The Frosted Tips. (The event p.r. was littered with further hairdresser references, but we'll forego them here.) Then there's Lila Nelson and Jaese Lecuyer, both of whom shined in Dell'Arte's Korbel IV, Tyler Olsen (Korbel IV's co-director), Jeff DeMark, Julie and Curtis from Kulica, dancing by Shoshanna, music and dancing by Yo Tango, plus "surprises" untold. J&D note: "Walk-ins are welcome but reservations are recommended." (The show sold out last time.)

The Playhouse comes alive again Monday, Sept. 15, with ace guitarist/songwriter/storyteller Willy Porter. I caught a set by Willie years ago when he was on the road with Joan Baez -- he was really good. More recently he drew raves at one of the Lost Coast Live shows at Ferndale Rep, a cool series, although I never did understand why they kept the performers' identities secret. Willie is touring with Raining Jane, an all-female folk-rock quartet from L.A. who have been up here a couple of times with their friend Sara Bareilles, an ex-local who has been doing pretty well for herself this year. Sara is currently down-under in Australia; next stop, Europe. Maybe she'll cross paths with local floorcore stars Starving Weirdos, who just took off for a three-week Euro-tour: a week on the British Isles (including a gig at London's Millennium Dome) then over to the Netherlands for the ZXZW indie culture festival and on to Amsterdam and Brussels.

Saturday morning might be pretty crazy on the Arcata Plaza with the city's 150th anniversary party in the midst of the Farmers' Market, Magnolia swinging for shoppers and historic displays on the 8th St. side. Mazzotti's plays host to the annual KHSU Music Sale that morning starting at 10 a.m. Expect to find treasures buried amidst box after box of CDs albums by bands you've never heard of. Friday Jamdown host DJ Dub Cowboy will be in the house, mashing up music in many stylees. And yes, there will be vinyl for all you cratediggers.

San Fran's Mon Cousin Belge offer what they describe as "deep faggotry jams" at Aunty Mo's Saturday, with Arrogant Hare opening. Meanwhile honky tonk garage rockers Side Iron headline a show at the Alibi with Portland's Thee Headliners opening. Side Iron includes Keil, ex-Que La and Greg, ex-The Hitch, which reminds me: Last week, I incorrectly identified Jeff, formerly of The Hitch as part of Machete. He was hanging with Machete man Roshawn, also formerly of The Hitch, but Jeff is in The Fire Demons. All of this sort of confusion may be cleared up if the new blog, HumboldtBandsFamilyTree.wordpress.com takes root. Ross from The Delta Nationals is supposed to be helping me with it, but we've both been kinda busy. BTW, The Nats play Saturday with The Bucky Walters at the Arcata Community Center for Arcata 150th Anniversary bash. Should be fun.

Don't forget The Neville Brothers are at the Arkley Center next Thursday, Sept. 18. More on that next week.

It's EarthDance weekend at Black Oak Ranch down in Laytonville. The annual "celebration for world peace and unity" gets underway Friday with Neko Case and Kinky among that day's headliners. Saturday's show includes Digable Planets and Ivan Neville's Dumpstaphunk and many, many others, plus the Prayer for Peace ritual. This year they're also offering Sunday-only tickets and it's a good day with swamp-funksters JJ Grey and Mofro (who play next Thursday at Humboldt Brews), reggae star Anthony B, young Afro-hip hopper K'Naan and Michael Franti and Spearhead all on the main stage. Also playing Sunday, Panjea, an awesome Afro-fusion band led by former local Chris "Toosa" Berry on mbira, and, of late, with ex-String Cheese fiddler Michael Kang.

Did you notice the date on this week's paper? That's right, it's Sept. 11, aka 9/11, another one of those dark days that will live in infamy. The Accident Gallery and the poetry collective A Reason to Listen (Therese Keslin, Vanessa Pike, Nicola Hunt and Brad Wilson) are marking the date with a politically-themed poet's open mike with prizes. Meanwhile in the Kate Buchanan Room, songwriter Jesse Goplen plays for a 9/11 Truth HSU event that also includes a new 9/11 documentary Fabled Enemies. Jesse will debut songs from his upcoming EP, Cowboy,some of them love songs, some with a political 9/11 theme like his last album, September Eleven Blues.

Jesse brought a burn of the new disc by my house last week and showed me his new guitar, a Gibson Custom Shop Super Jumbo Elite Custom, bought with part of a $25,000 sweepstakes prize he won after spending weeks entering every contest he could find online. He played me a tune off the album, a beautiful bluesy thing in a minor key called "Highway 101," written for Kyana, the love of his life. After he left, I spun the disc, and heard songs like "Didn't You Know?" where he asks us to listen to Willie Nelson's take on the 9/11 story. It made me wonder, why dwell on darkness when there's a bright future ahead, one that could be made even brighter by that big beautiful guitar.