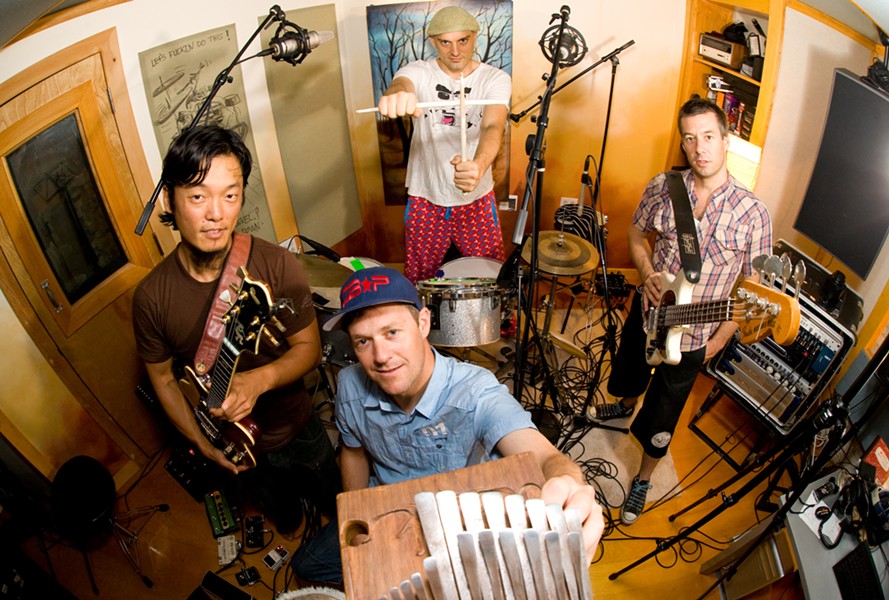 It was 1993 when I first interviewed Chris "Toosa" Berry in an Arcata garage where he was building the traditional Zimbabwean thumb pianos known as mbiras. He'd actually discovered the instrument while attending Humboldt State in the late ’80s.

"The first time I heard the mbira was in the HSU Library," he told me in a call from New York City, his current home. "I would always go through the ethnological recordings there. I checked out this record of Shona mbira music. When I heard it I started crying sitting there in the HSU Library. That's what made me want to go to Zimbabwe. I thought, wherever this music comes from, I have to go there."

Berry not only went to Zimbabwe, he ended up living there for most of the ’90s, studying with Shona musicians/spiritual masters and marrying the daughter of the country's Chief Justice. He also formed a band called Panjea and recorded a hit record.

"The album did really well over there; it went platinum in Africa. But it took a long time to get my feet under me back in the States. People didn't want to hear some white dude playing African music. World music just wasn't that hip back then. There was no label that would support it."

The world music hipness factor has changed in recent years, and since 2002 he's been living in the U.S. touring with a new multinational version of Panjea and finding success. Now he has a new project -- the Chris Berry Trio, aka CB3, with Berry on electric mbira backed by drummer Aaron Johnston and bassist Jesse Murphy, both from the red hot NYC electro-dance band Brazilian Girls.

"It's Afro-electronica," says Berry. "It's like the Brazilian Girls sound, but with African rhythms. It's very dubby with big fat electronic bass sounds, 808-kicks and all that kind of shit. This is brand new. This is the first tour ever of this trio." For the West Coast leg, including a show at the Red Fox Monday, July 20, the band will also feature Michael Kang from String Cheese Incident on mandolin and fiddle. (The Berkeley-based country-rock band High Heat opens.)

The songs Berry wrote for Panjea touched on politics and spirituality; new work for CB3 is along similar lines. "I'm still writing about the same things," he says. "A lot of times I've sung about the evils of the world, but this music is more about the potential for the future. One song is called 'Long Time Coming.' It's basically talking about the new thing that Obama's ushered in. It's been a long time coming, but we feel it coming our way now with positive change that could possibly happen."

Why wait for the reintroduction of the condor? Mendocino's Kerosene Kondors are coming to Humboldt this very weekend for three nights of what they describe as "a volatile mix of roots rock, jug band, outlaw country and backwoods swing that gets feet moving, hearts breaking and jaws dropping." If you liked The Rubberneckers, you'll like this band -- in fact if you were a ’Neckers fan, you've probably already heard the K. Kondors. You'll find them at the Lil' Red Lion Friday, at Six Rivers Sunday and the Alibi Saturday for a birdwatchers' special double-bill with that fine rock 'n' soul band, The Ravens.

Huck Flint also plays a benefit Thursday, July 16, at Mosgo's to help send some folks from Catalyst on a humanitarian trip to Thailand. Reverend Peyton's Big Damn Band is back in town offering another blast of kick-ass foot stompin' Americana that same Thursday at Humboldt Brews.

The StereoFidelics, a duo from Asheville, NC, bring another sort of fiddle music to Muddy's Hot Cup Saturday. Melissa McGinley handles electric violin and drums; Chris Padgett plays guitars, keys and loops everything, turning the duo into much more.

Of course you'll find all sorts of stringy music along with many other kinds at the Humboldt Folklife Festival, which begins this weekend. Look for the pull-out in the middle of this paper for full details.

Saturday the Arcata Theatre Lounge presents Available Jelly: The Trio, with Gregg Moore of Bandemonium fame (or infamy) joined by his reedsman brother Michael and his drummer friend Michael Vatcher. (They also play the Arcata Playhouse July 26.) As Gregg explains, the two Michaels are "HumCo jazz players who moved to Amsterdam in the 1970s to influence EuroJazz." What should you expect from AJ? The unexpected. "Just when you make up your mind it's an ethno-centric acid-polka orchestra blowing jazz with a demented Dixieland mariachi band in the Bulgarian beergarden, [we'll] break into a James Brown tune," says Gregg.

Atlanta GA's Entropy Funk lays down funk in the tradition of James Brown, Funkadelic, Prince etc. at the Red Fox Friday. Readers of our alt. weekly counterpart in Atlanta, Creative Loafing, chose them as the "Best R&B/Soul/Funk Act" in that southern city, which seems to indicate a funky good time is in store. More funk Saturday at HumBrews: The L.A.-based neo-soul jazz-funk combo Big Organ Trio features the wailing Mike Mangan on Hammond B3. And if you're making a 299 river run, you might want to end the day with the always-funky Bump Foundation, who play at Simon LeGree's in Hawkins Bar Saturday night.

Due to a data entry problem in the Journal office last week there were some errors as to who was playing where in our club listings and in the Hum. (Sorry.) One involved the local band, Papa Bear. Rick Colburn, bassist for the band, called, but not to complain about the mistake -- he didn't like my capsule description. "We want people to know, Papa Bear does more than play 'hippie jams,'" he said. "We play a wide variety of music: Dead covers and other psychedelic stuff, but also blues, rock and country. As our guitarist says 'We play so many styles, you'll have to like one of them.'" We were a week off with our incorrect listing. Papa Bear plays Friday night at the Wave, as part of Bikes by the Bay, re-branded as The Bare Necessity.

The following night Bikes by the Bay brings the venerable rocker Merv George to the Sapphire Palace -- he's been playing music locally for more than four decades. Meanwhile The Roadmasters play country-rock in the Wave -- they've only been together since 1976.

And speaking of band re-branding, the outfit formerly known as G.R.A.S.S. shall henceforth be known as The Grass Band. They play Friday at Nocturnum, opening for The Malone. A reminder, the "grass" in their name is not because they're a something-grass stringband -- they're an electric "jamfunkblues" band. Their grass is green, the kind those who would re-brand Humboldt would like you to forget. East-L.A. hip hopper Awol One hits Nocturnum Tuesday touring behind his new joint, Owl Hours. Then on Wednesday Wayne "The Train" Hancock comes in with a dose of juke joint swing, Texas-style. Nocturnum's Gil Miracle said he'd keep it eclectic and he's doing it. Yes, I'd say the space formerly known at OH's Townhouse has successfully re-branded itself.