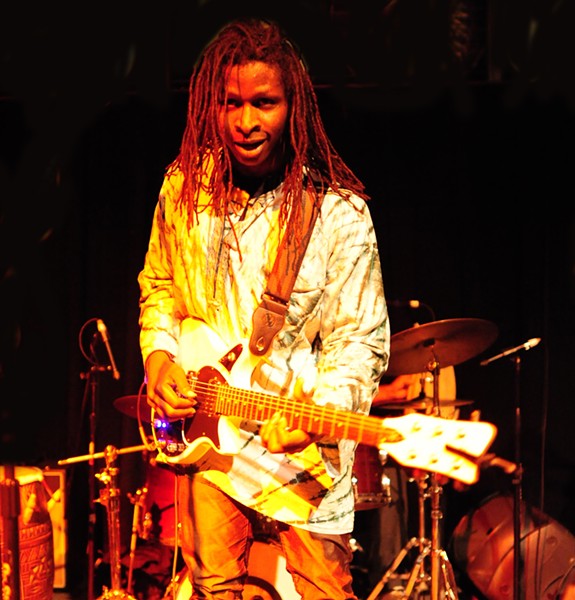 You might call it North African trance music. Leaders in the movement include bands with a looping hypnotic electric guitar sound driven by an insistent beat like Tinariwen and Group Doueh. With Portland's Dusu Mali Band, led by Malian guitarist/percussionist Ibrahim Kelly, a touch of American jamfunk is added to the mix creating an Oregonian take on the Afrotrance style.

Kelly, the nephew of the late great Malian guitarist Ali Ibrahim "Farka" Touré, moved to the U.S. a few years ago. A master drummer back home, over here he picked up guitar and began exploring new musical directions. Dusu Mali Band began with an ad hoc collaboration, a combo put together by pianist David Ornette Cherry, son of jazz great Don Cherry. David's godfather Ornette Coleman was booked at a Portland jazz festival; the fest wanted David, who had just moved to town, to do a set.

"David was into Malian music and he knew Ibrahim -- who was also new to Portland," explained Tah Rei, Dusu's keyboardist/winds player. "We all got together and formed a group to play the festival."

Tah Rei, originally from San Diego, came out of that city's jazz/jamfunk scene. He was a B-Side Player for a while, then moved on to Bay Area world beat band Hamsa Lila. He fit right into Cherry's multi-kulti vision. When that project ended he and Kelly kept working together.

"Our goal was to sing his songs, which are in his language," said Rei. "Our fusion is definitely not traditional Malian style -- Ibrahim wanted a fusion -- he didn't want the music to sound like traditional music from where he came from." It definitely was not his guitarist uncle's style of music. "Ibrahim played some guitar, and he grew up around guitar music, but he was a drummer," said Rei. "Applying his percussive style, he instantly became really great at the guitar. ... We've taken things pretty far out -- now he wants to get back to some more traditional stuff."

See where Dusu Mali Ban is taking Afrotrance Saturday when the band plays at the Jambalaya. See you there.

Dehlia Low calls its take on roots music "Appalachigrassicana," localizing Americana and adding the requisite -grass in the middle, but you could just call it Southern mountain music. Formed in Asheville, N.C.'s fertile roots scene by high lonesome harmonizers Anya Hinkle (also a fiddler) and Stacy Claude (a guitar picker), the band pulls together top notch sidemen on mandolin, Dobro and stand-up bass. The result is music that sounds authentically traditional, yet fresh. They've just released their third album, Ravens & Crows, on Rebel Records, having enlisted Travis Book from The Infamous Stringdusters as producer. A West Coast CD release tour brings them to the Red Fox Tavern this Thursday, Aug. 4.

Earlier the same Thursday, Latin guitar world fusion band Incendio plays at C Street Market Square for the Eureka Summer Concert Series. Next Thursday: The Kaye Bohler Band, who you may remember from Blues by the Bay (Bohler will be back for the next BbtB too, Sept. 3 and 4, Halversen Park).

The first Saturday of the month is coming up, which means another Arts Alive! You can read about the various art openings in Muse; as usual, there's also mucho music around town. Highlights include: ace percussionist and vibes player Mike LaBolle at the Graves Museum (he's also playing at the Eureka Inn Friday night); Small Axe rocking the Eureka Inn (on Saturday); saxophonist/flautist Susie Laraine leading a jazz trio at the new Sewell Gallery and The Bare Necessities jamming on Dead tunes and such at Indah Bali. Solitary man Brett Bailey does his Neil Diamond covers at Little Shop of Hers; Sheik vs. Wong fights a hip hop battle at The Works; Trinidad Goodshield lays down indigenous soul at the American Indian Art and Gift Shop; Mike Craghead and Sari Baker are together again at Old Town Coffee and Chocolates; and, post-AA!, Dr. Squid plays rock music for dancers at Steve and Dave's.

The Sequoia Park Zoo's Twilight Summer Concert series resumes Saturday evening with local reggae favorite Ishi Dube and bluesy Mojo Brown providing the music. As usual with this sort of affair they'll have beer and wine, snacks and things for kids to do -- look at the otters or the monkeys, for example.

A bit later that Saturday night, you're invited to grab your cowboy hat and head on down to the Arcata Playhouse for the Country Cabarette, a benefit to help support Rotary Club of Arcata Sunrise's extreme makeover of the theater, which so far has resulted in an improved electrical system, a cool new paint job in the lobby and new (to the Playhouse) seats (discards from the Van Duzer) that are quite comfy. Your Cabarette host Ross Rowley will serve as guide to a unique show with The Lonesome Roses plus Cadillac Ranch, with the latter backing special guests, including Rowley's D-Nats bandmate Steve Irwin, Rose Armin-Hoiland, Halimah Collingwood and the Playhouse's resident chanteuse Jackie Dandeneau.

Saturday night at the Mateel, it's the first in a series called Concerts for the Cubs, shows leading up to a planned big outdoor concert to raise funds for South Fork High School, which like all schools at this point is strapped for cash. They'll have music by the South Fork School Band and local outfit Angels Cut, then conscious hip hop by Wisdom and homegrown reggae by the ubiquitous Ishi Dube. Come early for a BBQ dinner and bring extra money for the raffle and silent auction. If nobody wants to pay taxes to support education, this, sadly, seems to be what we're left with.

Back-to-back shows at the Riverwood Inn this week: Thursday it's Chief Greenbud, an itinerant songwriter from Tennessee whose dope-themed repertoire, with songs such as, "It's 4:20 Somewhere," "Smoke As Much As You Like" and "A Friend With Weed," just might find an audience in SoHum. Friday night the Ave-o-Giants inn brings back The New Iberians, a Portland band named for a Louisiana Gulf coast town, playing Cajun-style zydeco and blues. Hot stuff.

Portland electropop band Starfucker, aka Strfckr, is on a Cali tour that will take them to the Outside Lands Music and Arts Festival in San Francisco's Golden Gate Park next weekend to play alongside Phish, Arcade Fire, MGMT and too many other hot bands du jour to list here. But first they play a show on Monday, Aug. 9, at the way out of the way Mattole Valley Community Center in Petrolia. Why? Well, Petrolia resident Sean McFarland knows Shawn Glassford, the bass player in the band. When he saw the proverbial Portland south gap in the band's schedule he suggested a Humboldt show -- the Petrolia gig was the result. McFarland's band, Me vs. You, will open (showtime, early: 8 p.m.).

The somewhat unexpected closure of the Eureka Alibi sent shock waves through the U-freak-a indie scene, leading one musician, who had been booking shows at the now-shuttered club, to wonder on Facebook, "What are we going to do? Send every band to the Little Red Lion?"