Ale in the Castle 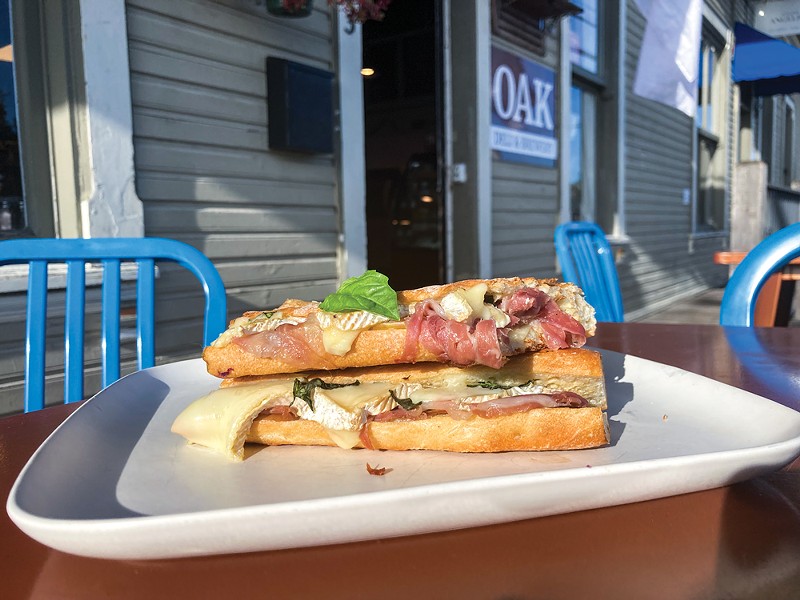 Photo by Jennifer Fumiko Cahill The prosciutto and brie panini with apple served on a baguette. 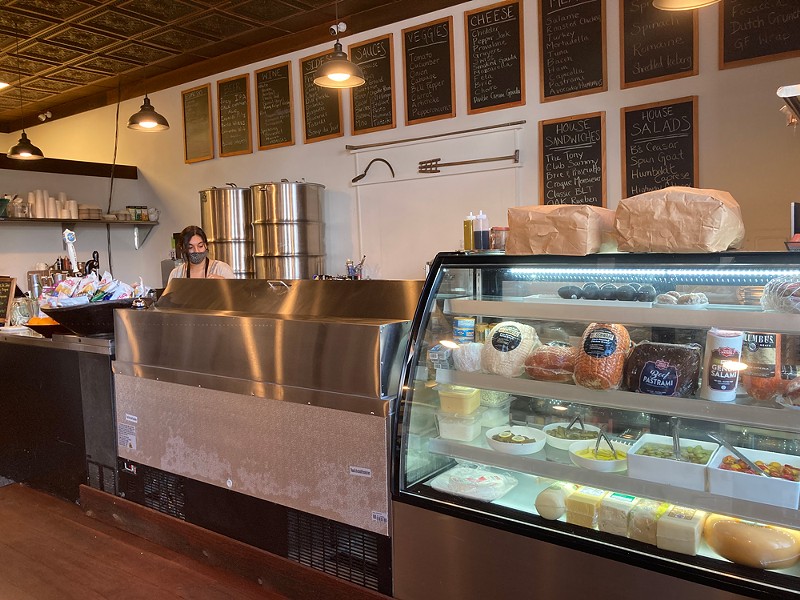 Built on Arcata's H Street in 1885 as the former clubhouse for the Knights of Pythian, Pythian Castle has lived many lives and is currently inhabited by multiple clothing shops including a grand-papi of local thrift shops, the Vintage Avenger. But there has been a small restaurant space nestled in among the retail shops that had yet to find its forever match — like a shell without its hermit crab. Because the space has turned over a few times in recent history, it is easy to overlook that a new business has moved in. But let me assure you, Oak Deli and Brewery is not to be overlooked.

After a career of working in events in Southern Humboldt came to an abrupt halt during the infamous pandemic, Bryce Cherpelis needed to make a hard pivot. Cherpelis' parents had been home brewing since 1993 and when they moved to Florida, Cherpelis called a quick "dibs" on the brewing equipment as well as the family recipe book. Paired with his 10 years of experience working in a deli, Cherpelis saw the perfect new venture, which just launched in January.

The interior of Oak Deli and Brewery is clean and simple and shows that it has room to grow and continue to make its mark. Though the simplicity of the space is misleading, as Cherpelis renovated the whole interior — including a reclaimed teak floor and new, special electrical wiring for brewing — all in a successful transformation from the salon that it had been most recently. The true focal points of the shop are the impressive deli case and the even more impressive fermentation tanks behind the counter.

But let's not bury the lede here — the beer is delicious. At the moment, Cherpelis is only producing a few beers at a time and rotating them regularly, so there is always something new to try. When I went to taste with Cherpelis, the two he had on tap after a very busy weekend with Oyster Festival, were the Redwood Creek Sessions IPA, which was a more "daytime" IPA as Cherpelis described, with a lower, 4-percent alcohol content and a soft stone fruit flavor (would absolutely recommend), and the Berliner Weiss Sour, which was beautifully complex with a 5-percent alcohol content, notes of bananas foster, brioche, pineapple and a slight touch of hops (my personal favorite and I went back for a full pint).

I also got the opportunity to taste some new, unfinished beers that were still wrapping up the fermentation process. And even without bubbles and final touches, they were delicious and I could tell that they were going to be fantastic. The Vienna Pilsner, which is brewed from an Austrian grain, had slightly more hops than the other two, with unique notes of Meyer lemon, tangerine and orange blossom; the Mexican Lager was lighter, with notes of white nectarine, apple, lemon and spice; and the Pale Red Ale had a bigger body, more hops and a scrumptious red delicious apple flavor. All of these may be on tap by the time this article publishes but, honestly, I hope that they were popular enough that they're already on to the next round.

The boutique nature of the small brewery is what really makes each product special. The hands-on techniques that Cherpelis takes ensure quality, as well as fewer chemical cleaners, as he takes the time to "care about every corner of the kettle." And the full grain he uses rather than malt (which is a dehydrated, concentrated product) means a longer extraction process, but also some incredibly nuanced flavor.

Though the beer certainly is the star of the show, one of the things that I was very impressed by was the quality of the food Oak Deli and Brewery offers. Ingredients are sourced locally (including the ever-delicious Brio Breadworks). The food is simple, but excellent because as Cherpelis says, "We use really good product and put it together." When I was there, the soup of the day was a chicken wild rice, which I all but completely inhaled, and I also had a chance to try the brie and prosciutto sandwich and the Oak Reuben, which was spectacular.

Though the business is still new, it's just getting started. For now, Oak Deli and Brewery is open Wednesday through Sunday from 11 a.m. to 7 p.m. with entertainment and events on Fridays from 7 to 9 p.m. Beers rotate regularly, sticking around for two to three weeks at a time and plans are in the works to expand to filling growlers, as well as selling in local shops soon. But it doesn't stop there. Cherpelis says the next goal is to expand into an offsite brewing space to increase from a 100 gallon production to about 1,000 gallons, as well as expanding the packaging and distribution of the product. And from what it sounds like, that's just the next step and there is so much more to come.

Editor's note: This story has been updated to correct the name of Oak Deli and Brewery.