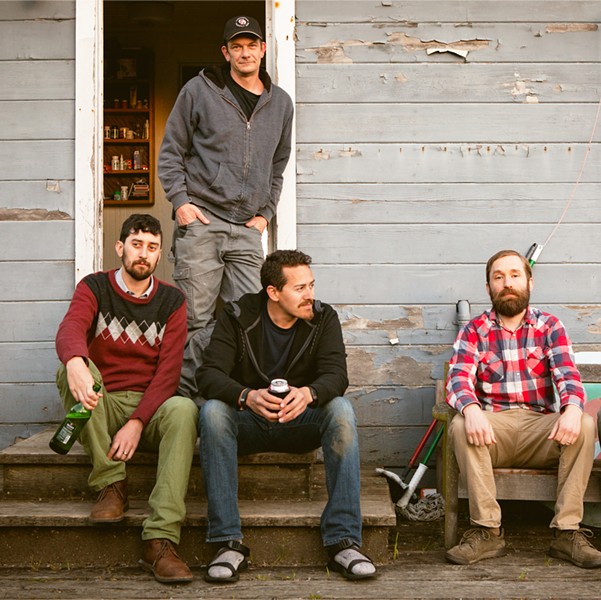 Photo by Adam Taylor, courtesy of the artists The No Good Redwood Ramblers play Humbrews at 9 p.m. on Saturday, Dec. 10.

I've been thinking about the stage a lot lately, and live music in general. The last time I played a live show (before this year) was Sept. 11, 2017, when I played guitar for a krautrock-influenced jazz group that my friends and I threw together to open for my buddy Mike Dillon's band. It was fun but at the time I felt like things had come to a correct end, and my muse had, in the words of my friend Bell, moved into another room. I was writing again and enjoying that more. Lately though, I have been missing playing. I spent my 20s in New Orleans jamming live, touring and recording. I do miss it, although that seems like a lifetime ago and the current economic conditions are harsh for anyone trying to become a road dog. Every week I write about people who, despite every outward pressure, manage to pull off the unthinkable and take their music on the road. The margins are so thin these days that when you go out to see a touring band, you know that they are in it for the love of the game. Trust me, there are very few incentives to maintain that lifestyle and touring can be a lonely beast. I have slept in horrible spaces, I have blown my eardrums to pieces, and I have looked for quiet places to read a book and eat a sandwich before soundcheck. I have met strange and beautiful people across the lower 48, I have played in front of hundreds of people, and also played a dead room with only bartenders on a weeknight. I have been punched, mortally threatened, had piss poured on me (you can always tell it's not beer because it's warm), and spit hot blood at a shrieking mass of bodies. I have counted the terribly boring hours driving through Kansas or Oklahoma, where brown skies merge with the landscape to create a vision of Hell. I have screamed into a microphone and seen the crowd ripple like the heat aura off a smokestack. I have dragged myself across the boards like a wounded hyena in the interest of entertaining the crowd.

So, I know a bit about what I'm talking about when I salute the people satisfying your nightlife's culmination. Even on an off night, you can try and get a taste. I'll be right here with the thumbs up.

The Outer Space is putting on a live music and drag show hosted by Thrash & Recycling. This all-ages event is a masks-required affair and, while the door charge is a sliding scale $5-$20, no one will be turned away for a lack of lucre. Oh, and the whole shebang kicks off at 7:30 p.m.

Every so often there's a band that I find myself writing about repeatedly that simply occupies its own territory in the landscape of our culture. One of those lurching mutants that scuttles around the margins of society with enough force to overcome its oddness and allow it to exist as a rolling juggernaut. Well, tonight you can catch two of those bands on the same bill. I am, of course, talking about the show at the Jam tonight at 8 p.m., where Captured By Robots joins forces with The Sturgeons. The latter is my favorite weirdo heavy metal power trio in all of Humco, while the former has to be seen to be believed: one man, backed up by an animatronic band of robotic musicians, spraying out grinding metal for the lucky elect among the audience ($15). Huzzah.

For 15 years, the No Good Redwood Ramblers have been tossing around their own special brand of stomping folk and bluegrass for the assembled people of the county. However, all good things must come to an end and I am told this gig at Humbrews tonight at 9 p.m. is likely the band's last, as the various members have other projects going to occupy their time. So, consider this a last waltz, and expect multiple sets from the headliners and cohorts Horse Mountain. If you are a fan of the band, or bluegrass and folk in general, do not miss this show ($20, $15 advance).

Put a big X on this day, as I really can't find anything to recommend outside of the regular ongoing open mics and various karaokes. What can I say? It's the end days of autumn and winter is coming, oh you fair children of the summer.

Poet and author Eileen Myles will be doing a reading at Northtown Books this evening at 6 p.m. The source of their oratory is their Grove Press anthology "Pathetic Literature," which examines works of pathos by unknown authors as well as bigger bangers like Franz Kafka and Gwendolyn Brooks. Would you like to hear a line I wrote to showcase the difference between pathos and bathos? Well, tough shit, here it is anyway: "Pity me people, and weep at my woes, for the gods have made it such that my life has failed to fall apart dramatically, and I am instead finding myself clipping coupons and shopping at Safeway." Anyway, I believe the event is free, but you might want to pick up a book or two.

The Outer Space is hosting a DIY indie music free-for-all tonight and those of you in that community should prick up your ears at this one. Brooklyn-by-way-of-Kansas-City singer-songwriter Scout Gillett is the touring headliner, supported by Parisian-Humboldt transplant Brisha Roché, and local wonderman Ryan Spencer, who will perform with members of Blood Hunny and Los Perdidos under the moniker Tsuga Ryan at 7 p.m. ($5-$20 sliding scale).

Richards' Goat, home of the Miniplex, has been putting on something this month that has caught my eye. Every Wednesday evening, starting at 5 p.m., you will find a mini-expo by a local artisan whose goodies will be on display where the bands usually set up their merch on show nights. Tonight's featured creator is Rustyfern Embroidery, which I am informed makes unique designs and images on everything from lingerie to patches. Perhaps consider doing some local shopping here tonight for your holiday gifts.

Collin Yeo (he/him) has been thinking about a favorite quote by Eubie Blake: "Be grateful for luck. Pay the thunder no mind — listen to the birds. And don't hate nobody." He lives in Arcata, where he is trying for the trifecta.