Dolemite is My Name and The King 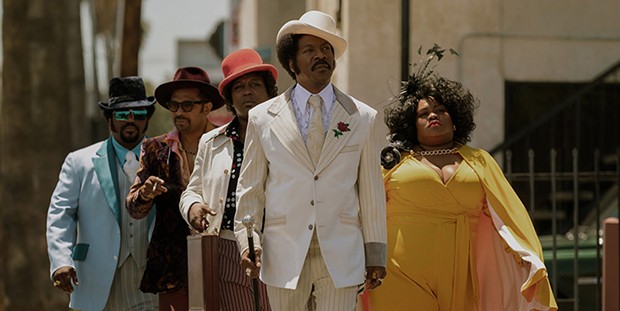 DOLEMITE IS MY NAME. To fans who identify Eddie Murphy by his early movies — 48 Hrs. (1982), Trading Places (1983), Beverly Hills Cop (1984) and Coming To America (1988) — and/or his legendary if, in hindsight, occasionally lamentable stand-up specials Delirious (1983) and Raw (1987), and his run on Saturday Night Live (1980-84), it can feel like he pulled something of a disappearing act. Untrue, of course, as the ensuing decades brought him tremendous commercial success as the voice of a donkey and in various remakes of old studio "classics." If one were not in the business of sharing movie night with one's children, one could conceivably have missed just about everything in which Murphy starred in the years between, say, 1996 and 2010 (I might be among such people). Since then he popped up in the almost-funny, almost-satirical Tower Heist (2011), doing a PG-13 impression of the comic and leading man who so dominated the 1980s, but followed it up with the inscrutable, nearly unwatchable A Thousand Words (2012). One can't fault the guy for earning but from a distance it has, for some time, looked like one of the most hilarious, incendiary comedians of our time had let the fire go out.

Contrary to experience, though, there may be hope: Coming 2 America is moving into production and Netflix reportedly paid Murphy an obscene amount of money for his first stand-up special in more years (decades) than one would care to mark. These remain unproven (though hopeful) commodities. In the meantime, we have Dolemite Is My Name and it would appear to be a good omen.

The fractious, dissolute United States of the 1970s produced a string of movies that would come to be known collectively as Blaxploitation cinema. A discussion of whether this is an accurate (tolerable?) classification is better left to someone better referenced and more scholarly, Dolemite Is My Name as case study alone speaks more to the differences of these movies than to their superficial similarities.

In mid-'70s Los Angeles, would-be singer Rudy Ray Moore (Murphy) toils in a record store, occasionally emceeing at a club, feeling as though his dreams of stardom have been killed before they had a chance to live. Inspiration strikes in during an offhand conversation with a local alley habitué, though, and the character of Dolemite is born. Rudy, a sensitive, articulate artist type, dons a wig and flamboyant suits and remakes himself as a caustic rhyming pimp, the swaggering progenitor of much of the dirty rap that would follow. Unable to find industry backing, Rudy records a Dolemite album on his own dime and starts selling it, essentially out of the trunk of a car. It's a localized wildfire success, which in turn garners the attention of a smallish record label. Rudy starts getting some legitimate promotion, sets out on a tour of the Deep South and begins to build a broader fan base, while actually getting paid in the process. He sees the potential for more, though, particularly in the flickering light of the movie projector. Leveraging his album royalties and tour revenue, Rudy pulls together the resources (including a mostly green crew) to make an independent movie.

That movie, Dolemite (1975), could easily be called terrible. After I first saw it, I would likely have echoed many of the critics of the day in calling it amateurish, tone-deaf and ridiculous; of course, the same could be said of most of the projects of my youth. Through the lens of Dolemite Is My Name, though, the movie can be seen as a triumph of teamwork, a joyous celebration of the ridiculous and of the commitment to a vision, however questionable others may find it.

Director Craig Brewer (Hustle & Flow, 2005) and his team build a lovingly shabby version of the L.A. of the day and the cast, with Murphy the triumphant standard-bearer, bring their characters together as a family within it, a cohesive unit joining to achieve a creative goal in the face of tremendous adversity. It's a foul-mouthed, heartwarming tribute to a movie that may not be much good but that represents something very good indeed. R. 117M. NETFLIX.

THE KING. "Prestige pictures," be they costume dramas, historical epics or what-have-you, don't generally pique my interest. Nothing against them but for me they more often than not lose their intended impact in the breadth of their scope. One can't have grandiosity without grandeur, though, and so there are always examples to disprove my thesis. The King, directed by David Michôd from a script he wrote with Joel Edgerton, is one that almost always transcends its self-imposed limitations.

The England of Henry IV (Ben Mendelsohn) is a country at war with itself, just as the king's life draws to a close. By unfortunate circumstance, his wayward, usually drunken son Hal (Timothée Chalamet) ascends to the throne, capable but perhaps ill-prepared to lead. He enlists his bearish best friend Falstaff (Edgerton), a combat veteran and bon vivant as his closest advisor, and eventually leads his nation into war.

I've many times sung the praises of Edgerton, both as writer and actor, and this only yields more reason to do so. Ditto Michôd (Animal Kingdom, 2010), whose previous work I have enjoyed, if with some reservations. The pace may sag a bit in the second act but overall The King is beautifully photographed, exceptionally acted and intelligently written, even if it is an epic. R. 140M. NETFLIX.

DOCTOR SLEEP. Ewan McGregor stars as Danny Torrance from The Shining, all grown up and trying to save psychic kids from an evil entity. BROADWAY, FORTUNA, MILL CREEK, MINOR.

LAST CHRISTMAS. A holiday rom-com about a gift-store elf (Emilia Clark) who's had a run of bad luck and a near-death experience. With Henry Golding and Emma Thompson. PG13. 102M. BROADWAY, FORTUNA, MILL CREEK.

GIFT. Documentary about the creative process of giving and gift-based cultures from a Roman museum to Burning Man. NR. 90M. MINIPLEX.

CURRENT WAR. An Edison, Tesla and Westinghouse (Benedict Cumberbatch, Nicholas Hoult, Michael Shannon) duke it out to market their electrical systems in this historical drama and maybe we ended up with the wrong one? R. 107M. BROADWAY.

FANTASTIC FUNGI. Mycological documentary with time-lapse footage of mushrooms and a dive into their history. NR. 81M. MINIPLEX.

HARRIET. Director Kasi Lemmons' biopic about Harriet Tubman's (Cynthia Erivo) escape from slavery and crusade to free hundreds of others via the Underground Railroad. Put her on the $20 already. PG13. 125M. MINOR.

JOKER. The supervillain gets the sympathetic (but not vindicating) origin story treatment with an excellent and creepy Joaquin Phoenix amid a grimy, brutal Gotham. With Robert DeNiro calling up King of Comedy vibes. R. 121M. BROADWAY.

MALEFICENT: MISTRESS OF EVIL. Angelina Jolie is back in the horns to block Aurora's (Elle Fanning) wedding and throw down with Michelle Pfeiffer. With a winged Chiwetel Ejiofor. PG. 119M. BROADWAY, FORTUNA, MILL CREEK.