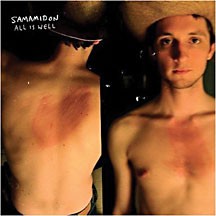 The past several years have been bumper-crop years for singer-songwriters following down the path of what is loosely defined as contemporary "Americana." The folk songs rescued and documented by legendary musical archivists Harry Smith and Alan Lomax have found a resurgence and inspired an attentive younger generation. Again. Harry Smith's collection of folk songs, The Anthology of American Folk Music, released by Folkways Records in 1952, gave birth to a new generation of folk musicians and songwriters in the 1960s. The new wave of folk artists that make up this new folk/Americana scene, sometimes pigeonholed as "freak folk," have moved onto a larger plateau, drawing on "folk" influences from here and abroad, often blurring or erasing any borders of what folk means, while embracing the eclectic — the use of archaic and acoustic instruments, employing them with modern techniques (such as incorporating tape loops, field recordings, and other sampling) and modern orchestration. The outpouring of this new "movement" has been overwhelming, engaging and fascinating, including Sufjan Stevens, CocoRosie, Iron and Wine, Nina Nastasia, Bonnie 'Prince' Billy (Will Oldham), A Hawk and A Hacksaw, Antony Hegarty, Devendra Banhart, Vetiver, Pete Molinari and Arcata's The Beat Nun, just to name a few.

Sam Amidon's new release All Is Well follows down this wide path, with a collection of traditional songs, reinterpreted and arranged by Amidon, composer Nico Muhly and producer Valgeir Sigurösson. All Is Well successfully blurs musical definitions and genres, while sounding simultaneously "old" and "new." Amidon's singing, often in a soft mumble, makes one think of the Appalachian Mountains. Only Amidon is from Vermont. His previous recording, But This Chicken Proved Falsehearted, is a logical starting point, also comprised of traditional and contemporary songs with Amidon on vocals, banjo and guitar, accompanied mainly by his younger brother Stefan Amidon on drums and percussion. It should also be noted that Sam Amidon had previously released a collection of traditional Irish songs entitled Solo Fiddle. And he has participated in other band projects, namely Brooklyn's Doveman and Stars Like Fleas.

Musical wunderkind Nico Muhly, a graduate of Columbia and Juilliard who worked as an assistant to Philip Glass while still an undergraduate, orchestrated and assisted with the arrangements. He uses a chamber orchestra to underscore Amidon's sleepy vocals and sparse guitar, banjo and occasional fiddle accompaniments. A fellow Vermont native, the multi-instrumentalist Muhly also contributed the piano parts. Amidon and Muhly have cooked up an orchestral score reminiscent to Aaron Copeland's Appalachian Spring, a 1944 composition originally written for a Martha Graham ballet. Subtle uses of strings, woodwinds and brass provide a lush, yet minimalistic, counterpoint to Amidon's plucking and vocal delivery. Songs such as "Little Johnny Brown," "Saro" and "Little Satchel" unfold, expand and bloom into an open, full sound.

Credit should also be given to Icelandic producer Valgeir Sigurösson, whose Greenhouse Studios, in Reykjavík, has catered to musicians and songwriters including Björk, Bonnie 'Prince' Billy (The Letting Go) and CocoRosie (Adventures of Ghosthorse and Stillborn). Sigurösson understands the use of space, and he allows All Is Well to breathe, so to speak, with each song having its own pace and rhythm, best exemplified in the majestic "Wild Bill Jones."

One hopes that the talented young Amidon will release a collection of self-penned songs in the near future. However, All Is Well displays his achievements: resurrecting traditional American songs and reinterpreting them in a new form is nonetheless astounding, refreshing and sadly beautiful.