All the Stage's A World 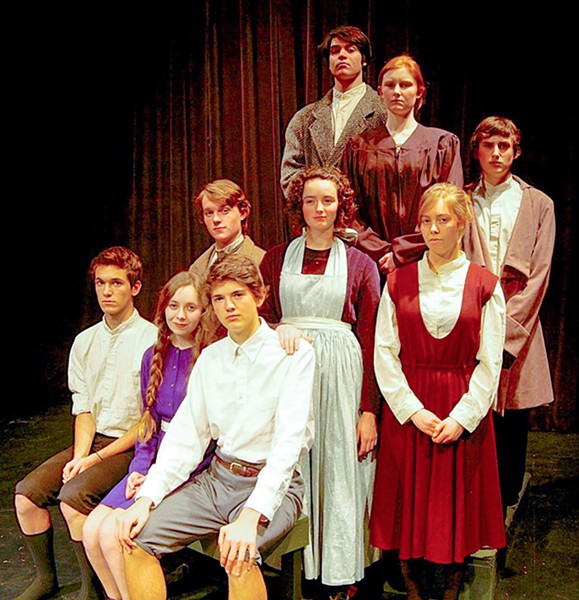 Arnold Waddell and Shelley Stewart in the Aristophanes comedy Women in Congress now at NCRT.

In ancient Greece, Athenians of all classes and in great number attended the tragedies and comedies of the spring festival. Much of what we know today as theater began there, including a profound purpose.

Through the vision and artistry of one playwright combined with the performances of skilled actors, society could examine itself: its rational and irrational powers, its strengths and weaknesses, good and evil in complex human combination. The plays evoked thought and debate, as well as tears and laughter. In simple and mysterious ways, the theater was essential to the health of their society.

Now, some 2,500 years later, two plays from the Greek golden age are on stage at the North Coast Repertory Theatre in Eureka: the tragedy of Oedipus the King by Sophocles and the comedy Women in Congress by Aristophanes. They are each played on a simple set with largely the same group of actors.

There is a plague in Thebes as Oedipus the King begins, and citizens appeal to their king Oedipus to heal the city as he has before. Oedipus learns that to do so he must find and banish the killer of his predecessor.

Calder Johnson is a regal but impulsive Oedipus — sincere and determined, but arrogant and impatient, whose good heart battles with his hot head. Shelley Stewart is an impressive queen Jocasta, Dmitry Tokarsky is her inscrutable brother Creon, and Bob Service is the blind prophet Tiresias.

Director Michael Thomas approaches this tragedy fairly realistically, as a kind of murder mystery. Without the ritual and special effects of some productions, the emphasis is on clarity. The actors speak clearly and directly.

This approach is also served by the modern adaptation by Stephen Berg and Diskin Clay. It lacks the poetry of some translations but preserves the important imagery of health and sickness, light and dark, sight and blindness, as well as the basic story that has reverberated through the ages.

The opening night audience responded audibly to revelations (especially when they got the implications before the characters did). They left the theatre with enough of what they needed to ponder and debate the questions of fate and free will, morality and destiny that this play has always inspired.

Comedy is a funhouse mirror reflecting human weaknesses and excesses in daily life. Aristophanes is the original comedian of sex and politics, and in Women in Congress, of sexual politics. The women of Athens don their husbands' cloaks to take over Congress and start a revolution. While in disguise, they hear what men say to each other about the women.

The roots of commedia dell'arte are especially discernable in this modernized version by Jules Tasca. Playing in masks as the Greeks did, Shelley Stewart is the vibrant leader Praxagora and Arnold Waddell is her befuddled husband Blepyrus. The comic cast includes Taylen Winters, Toodie SueAnn Boll, Jon Edwards, Alyssa Rempel, Pam Service and Jennifer Trustem.

Scenic design is by Calder Johnson, costumes by Caroline Allendar, lighting by David Tyndall. Oedipus the King and Women in Congress (each about an hour long) play weekends at NCRT through February 15.

Plays written closer to our time can also induce us to examine ourselves and our society. Along with an original musical version of Pygmalion (directed by Gretha Omey), juniors and seniors at Northcoast Preparatory and Performing Arts Academy wanted to do Spring's Awakening, a play by Frank Wedekind that has been controversial for a century but has also been adapted for film, television and the musical stage.

With the most graphic scenes softened or eliminated, the version they performed last weekend in Gist Hall Theatre emphasized universal adolescent experience within a repressive 19th century German context: equally awakening bodies and minds, keenly felt pressures and alien impulses in the onrush of adulthood, amidst elusive golden woodland days and brilliant nights. Yet for today's audience, the play may organize itself around the topic of teen suicide.

Director Jean Bazemore and designer Jerry Beck have developed poetic stagecraft that imbued the evening with efficient beauty. The play ended with unexpectedly powerful emotion. The acting company conveyed both the characters and their own commitment. They were Jesse Mackinney, Lily Drabkin, Nico Krell, Ellen Thompson, Chris McIltraith, Annajane Murphy, Danny Davis, Ethan Frank and Myel Gilkerson. An extra word must be said about Nico Krell, whose performance and stage presence were more assured and compelling than that of any young actor I can recall.

The Arcata Playhouse Family Fun series gets off to an early start with Scotland's award-winning Puppet State Theatre Company performing The Man Who Planted Trees on Friday, Jan. 31 at 7 p.m. and Saturday, Feb. 1 at 1 p.m. and 7 p.m. The play employs comedy and puppetry to tell a tale based on Jean Gioni's classic novel about a man and his dog who transform a barren wasteland by planting a forest. 822-1575, arcataplayhouse.org.

Dell'Arte School first years present Charivari!, a bawdy and boisterous commedia dell'arte show on Thursday, Feb. 6 through Saturday, Feb. 8 at 8 p.m. in the Carlo Theatre. May not be suitable for children. 668-5663, www.dellarte.com.