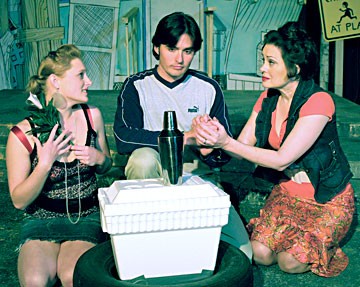 With great playwrights and great plays comes great responsibility. All's Well That Ends Well may not be Shakespeare's greatest comedy, but it is at least as great as some of his plays that are performed more often. It's full of ideas and ironies (which may well include the title).

The story is rooted in ancient fable. Helena is the orphaned daughter of the deceased physician to the late Count of Rosillion in France. She was taken in by the Countess and lives alongside the Countess' son, Bertram. As the play begins, Helena is helplessly in love with Bertram, and when he goes to the King's court, she follows. She uses one of her father's remedies to cure the King of an ailment. In gratitude, the King allows her to pick a husband from among his courtiers, she chooses Bertram and they marry.

Bertram refuses to consummate the marriage and goes off to war (accompanied by Parolles, a scamp and center of subplots), telling Helena in a letter that he won't be her husband until she takes the ring from his finger and has a child by him. While at war in Italy, Bertram arranges to bed a local woman but Helena substitutes herself for the assignation, and eventually fulfills Bertram's conditions, so he accepts her as his wife.

The current production at North Coast Rep is fluidly and energetically staged by director Cassandra Hesseltine, the scenic design by Daniel Nyiri is creative, and there are fine performances: for example, Gloria Montgomery as the Countess (though the character is meant to be older — George Bernard Shaw called this role Shakespeare's most beautiful for an older woman), and Carrie Hudson as her clown. Lincoln Mitchell as the King had impressive moments. A.J. Stewart has the makings of an exciting Shakespearian actor, but the showy excesses that threatened his outstanding Iago in the recent Shake the Bard "Othello" pretty much swamped his portrayal of Parolles in this play on opening night. Others, like Katie Sutter as Helena, bravely soldier through.

But it's difficult to really say much about the acting when there's more caricature than characterization. That seems part of the director's approach in setting this production in a contemporary trailer park. There's no reason why great or even pretty good plays can't be set in trailer parks. But the reasons this one doesn't work are many, and they start becoming evident very quickly.

The first test for the audience is whether the world on stage makes sense. Here we're presented with a trailer park where the manager is a king who for some reason has an army. Some of the residents apparently have servants. These and similar incongruities are a lot to swallow, or to understand in terms of the crucial relationships, which meanwhile go flying obscurely by.

In her program notes, the director writes that the play is about honor. This is a view shared with W.H. Auden, who explains in one of his famous lectures how the concept is worked out within the class and status system in the play. Class and power relationships are important in Shakespeare, and they are crucial in this play. But the popular notion of the trailer park is that it harbors one class. Maybe that's the director's joke, but instead of illuminating those relationships, this setting muddles them to the point of incoherence.

Instead of relationships we get interacting caricatures, especially of the central characters: a love-struck girl with a crush on a moronic jock. Those characters never seem more dimensional than that, and if you're wondering how Shakespeare could hang an entire play on it: He didn't. Theatergoers have argued over the enigma of Helena, and Bertram's true nature, for centuries.

One sign of a badly imposed concept is how much it works against Shakespeare's words rather than with them. At times in this production there are heroic attempts to use the language, but mostly it's a losing fight. Soon the desperation to escape from the lines and the play within them leads to one cheap trick after another — from cell phone photography to simulated vomiting.

In our time, there've been sincere attempts to re-invigorate familiar Shakespeare plays by changing or mixing milieus and time periods. Some have succeeded, and the best have provided new insights and interpretations as well as being highly entertaining. Others have been honorable failures.

But relocating Shakespeare's plays to ever more bizarre times and places has also become a virulent fad. In some hands, it expresses mostly the feverish need to reduce the plays to spectacle, more from a peevish impatience with their complexity than as an opportunity to explore their depths of emotion and meaning. Shakespeare has become an exploitable if resented brand name.

Giving the benefit of the doubt to this production — that it is a sincere effort — didn't improve my experience of it. For me it was more travesty than problem comedy. Even as an interpretation, it seemed to me to reduce Shakespeare to a wordy sitcom: the worst of both worlds.

People go to Shakespeare productions for various reasons. Those who go for a cute concept, costumes and clowning may enjoy this one. Personally, if I'm going to sit still for several hours, trying to maintain my concentration on all those words, I want some illumination and emotion that comes from the playwright generally regarded as the greatest who ever lived. I've enjoyed Shakespeare parodies — I've written and been in a few — but parody is parody. The play is the play. If that's what was presented at NCRT, I'm truly sorry, I didn't see it.