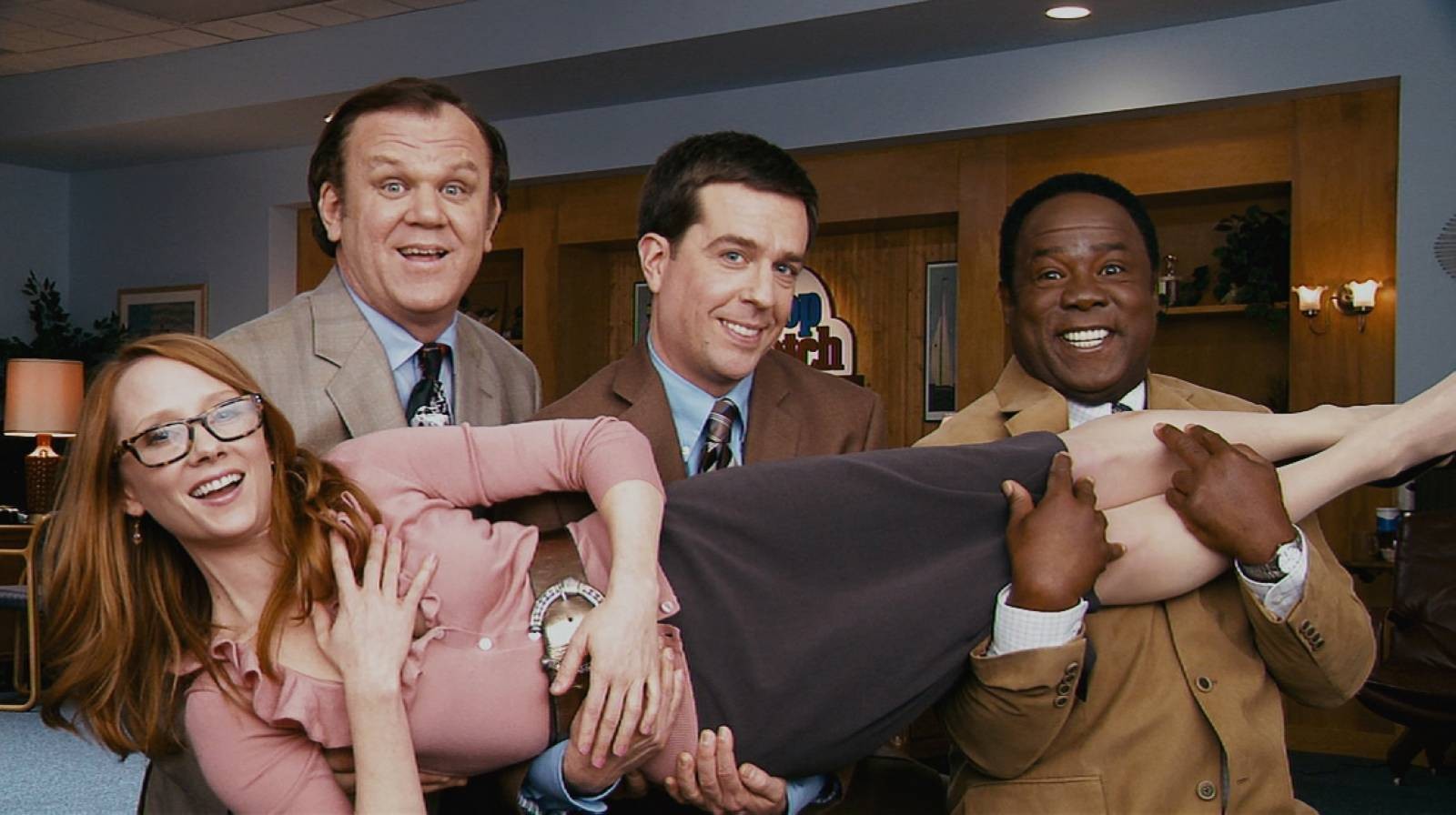 CEDAR RAPIDS. Having attended graduate school at the University of Iowa in Iowa City, I was vaguely aware that Cedar Rapids was not far away. But back then, there was no ready reason for ever going to Cedar Rapids, a moderate-sized city with no apparent distinction, at least for this out-of-state Iowa-ignorant graduate theater major who was attending school in the "Athens of the Midwest."

Subsequently, my closest friend at the university got a job teaching at a community college in Cedar Rapids so I did actually visit there a few times, but I confess to having no memory whatsoever of the place. No matter. As it turns out, the film was actually shot in Ann Arbor because of a tax break provided by Michigan not available in Iowa so I wouldn't have recognized anything anyway.

Like my old image of the city, Cedar Rapids is a pleasantly entertaining comedy without any real distinction. Even as I was enjoying the film I realized that in six months it would barely register. But I am happy to take my pleasure where I can.

The story centers on Tim Lippe (Ed Helms, The Office; The Hangover), an idealistic insurance agent who learns a few of the facts of life when he is sent to a conference in Cedar Rapids, which may give you an idea of how sheltered he was before in Wisconsin. Tim actually believes that insurance agents are a force for good, but when he meets his fellow agents at the conference, he discovers that his views are not widely shared. You might have thought that his unpleasant boss Bill (Stephen Root) or his paramour Macy (a wonderful Sigourney Weaver), who also was his seventh grade teacher, might have wised him up.

As it turns out, though, his education comes from the help of three conferees who guide him through the turmoil and cynicism of the "real" world: his black roommate Ronald (Isiah Whitlock, Jr), outwardly crass salesman Dean (John C. Reilly) and, particularly, straying married saleswoman Joan (an excellent Anne Heche who embodies her character to perfection).

There are no great revelations here, just a solid film expertly helmed by Miguel Arteta (The Good Girl). And, for a change, the ending is an entirely appropriate and satisfying comic resolution. Rated R for language, drugs and a little sex. 87m. At the Broadway.

SUCKER PUNCH. The tagline for Zack Snyder's latest reads: "You will be unprepared." Which is true, but not for the intended reasons. I think we should ostensibly be surprised by the larger-than-life action sequences and the epic battle of good v. evil and the twist at the end. Instead, I was unprepared to be so profoundly bored by a movie that contains, among many things, a long sequence in which a team of 20-something ingénue commandoes in garter belts and thigh-highs, bristling with modern weaponry, blow away approximately a thousand steam-powered German soldiers in World War I trench warfare, then fly off on a giant rocket-powered battle-bot.

In the retelling, moments like this sound breathtaking and exuberantly fun, but something about their execution in this form sucks out the life. What should be thrilling becomes yet another exercise in "how many effects can be crammed into any given frame?"

If you've seen the trailer you know the skeleton of the story: Following her mother's death, a young girl (Emily Browning) is wrongfully confined to an insane asylum by her tyrannical stepfather -- a very sinister, vaguely gothic asylum presided over by leering orderlies and the improbably kindhearted, Eastern-European lead psychiatrist Dr. Vera Gorski (Carla Gugino).

Or is she? She may actually be the newest addition to a burlesque company/whorehouse, where her dancing prowess makes her a standout and serves as smokescreen for her escape plan even as it arouses the suspicions of the thin-mustachioed Latin pimp running the show (Oscar Isaac).

I won't give away the ending; the movie will do that for you, if you make it to the end. But I will say that by the time I got there, I was confused about what I had seen.

Sucker Punch tries to be a period drama, escape thriller, girl-power actioner, samurai myth, Western, war epic, swords-and-sorcery, science-fiction, and/or steam punk. But it is not quite any of those things. It is striking to look at, almost overly so, and well-enough acted by its very attractive cast. And oh yeah, it's about the triumph of the human spirit, I guess. 120m. Rated PG-13 for thematic material involving sexuality, violence and combat sequences, and for language. At the Broadway, Fortuna, the Minor and Mill Creek.

SOURCE CODE. If you've been to the movies in the last few months you've seen the trailer and know the premise: Jake Gyllenhaal is Captain Colter Stevens, a soldier who, through the "Source Code" program, wakes up on a train in the body of a man who will die in 8 minutes from a terrorist bomb -- again and again and again. Think of it as Groundhog Day gone high-tech thriller. Oh yeah, there's a girl involved (Michelle Monaghan). 94m. Rated PG-13 for some violence including disturbing images, and for language. Opening Friday at the Broadway, Mill Creek, the Minor and the Fortuna.

HOP. Easter-themed CGI/live action kid-flick from Tim Hill (Alvin and the Chipmunks) with E.B. (voiced by Russell Brand, Get Him to the Greek), a teen Easter Bunny Jr. escaped from Easter Island to Hollywood, where he wants to become a drummer. After he makes himself a bad houseguest for slacker dude Fred (James Marsden) the two must work together to save Easter from evil Easter chicks. 90m. Rated PG for some mild rude humor. Opening Friday at the Broadway, Mill Creek and the Fortuna.

INSIDIOUS. Supernatural horror from director James Wan (Saw) with Patrick Wilson and Rose Byrne as Josh and Rose, parents of a haunted comatose boy (Ty Simpkins) who is a magnet for evil forces from some creepy place called The Further. 98m. Rated PG-13 for thematic material, violence, terror and frightening images, and brief strong language. Opening Friday at the Broadway and Mill Creek.

Gregg Moore and Bandette are back supplying Moore's live soundtrack for THE GENERAL, Buster Keaton's classic silent comedy about stealing a train during the Civil War. Perfect for Friday, April Fool's Day; showtime is 8 p.m. in Dell'Arte Carlo Theatre out in Blue Lake.

This month's Surfrider/Baykeeper/Ocean Conservancy Ocean Night on Friday at Arcata Theatre Lounge is tsunami-related with proceeds going to Surfrider Japan and to the Redwood Regional Rotary Relief Super Fund to help rebuild Crescent City Harbor. The movies? DRIVE THRU JAPAN is part of a Drive Thru series following top surfers on road trips (other episodes take them to Europe, Australia, South Africa and Central America). They drink sake and eat sushi between waves, but mostly they're surfin'. THE BAJA WAVE DOCUMENT looks at an unlikely alliance between surfers and fishermen battling Mexican developers to save cherished surf spots and fishing grounds.

Saturday the ATL has the Stanley Kubrick classic dark comedy DR. STRANGELOVE OR: HOW I LEARNED TO STOP WORRYING AND LOVE THE BOMB starring Peter Sellers (in three roles including the mad Dr. Strangelove) in a failsafe tale involving a crazy American General (Sterling Hayden) who starts a nuclear war because he's worried about Communists who want to fluoridate our water "to sap and impurify all of our precious bodily fluids."

THE ADJUSTMENT BUREAU. An ambitious politician falls for a ballet dancer but mysterious forces scheme to keep the two apart. Rated PG-13. At the Broadway.

BATTLE OF LOS ANGELES. The aliens would have invaded here, but the weather in SoCal is too nice to pass up. Rated PG-13. 116m. At the Broadway.

THE KING’S SPEECH. Based on the true story of the Queen of England’s dad and his remarkable friendship with a maverick Australian speech therapist. Rated R. 119m. At the Broadway.

LIMITLESS. If you take revolutionary pharmaceuticals to combat your writer's block, beware the consquences. Rated PG-13. 106m. At the Broadway, the Minor, Fortuna and Mill Creek.

THE LINCOLN LAWYER. Matthew McConaughey plays a lawyer. He drives a Lincoln. There you go. Rated 119m. At the Broadway and Mill Creek.

RANGO. What chameleon doesn’t dream of becoming a swashbuckling hero? Rated PG. 107m. At the Broadway, Fortuna and Mill Creek.