Along the Historic Yurok Loop

Photo by Barry Evans A view of Hidden Beach from the trail. 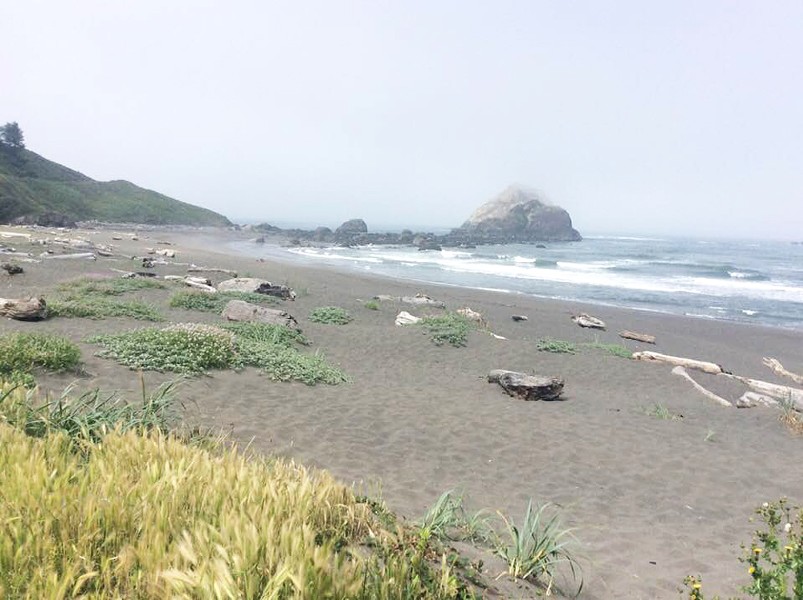 Photo by Louisa Rogers These isolated rocks were once a grocery store for the Yurok.

No matter how many times I walk along the Yurok Loop, I never tire of it. Whether sunlight dapples the forest path or the leaves glisten from mist, it makes no difference; just seeing the little wooden bridge at the start of the trail makes my heart leap.

The Yurok Loop is a 1 ¼-mile trail next to the Lagoon Creek Picnic Area, off U.S. Highway 101, just past the Trees of Mystery, 68 miles north of Eureka.

A couple of times a year, my husband, Barry, and I travel north in our camper van to explore Del Norte and sometimes Curry County, the southwestern corner of Oregon. We almost always linger for a while next to the ocean, just past Lagoon Creek.

You can access the Yurok Loop from Lagoon Creek or from the beach. Today, I'm starting from the picnic area. Soon after the bridge, I have a choice of going left or right (it is a loop!) I always take the left trail, under second-growth firs and alders. Atfirst I hear the distant thrum of highway traffic, but within minutes it fades, and the only sound is my breath and an occasional twig snapping. The winding trail climbs gently until after about 15 minutes, when it reaches the junction with the Coastal Trail, and I turn left towards driftwood-strewn Hidden Beach.

I glimpse the Pacific again and in about 12 minutes, I reach the trail down to Hidden Beach. Sometimes I descend to perch on rocks, clamber over logs, or hunt for agates; other times I stay high up, like today. Once I hiked the entire 4 miles of the Coastal Trail from the start of the Yurok Loop to the Klamath Overlook, where Barry was waiting with our van to pick me up.

On my way back, I admire the cluster of rocks out in the ocean. They look isolated and remote, but, according to Jerry and Gisela Rohde's Best Short Hikes in Redwood National and State Parks, they were not remote to many pre-settler Yurok, who would have visited them in their canoes. "The rocks served as a sort of neighborhood grocery store, stocked with such delicacies as seals, sea lions, and various edible plants," they write.

The path descends and I walk along, looking at the offshore rocks and trying to imagine what a sea lion tastes like. I pass an area that juts out, where an erstwhile bench once offered a perfect perch for admiring the view. A year ago, Barry and I were so inspired after one of our walks along the loop that we wrote Save the Redwoods League, the nonprofit that handles benches within state parks, offering to put up a memorial bench at this viewpoint. Unfortunately, we were told, "We are unable to place benches in parks anymore per Redwood State & National Parks request."

A few minutes later, I cross the bridge and head back to the Lagoon Creek Picnic Area. While the pond doesn't offer dramatic vistas like the Yurok Loop, it's a pleasant place. It wasn't always, though. A signpost, now whited out, once had a detailed description of its history, explaining that the picnic area overlooks what was the Yurok village of Omen. Later, homesteaders arrived.

In the 1940s, Crescent Plywood built a mill here, damming the mouth of the lagoon and creating storage for logs until they could be processed. The mill, which at one time employed many Yuroks, was described by locals as an "ugly, smelly place ... with the tepee burner going constantly and producing a thick dark smoky haze which hung over the area." When the mill closed in the 1950s, Del Norte County dismantled the buildings and dam and allowed the pond to evolve back into a wetland.

In their book, the Rohdes write that the pond was once a lake known to the Yuroks as O'kwego-O-Keto. Fed by a stream, the lake continued to the ocean, ending in a lagoon at the beach. The mill, built during World War II, "fouled the water with toxic chemicals, but the damage was undetected for 50 years." According to Leonel Arguello, head of Natural Resources Management and Science in the park, the contaminants are in the mud, and getting rid of them would require draining the whole lagoon. Still, people do fish there, and water lilies bloom.

Back in our van, I watch people on the beach. A man fishes, while a mother wades in the shallows with her toddler. I squint, trying to imagine a cluster of canoes in the distance heading out to the rocks.