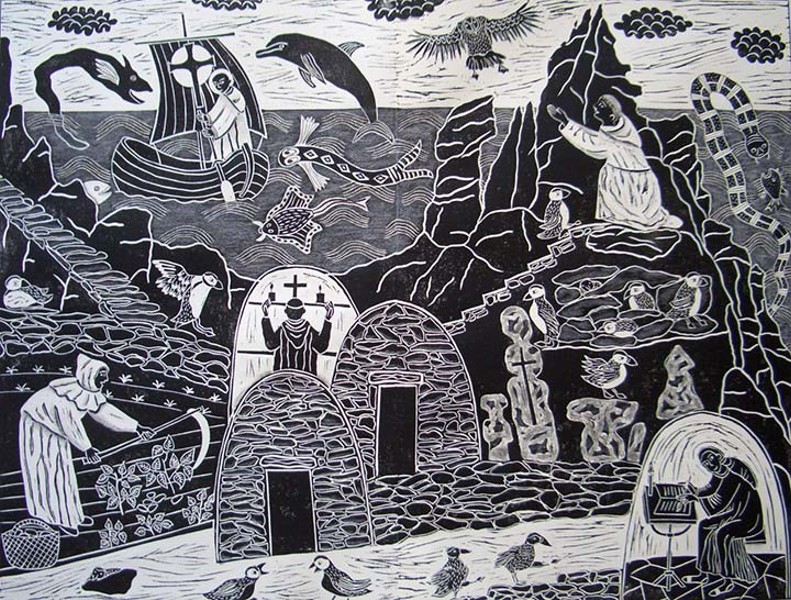 Lida Penkova Linda Penkova's "Skellig Michael: Once Upon a Time." 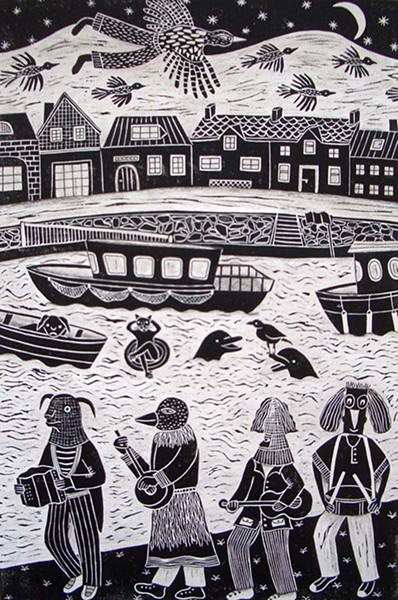 "Sometimes I feel pissed," confesses artist Lida Penkova, "because I do almost nothing else but paint, and I feel that somehow life is escaping me!" It's not so much that Penkova's life is escaping her, but that she's pouring it into her whimsical, worldly and wondrous paintings and prints. "Once you are in this fascination of creating you can't stop it!" she exclaims, her blue eyes bright beneath a tidy wave of dark hair. Every day, toiling over her latest work, she's in love with her art and art-making.

Born in Czechoslovakia, Lida Penkova was destined to wander. At an early age, she moved to England, and then to Germany. In each country she stayed for lengthy periods, soaking up the sights, the people, the colors. She's not your typical traveler, consuming cultures for a few days before moving on to the next. Penkova prefers to hang around for a while, experiencing everyday life like going to the market or chatting with a neighbor. Along the way, she attained a psychology degree and ended up in Mexico, where she stayed for 16 years.

Working as a psychotherapist in Tepoztlán, Mexico, Penkova found herself entranced by the stories surrounding her small village. She became fascinated with ancient cultures and the ways in which their legends continue to infuse our world with "the myth that still defines an echo in everyday life." Absorbing the art and spirituality surrounding her in Tepoztlán, Penkova listened to "what people tell each other, what they celebrate, what they believe in." The experiences in Mexico were foundational to her aesthetic sense and narrative sensibility. After moving to the United States, she finally decided that she needed to give her favorite stories form. She decided to become an artist.

Fourteen years later, Penkova is a self-taught painter and printmaker. Believing that anyone can be an artist, she wears her self-taught status as a badge of honor. Not weighed down by formal instruction, she doesn't feel the need to follow any rules about what to paint or how to paint. "Look at my perspectives," she exclaims, laughing. "Sometimes they are totally screwed! Who cares?" Penkova's vision drives her, and her untrained hand harmonizes with her subject matter. The unconventional structures of her images help strip away any artistic preconceptions viewers might hold, allowing them to focus on the stories first. Indeed, the unschooled nature of her works lends a kind of sincerity to the stories she paints. Like the indigenous tales she loves, no outside conventions have been imposed upon her aesthetic.

Penkova's inspiration comes from her extensive trove of travel memories. An experience will stand out to her, and when she finds an interesting story she learns as much about it as she can. She examines the visual possibilities of the tale, imagining the look of important characters, the expressions on their faces and the spatial relationships. "Then I just go and paint them and see what happens," she says with an infectious giggle. Although Penkova is honoring the original narrative that inspired her, she's not interested in an exact representation of the story. These are her impressions of the events — her interpretations of how they might look. For her, "It's a mixture of fantasy and physical reality."

For example, during a recent trip to Ireland she was captivated by the interplay between modern religion and the lingering elements of paganism. One linocut print, "The Wren Boys of Dingle," depicts a parade of curious creatures merrily ambling along with musical instruments and funny costumes. A bird with human legs soars over quaint cottages while dolphins and a reclining, floating cat observe, bobbing around in wavy black and white streaks of water. It's the kind of image that makes you smile as you conjure up an explanation of what it means. As with many of Penkova's linocuts, the readily identifiable graphic elements and strong, contrasting lines provide a comforting balance to the mysterious subject matter.

Another Irish-inspired print, "Skellig Michael: Once Upon A Time," is an example of Penkova's deftness with narrative complexity. It's a busy image, filled with layers of meaning. Monks are paddling, praying, and plowing, surrounded by mythical creatures and craggy peaks. A few animals reveal the permeable boundaries of her influences. The flat, dappled appearances of a manta ray, flying fish and snake have direct references to the Australian aboriginal art Penkova previously studied. To boil down such complex stories into the confines of a single image requires someone who is truly paying attention.

"I feel like I'm the source of something mysterious when I do art," says Penkova, "I just can't give it up." Those thrilling instants when a piece is finally finished are her favorite moments. She says she feels free from the demands of her creative impulses, but her husband laughs knowingly. "In a few hours you'll be back to starting a new one," he tells her.

To see some of her latest paintings and prints, be sure to visit the Upstairs Gallery in Arcata during the month of August. An Arts! Arcata reception will be held Aug. 9 from 6 to 9 p.m.