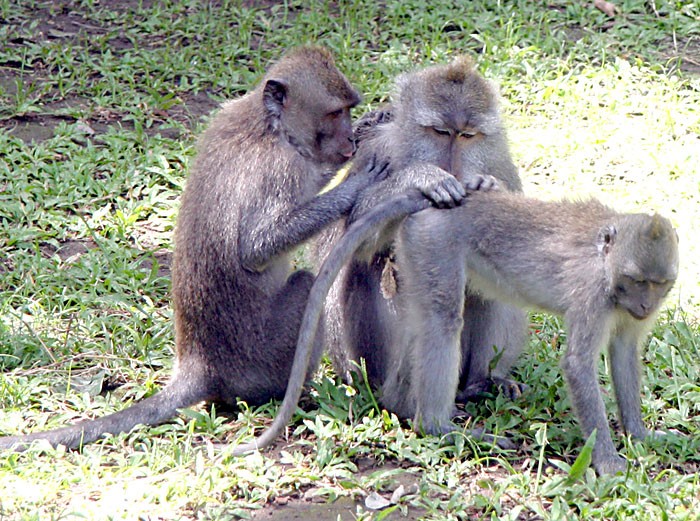 I'm an easy mark. If someone in the Plaza wants a dollar for a cup of coffee, I instinctively pull out my wallet, even though I'm pretty sure that coffee isn't my petitioner's beverage of choice. Seems that altruism -- concern for others without the expectation of a reciprocal pay-off -- is quietly at work in my brain.

When anti-evolutionists attack the notion of natural selection (the process whereby organisms best adapted to their environment are favored to transmit their genes to succeeding generations), they frequently invoke the Altruism Argument. By definition, altruistic acts exact a cost to the benefactor, meaning that "selfish" genes should out-compete "altruistic" genes. Therefore it must take a force acting outside of natural selection -- God? -- to make us act against our own best interests.

Evolutionary psychology offers several responses, none of which require divine intervention. One is kin selection. Our brains were evolving when our ancestors hunted and gathered in groups of perhaps 50 to 100 people, and when fellow travelers tended to be blood relatives. Evolution would have favored a gene for being kind to one's kin when the net gain to the group exceeded the loss suffered by the "good guy."

A second response is reciprocal altruism. Picking the nits out of someone else's hair costs you in the short run (that time might be better spent cooking or feeding yourself), but you'll benefit later when the nit-picking is reciprocated. Like washing your hands, both parties are better off from the exchange of favors.

Beyond kin selection and reciprocal altruism, it's easy to see other reasons why generous genes might sometimes out-compete selfish genes. For instance, a man with a reputation for being kind attracts mates -- if you're a fertile woman, you want the father of your children to be generous. Also, natural selection should favor behavior that allows us to get along with others -- if you have reputation for generosity, you're less likely to be challenged to a potentially lethal fight than, say, an alpha male is.

It's humbling to realize so much of our behavior is ruled, out of sight and mind, by our genetic makeup. Much as I'd like to think of myself as a fine, generous person, I know it's really my genes that hand over the money. They just don't understand that you can't get a good cuppa joe for a buck these days.

Barry Evans' (barryevans9@yahoo.com) genes make him a softie in Old Town Eureka, where he lives.