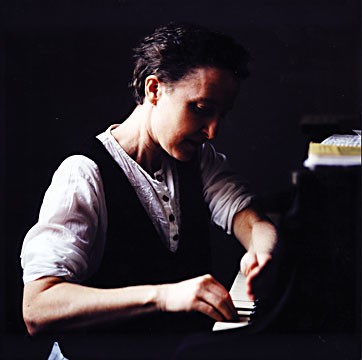 Unless you're up to date on the world of contemporary jazz, the names Myra Melford and Marty Ehrilch may not mean much to you. New Yorker magazine included the duo's 2007 release, Spark!, on a short list of the best of the year. Pianist Melford has also earned acclaim for her work with Trio M, where she works with bassist Mark Dresser and drummer Matt Wilson. Saturday, Jan. 26, the always forward thinking Redwood Jazz Alliance brings both the duo and the trio to Arcata for a show at Fulkerson Recital Hall that will also include a combination of the two, an unnamed quartet with all four M's.

Melford called from her Berkeley home to talk about the show, about jazz in general, and the "progressive jazz" she plays. I asked what she thought about the New Yorker review where the music she made with clarinet/saxophone player Ehrilch was described as "thorny."

"I think of it as quite melodic actually," she said with just a hint of defensiveness. "We use a lot of melodies and harmonic chord progressions and different kinds of grooves. It's not like traditional straight-ahead jazz, by any means. But it's using song form a lot. We base our improvisations off of songs that Marty and I each write. And since we have both been influenced by a lot of the more experimental music of the '60s and beyond, our improvisational vocabulary includes that kind of thing the New Yorker refers to as 'thorny,' those kinds of textures or whatever. But I would say it's just that there's a lot of exuberance in the music, a lot of energy. That's how I think about it."

As Melford noted, the starting point for a new kind of jazz was innovative '60s improvisers like Henry Threadgill, the Art Ensemble of Chicago and the Association for the Advancement of Creative Musicians. I wondered, where is jazz going now? "It's always going somewhere," she answered. "It's hard to say where. For me? Well, I don't know. I think I'm on this path where I'm always looking for new sounds — that may mean new instruments or new combinations of instruments, new approaches or strategies for improvisation."

(For more of the conversation with Melford check the North Coast Journal Blogthing at ncjournal.wordpress.com.)

Thursday at Humboldt Brews, catch Del Mar, featuring drummer Bud Gaugh of Sublime fame. Note: The seaside name Del Mar reflects the band's oceanic Dick Dale-style surf sound, not their home base. They're touring out of Reno, this time out on the road with Sacto-based power rock trio SexRat.

Add this to the you-learn-something-new-every-day file. I was at a loss translating the acronym in the p.r. (press release) from HFRA (Humboldt Free Radio Alliance) for a Friday night Alibi show describing Trigger Renegade's music as "NWOBHM-inspired rock." Wikipedia informs me that NWOBHM stands for New Wave of British Heavy Metal, a sound that emerged in the late '70s in the U.K. "as a reaction in part to the decline of early heavy metal bands such as Deep Purple and Black Sabbath. The NWOBHM toned down the blues influences of earlier acts, upped the tempo, and adopted a tougher sound, taking a more hardcore approach." The Alibi show also includes The Zygoats playing some sort of post-NWOBHM music.

If you've been to The Works lately you might have seen the petition demanding a reunion of The Hitch, a beloved local metal quartet who have been on a long hiatus. Those who can't wait may want to hit the show at the Alibi Saturday with Machete and Side Iron since each band includes a former Hitch member.

There's definitely a metallic taste in the music of Oakland-based Tempest, who typically describe themselves as a Celtic band. Watch Norwegian front man Lief Sorbye launch into a shredding solo on his double-necked electric mando Saturday at Blue Lake Casino and you'll know his roots are in rock.

Blue Lake groove rockers Kulica are getting back into the gigging swing. Friday at Red Fox Tavern they share the bill with youngsters Steel Toed Slippers, who are gearing up for a big show in February marking their first CD release. More on that later.

Friday at Six Rivers: Hellbound Glory, a band out of Aberdeen, Wash. via Reno, playing a sort of neo-outlaw country they call "scumbag country," with songs about drinking, drugs, hard livin' ("like a head-on collision") and general rowdiness. As they brag on their MySpace, they are "officially banned from [Reno bar] Shea's Tavern for kickin' over pitchers and raisin' a ruckus."

Also on Friday, a return visit to Calvary Lutheran in Eureka by the young San Francisco Opera Center Singers as part of the ongoing Eureka Chamber Music Series.

More singing Friday at the Jambalaya as assorted rockers go acoustic, getting all introspective and singer/songwritery. Well, maybe. Clay Smith from the dear departed Rubberneckers, Bret Bailey from Que La and Common Vice, Brett "the Truck" Schuler from Henpecker and Pete Ciotti from The Nucleus all have a few songs to sing. We'll see how acoustic they keep it.

The just-mentioned Pete celebrates his 30th birthday Saturday doing what he loves to do, playing drums with The Nucleus. His b-day party at Humboldt Brews also includes a set by gypsy-jammers Absynth Quintet. Earlier in the evening, Ryan Roberts from Absynth will be at Libation with that other gypsy jazz combo, the Tom Toohey Trio. And the night before (Friday), members of both those bands play with the fiddlin' Rob and Joli of Cuckoo's Nest for the Westhaven Center's annual "Django Swing Concert" celebrating Django Reinhardt's birthday.

It's blues time Saturday at the Jam with "string-twanging" guitarist Catfish Keith, a man who loves his National Reso-Phonic guitars (he's an official dealer) and plays them with relish.

Monday is not typically a big night for music, but this coming Monday, Jan. 28, brings a couple of touring acts to town. At the Jambalaya you have Woven, an ambient electronic rock outfit from L.A. who put out a couple of discs for Interscope. They share the bill with Deric Mendes' band, Tanuki. As Deric explains, the band name was chosen because the mythical Japanese creature called the tanuki had shapeshifting abilities. From the beginning, that was the plan for the band. "We originally started with acoustic guitar and cello," said Deric, "but we're getting to be more of a rock band. I've gone to electric and added more distortion. Now it's more a Brain Eno-inspired rock band."

And a last minute addition to the Red Fox calendar brings Def Jux rapper Mr. Lif back to town for a Monday night show also including DJ Choc-Won, J the Sarge and others, for an evening of "industrial polka sprinkled with a wee bit o' bagpipe," according to the promoter, who adds, "it's really hip-hop in case you didn't know."

Did you miss seeing Clinton at Redwood Acres? Tickets for the Feb. 8, Mateel visit by the other Clinton, Funkadelic's (George) Clinton, are about half gone. Get 'em while you can.

Benjy and Heather Wertheimer, aka Shantala, come to Arcata's Community Yoga Center Tuesday, Jan. 29, for an evening of the sacred Indian call and response chanting known as Kirtan. As Benjy explains, Kirtan is a yoga practice. "Most people think of yoga as postures or breathing, but there are so many other kinds, including the Indian classical tradition that I come from, Nada Yoga, the yoga of sound and vibration. Nada Yoga finds a beautiful meeting ground with Bhakti Yoga, which is the yoga of pure love and devotion, in the Kirtan. The focus is on becoming aware of our essence and opening the heart."

Speaking of open hearts, my favorite folkrockers, Joanne Rand and the Rhythm of the Open Hearts, play Friday at Mosgo's. Ali Nelson opens.

Reggae? You got it Tuesday at the Red Fox with D.C.-based SoJa mixing in a bit of dub. Humboldt's own Jah Sun opens.

Reggae clash? You've got that, too. A note from Dimmick Ranch indicates that the efforts to settle the Mateel v. People Productions/Dimmick Ranchlegal dispute out of court have failed. (See reggaeblog.wordpress.com for details.) That means the two sides will lay out their respective cases before an arbitration judge starting Monday, Jan. 28, at 9 a.m. at the Red Lion in Eureka. Proceedings are open to the public.

Reggae Rising is planned for the first weekend in August, same as last year, and the same as Reggae on the River before it. According to Mateel board member Garth Epling, the main sticking point in negotiations regarding the lease for Dimmick Ranch was the fact that "the Mateel wants to preserve its ability to put on a local festival using the Reggae on the River name." As a result of the negotiation breakdown, the warring parties seem to be opting for what the Mateel's lawyer, Bill Bragg, describes as "the nuclear option." Well, I guess that's one way to achieve peace.