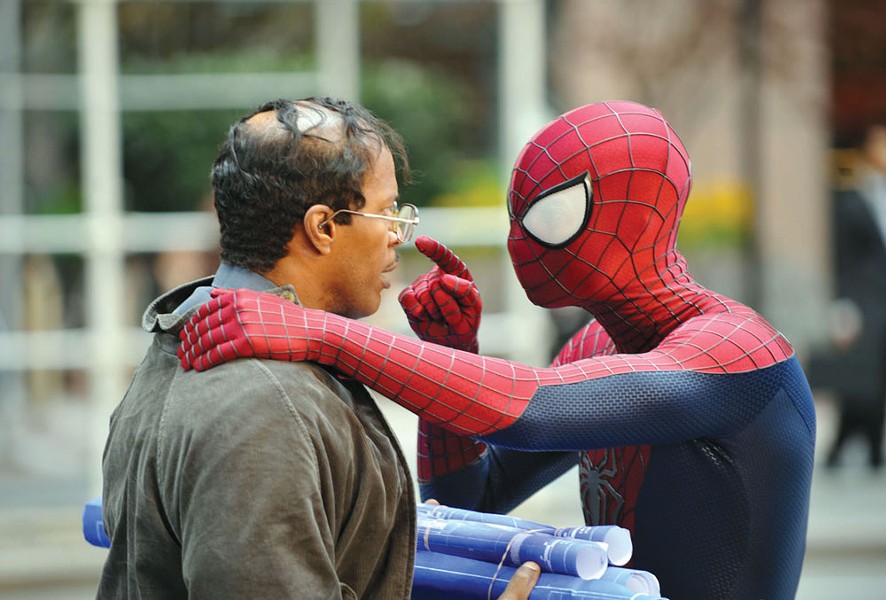 AMAZING SPIDER-MAN 2. Disney bought the movie rights to Marvel in 2009 for $4 billion, and it's been laughing from atop its pile of profits ever since. Let Mickey gloat; he deserves it. The reboots have yet to disappoint, putting all previous attempts to shame with better writing, directing, casting and marketing. The studio has handled crossovers with finesse and left Warner Bros. whimpering and clutching Batman as its only hope. Well played, Disney. Well played.

The Amazing Spider-Man 2 is proof that Disney is not losing momentum, despite what the laws of physics might dictate. Marc Webb should make himself comfortable in his director's chair because he's likely not going anywhere else anytime soon. His Spider-Man doesn't just win in comparison to the Sam Raimi series; it holds its own as a thoroughly entertaining and well-executed addition to the superhero canon. If it were 25 minutes shorter, I'd be tempted to put the phrase "perfection" on the table. Even with the long runtime and the consumption of a large, cherry ICEE, the action spectacle won out over bladder limitations.

It starts with a flashback, shedding more light on the original's exposition and fueling the new plot. It's a sad reminder of Spidey's origin story, but it's also a convenient bit of foreshadowing and insight into Peter Parker's current struggle: reconciling abandonment by his parents while also trying not to abandon the people he loves. You can't have a tragic hero with the tragic, after all. This serious edge appears sporadically throughout the film, but the writers balance it with campiness and Spidey acrobatics whenever they get a chance.

Spidey faces a myriad of villains in this sequel, each requiring his own backstory. Hence the film's 2-hour-plus runtime. Jamie Foxx's Max Dillon is a hot mess of angry nerd turned villain. Max's rebirth as Electro is clearly the best result of high-powered electrocution anyone could ever ask for. Sure he died without dignity, in a tank full of electric eels, but now he's a Teslian Midas: Everything he touches turns to sparks. Not only can he harness electricity, but he can also levitate and travel through the electric grid. He's like Wes Craven's Shocker, sans late '80s special effects. He's angry, misunderstood and an electric superconductor, so he's a perfect villain. And after hearing the words, "I'm Dr. Kafka; I'm here to help you," can you really blame him for rebelling? Cue electrical experiments montage. Zap! Sizzle! Pow!

There is, of course, the dark and scorned rich boy, Harry Osborn, aka the Green Goblin (Dane DeHaan), who's going to die from the same disease that killed his father unless he can cure himself with Spider-Man's blood. Then, there's Paul Giamatti's Aleksei Sytsevich, aka the Rhino. His backstory is nearly nonexistent, and if you don't look closely you might not even realize that it's Giamatti. His main purpose seems to be adding action to the intro and outro; obviously, he pulls this off perfectly.

The great thing about the Spider-Man comics is that the hero and his villains all rise from the ashes of their scientific nerdery. In a battle between Science vs. Evil Science, science wins either way. Tobey Maguire's nerdiness overwhelmed his smart-assery and the result was something more pathetic than heroic. Andrew Garfield pulls off Parker's nerdy sassiness, wearing it on his web-slinging sleeve, mocking minor bad-guys throughout the film. His eyes are less puppy-dogged than Maguire's, but his romantic conundrum with Gwen Stacy (Emma Stone) is so much more watchable than Maguire's awkward relationship with Mary Jane (Kirsten Dunst). This could be because Garfield and Stone are both so damned attractive, but it's more likely that Parker and Stacy have a more alluring backstory. Parker feels responsible for the death of Stacy's father and his guilt overwhelms his love. With comic book movies, the love story has to be wrought with grief, drama and forbidden longing. Check, check and double-check.

The action, acting and direction are all fortified with great cinematography. The freeze-frame shots of action sequences bring the film back to its comic roots, at least visually. It's not over-used and it breaks the tension created by the constant explosions and flying debris. The fights with Electro are particularly good — after all the movies from the franchise, they're something refreshingly new. PG13. 143m.

FADING GIGOLO. John Turturro's romantic comedy in which women who look like Sofia Vergara and Sharon Stone pay to sleep with a man who looks like John Turturro and ask Woody Allen for sex advice. R. 98m.

CAPTAIN AMERICA: THE WINTER SOLDIER. The Avenger next door goes BAMF, this time battling the robo-armed Winter Soldier in a sequel that tops the first installment. PG13. 136m.

GOD'S NOT DEAD. A devout college student debates his philosophy classmates and professor to prove God exists. It's harder to convince us that Kevin Sorbo is a professor. PG. 113m.

HEAVEN IS FOR REAL. Greg Kinnear plays the father of a boy who claims to have visited heaven in this safe and toothless family drama. PG. 99m.

THE OTHER WOMAN. Cameron Diaz, Leslie Mann and Kate Upton are women done wrong by a clichéd plot and a thrown-together script. PG13. 109m.

THE QUIET ONES. A professor (Jared Harris) and his students decide the best place to experiment with curing a haunted young woman is a creepy country estate. PG13. 98m.

RIO 2. Endangered macaws Blu and Jewel are back for franchise cash — ahem — and to find long-lost family in the Amazon. It's a mess, but a colorful one the kids seem to like. G. 101m.