An Abe for the Ages 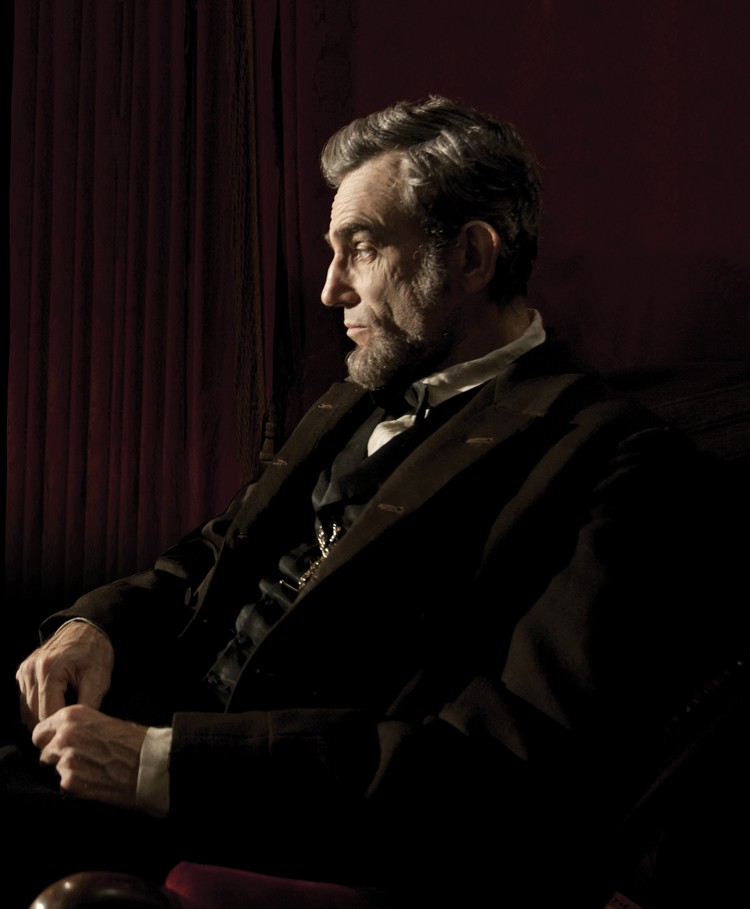 LINCOLN. For Steven Spielberg, history is all about the details. Everyone knows the general textbook versions of the Holocaust, World War II and the American slave trade, but with films such as Schindler's List, Saving Private Ryan and Amistad, Spielberg conjures the humanity and emotion behind history through details.

Here he's done it again. From the exact replica of Abraham Lincoln's office to Daniel Day-Lewis' perfect intonation of his wit, every aspect of this historical drama is carefully honed to please the most fastidious of history buffs (myself included).

Lincoln takes the idea of exacting detail to heart, focusing on one period of our 16th president's life. This is not a film about his log cabin years, his debates with Stephen A. Douglas or his assassination. It's about Lincoln's Herculean struggle to pass the 13th amendment and bring an end to the Civil War, in that precise order. With painstaking attention paid to the detailed sequence of Lincoln's signature political achievement, this struggle makes up the entire plot of the 2½ hour movie. And every second is tear-swellingly riveting.

Day-Lewis (There Will Be Blood) simply is Abraham Lincoln. Ample makeup and CGI (I'm assuming) transform his visage, but he would have been convincing in a Nixon mask. With his hunched posture, stiffly awkward gait and contemplative cadence, he embodies Lincoln perfectly.

No doubt Day-Lewis drew inspiration from Doris Kearns Goodwin's Team of Rivals. The historical tome, which provided the basis for the screenplay by Tony Kushner (Munich), is loaded with nerdy trivia and profound insight into previously unknown details of Lincoln's life during the beginning of his second term. But the book's precision and minutiae cannot get all of the credit for Day-Lewis' performance; simply put, the man is a chameleon with another Oscar nod on the way.

His isn't the only spark of brilliance. The huge cast is spotted with familiar faces, but some stand above the others. Sally Field, who I insisted was too old for the part of Mary Todd Lincoln, made me eat my words. With every bipolar, castigating utterance perfectly hewn, Field dominates her scenes with Day-Lewis -- not an easy task. Tommy Lee Jones delivers another notable performance as Thaddeus Stevens. A key player in the political tiptoeing required to pass the 13th, Stevens had a tongue that could rip foes into tiny, reconstruction-era pieces, and Jones executes these polysyllabic, embittered rants with a gusto generally reserved for a "pistols at dawn" situation.

There's not enough space here to give all the credit due to each actor, but special mention of James Spader is required: Why has this guy been missing from the big screen for so long? He's brilliant.

You don't need to be an avid history nerd to enjoy Lincoln; no matter what, you will walk away amazed at the things you didn't know, and with an undying love for Daniel Day-Lewis. PG13. 149m.

THE SESSIONS. Don't stare, it's rude. Mine was not the only childhood tainted with this societal view of the disabled, of the different. For a child it means, "Don't be curious." For an adult it means, "Try not to think about it." Under the guise of decorum, we are taught to look away from things we don't understand. The Sessions tears these ideas of acceptable behavior apart, leaving them naked and quivering on the ground.

The Sessions, the first directorial work of Ben Lewin (Paperback Romance) in over a decade, is the true account of poet and journalist Mark O'Brien (John Hawkes) and his experience with a sex therapist in the late 1980s. Confined to a gurney and iron lung after a childhood battle with polio, O' Brien deals with more difficulty in a single minute than I do in weeks, months, years -- ever. He's not paralyzed; he feels everything but does not have the ability to move anything below his neck. Despite the enormous potential for absolute depression, O'Brien refuses to let his situation take away what makes him human: his capacity to love and to be loved.

As the film's narrator and lead, John Hawkes (Winter's Bone, Lincoln) floored me, moving his name further up the list of people bound for greatness. The role demands that he convey every emotion with only his face and his voice; he commands your attention while also making it difficult to look at him. It's masterfully awkward, putting the audience directly in tune with the theme: The only person you are helping by looking away is yourself; keep looking until you see past the disability.

The sexuality of The Sessions is nakedly blunt and direct, literally. Any discomfort this causes the audience is trumped by O'Brien's distress. He is balancing his Catholicism with his human need for love and leaning on his dry wit for reassurance. His therapist, Cheryl (Helen Hunt), and his priest, Father Brendan (William H. Macy), guide him through his venture into sexuality in equally unorthodox ways.

Hunt and Macy are refreshing but in no way astounding. Hawkes steals every scene, and elicits every teardrop. But, more importantly, he's also the source of most of the laughter. It's a welcome laughter, breaking up the necessary tension. The Sessions is difficult to watch but something you need to see. R. 95m.

LIFE OF PI. Director Ang Lee (Brokeback Mountain, Sense and Sensibility) adapts the bestselling novel by Yann Martel about a young man who survives a shipwreck, only to discover that there's a Bengal tiger in his lifeboat. Gulp. PG. 127m.

RISE OF THE GUARDIANS. Santa Claus, the Easter Bunny and the Tooth Fairy walk into a bar. No, wait. I mean they team up with Jack Frost to defend the innocence (and gullibility?) of children from an evil spirit named Pitch in this computer-animated family film. PG. 97m.

RED DAWN. A movie about a communist invasion on U.S. soil sorta made sense in 1984, when Patrick Swayze and Charlie Sheen took on the Soviets. But in 2012? With Chris Hemsworth? Against the North Koreans? Hmm. Maybe there's a big shootout with Obamacare. PG13. 114m.

Shopping on Black Friday can be like dodging velociraptors, so props to the Arcata Theatre Lounge for scheduling Jurassic Park (1993) for the same day. And at just five bucks, it's way cheaper than tickets for the upcoming 3D re-release. PG13. 127m. 7 p.m. Stay with the enormous-predator-lizard theme with Sunday's screening of DreamWorks Animation's fun and clever How to Train Your Dragon (2010). PG. 98m.

THE MAN WITH THE IRON FISTS. Wu-Tang producer the RZA directs and stars in this hyper-stylized kung fu extravaganza, with Russell Crowe and Lucy Liu kicking in. R. 96m.

SEVEN PSYCHOPATHS. This violent dognapping comedy from writer/director Martin McDonagh (In Bruges) may be uneven, but Christopher Walken has rarely been better. R. 110m.

SKYFALL. James Bond battles his Freudian demons and a swishy-sinister Javier Bardem in one of the most satisfying films in 007's 50-year history. PG13. 143m.

WRECK-IT RALPH. A video game bad guy with a good heart sets out on an existential quest across the pixilated landscapes of Pac-Man, Street Fighter and the like. PG. 108m.