An American Classic at Ferndale Rep 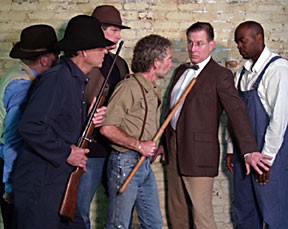 In the town of Monroeville, Alabama, a rich man's son was caught joyriding in a stolen car. His father persuaded the sheriff not to arrest the boy, but to leave the punishment up to him. He imposed three years of house arrest, but it turned into a life sentence when the young man found he could no longer face leaving the confines of his house, except at night. He became an object of mystery and fear in the neighborhood. Or so the local story goes.

This was Nelle Harper Lee's hometown in the 1930s. In her novel, To Kill A Mockingbird, Harper Lee transformed memories of her childhood (her father was the inspiration for Atticus Finch, childhood friend Truman Capote became Dill, and that ghostly young man was the probable prototype for Boo Radley) and wedded them to a courtroom drama based partly on a case of her father's, and partly on the infamous Scottsboro Boys -- young black men falsely convicted of raping a white woman. Published as the Civil Rights Movement came to fruition in the early 1960s, the book struck a chord -- it became an immediate best-seller and an enduring American classic. So did the 1962 movie version, starring Gregory Peck in his Academy Award performance as Atticus Finch, the widowed father of the tomboy Scout (Harper Lee's self-portrait) and Jem (Scout's older brother). Atticus is a lawyer appointed to defend Tom Robinson, a young black man accused of raping a white woman.

Christopher Sergel, a professional story adapter and play publisher, wrote a stage version in 1970, mostly for schools. He kept revising it, and in 1990 his latest version had its first adult production in the U.S. One version or another has been produced widely and frequently ever since, including every year for a three-week run in Monroeville. Now it's on stage at the Ferndale Repertory Theatre, through June 17.

A play with such a pedigree poses special problems. For instance, who can follow the indelible performances of Gregory Peck as Atticus, Robert Duvall as Boo Radley and Mary Badham as Scout? Well, nobody. But stage actors can present believable characters within any play, and in this play at Ferndale they do. It begins with the young actors who drive the first act. Derby McLaughlin as Scout, Denim Ohmit as Jem and Louis Sterback as Dill are all experienced (in Ferndale's youth companies, among others) and comfortable on stage. They handle the dialogue and accent admirably, move the show forward and win the audience's confidence.

Brad Curtis has the central role of Atticus. After his flamboyant character in NCRT's Chicago, Curtis is equally dominant in a quieter role. Gerri Cose's energy and diction as Maude (a neighbor who also serves a narrator in this version) is crucial in a play crammed with information and incident. Other roles -- especially Michelle Renee Kagan as Calpurnia, Gary Franklin as Bob Ewell, Wanda Stapp as Mayella, Bill Cose as Sheriff Tate and Joseph Waters as Tom Robinson -- must communicate a lot with comparatively little stage time, and they do.

Audiences that feel the power of this play in its subject and content are well-served by this clear narrative and these sharp characterizations, propelled forward by Renee Grinnell's brisk and efficient direction. Sergel's script emphasizes the central message of empathy -- of seeing the world from the other's point of view -- in part by restoring another storyline edited out of the movie version.

But a stage play can't do everything. There are much-beloved aspects of the book and film that suffer, such as the evocation of small town childhood and more specifically the full story of Boo Radley. While the book could give us the richness of the author's voice and the extension of time, and the film produced a sense of spaces and solitary moments, the stage play necessarily revolves around three key dramatic moments: the lynch mob, the trial and the attack on Scout and Jem. But while the narrative was clear and fast-moving, and the lighting and staging of the attack were effective, on opening night the emphasis of drama was generally lacking.

This may partly be a product of the inventive but crowded set, with rough-hewn houses bunched together to represent the town, which projected a claustrophobic feeling while possibly limiting flexibility in staging individual scenes. Or it could be rhythms and moments that will be discovered as the run continues.

While this play is produced often, it is also often banned, probably because of the fairly frequent use of the "n" word. But then, linking the American history of racism with fears and other attitudes about those who are different in any number of ways is central to this story and its impact. It's interesting to see actors from our rural and small town area playing characters from the rural small town South of the 1930s. It's otherwise easy to see all this as remote in time and place. But see it on stage here and now, and at least on some levels, the perspective may change.

Coming Up: North Coast Repertory opens its production of Kiss Me Kate on Thursday, May 31. Look for a review here next week. Dell'Arte International MFA Ensemble presents two thesis project programs of short plays this weekend and next: Unhinged runs May 31 and June 2, June 8 and 10, while Tooth and Claw runs June 1, 3, 7 and 9, all at the Carlo Theatre at the earlier time of 7 p.m. More on Mockingbird etc. at stagematters.blogspot.com.