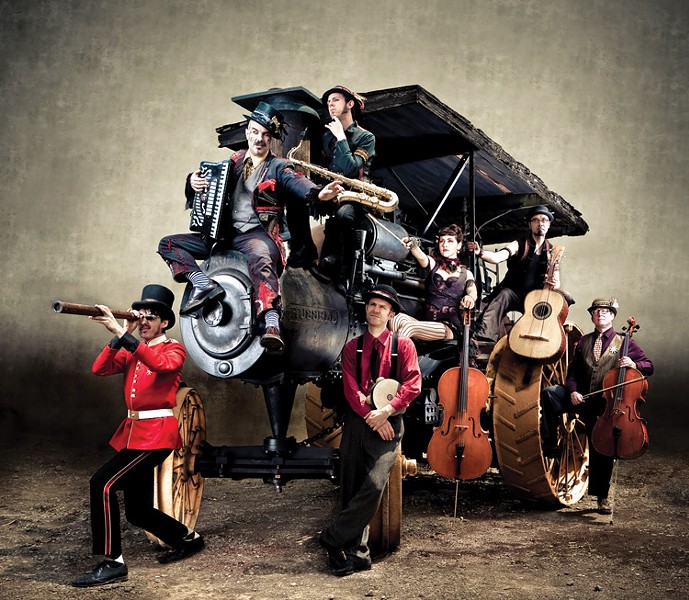 Environmental Protection Information Center. The name might seem a bit unwieldy, but that's only because it was designed around the awesome acronym: EPIC. The Humboldt-based organization has been fighting one epic fight after another for 30-plus years, mostly revolving around forests, rivers and wild lands in general (details on the latest battles at wildcalifornia.org).

Saturday's EPIC Spring Gala benefit at the Arcata Community Center promises to be an epic affair of a different sort, pairing neo-vaudeville outfits from up north and down south with like-minded locals.

Regular visits from the wild, Los Angeles-based Fishtank Ensemble have earned the band a dedicated fanbase in Humboldt. Mad gypsy fiddler Fabrice Martinez, musical saw player and vocalist Ursula Knudson (like Stern, trained in opera), flamenco guitarist Douglas Smolens and Serbian rockabilly bassist Djordje Stijepovic are just about done with a new record tentatively titled Edge of the World, which is an apt description of the territory they inhabit.

Adding to the cabaret atmosphere: belly dancers from the Ya Habibi Dance Company, fire spinners from Mischief Lab, Steven Weven and the Humboldt Circus jugglers and ironically unfunny Master of Ceremonies Albert McFee from Dell'Arte.

The EPIC Spring Gala starts at 6 p.m. at the Arcata Community Center (321 Dr. Martin Luther King Jr. Parkway) with cocktails and hors d'oeuvres followed by a sit-down gourmet dinner served by the Humboldt Fire Girls. The musical cabaret gets under way at 8.

Tickets are on two tiers: $50 gets you the dinner/show package. Skip dinner and pay just $25, $20 if you're a student. Be sure to bring extra money since drinks are extra and there's also an epic silent auction with art, restaurant and shopping certificates, vacation and spa packages, etc. Advance tickets can be found at Wildberries, Redway Liquor, at the EPIC office in Arcata (145 South G St.; 822-7711) or online at wildcalifornia.org.