An Exaltation of Atoms (Part 2) 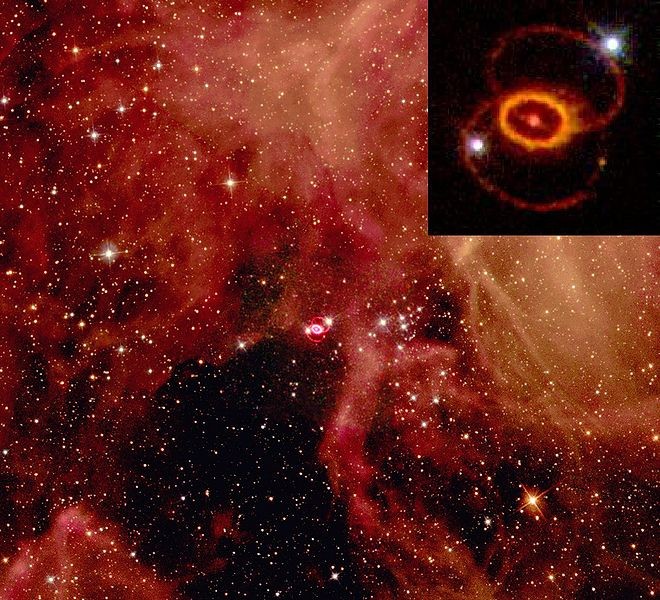 Although it may seem as if the main business of stars is to pump out light, their real work is to synthesize heavy elements from lighter ones. In a process diet-pill manufacturers might dream about, our sun loses some 5 million tons of mass every second. The intense temperature and pressure in the heart of the sun forces nuclei of the lightest element, hydrogen, to combine, or fuse, into nuclei of the next heavier element, helium. Every second, the process releases 5 million tons of mass. What we perceive as light and heat is the result of this "surplus" mass being converted into energy (E = mc2).

As the sun and other medium-sized stars like ours reach old age, a secondary process converts the helium "ash" produced during the stars' prime years into carbon, which is heavier yet. And as far as our sun is concerned, that's it: Carbon is the heaviest element that can be synthesized in stars as massive as the sun. To produce heavier elements, you need stars with masses greater than about eight times that of the sun: More mass equates to higher temperatures and pressures in a star's core, resulting in the fusion of ever heavier elements. In massive stars, the ash from each phase of the process provides fuel for each successive phase, until you get to the most stable element (because its atoms are bound tightest): iron. So at first, it might seem that iron is the end of the line. Until you get to iron, the fusion process releases energy, but to synthesize elements heavier than iron, you need to import energy. Which is where supernovae come in.

At the end of its life, every star becomes unstable. While it lives, any star -- our sun, for instance -- is in a state of equilibrium: Gravity holds it all together and creates intense pressure in the core (hence fusion), while gas pressure (resulting from the fusion) prevents the star from collapsing. Once iron is synthesized in a star having a mass greater than eight times that of the sun, the game's as good as over. The iron core grows like a cancer in the heart of the star, damping nuclear reactions in all that it touches. The star becomes fatally imbalanced and falls in on itself, collapsing into an incredibly dense "neutron star."

As the outer layers fall in toward the neutron core, that core is bouncing back from its initial collapse. The result is cataclysmic, a fury of shock waves as inward-rushing material meets the rebounding core. The energy released is so intense that to us it seems as if a new star -- sometimes as bright as the entire parent galaxy to which it belongs -- suddenly appears in the sky: a supernova. In all this explosive madness, vast quantities of heavier-than-iron elements are produced. While it took billions of years to synthesize the light elements, the heavy ones are created in a few minutes.

In the aftermath of a supernova, new stars form, phoenix-like, from the dross of the old. Nearly 5 billion years ago, the star we call the sun coalesced out of dust and gas, some of which consisted of the remnants of one or more previous generations of supernovae. Material destined to become planets and moons swirled around this proto-sun, a cloud consisting of both the basic hydrogen, helium and lithium, and of heavier star-formed stuff. Eventually, on at least one of the planets, life began. And billions of years later, an exaltation of those atoms -- an organism with iron in its blood, calcium in its bones and iodine in its thyroid -- reads this column.

Barry Evans (barryevans9@yahoo.com) appreciates each of the 1028 atoms in his body. Son of Field Notes, a compilation of Barry's columns for the last 18-months, is for sale at Eureka Books and Northtown Books.