An Excellent Balm for Bogus Times

Bill and Ted Face the Music 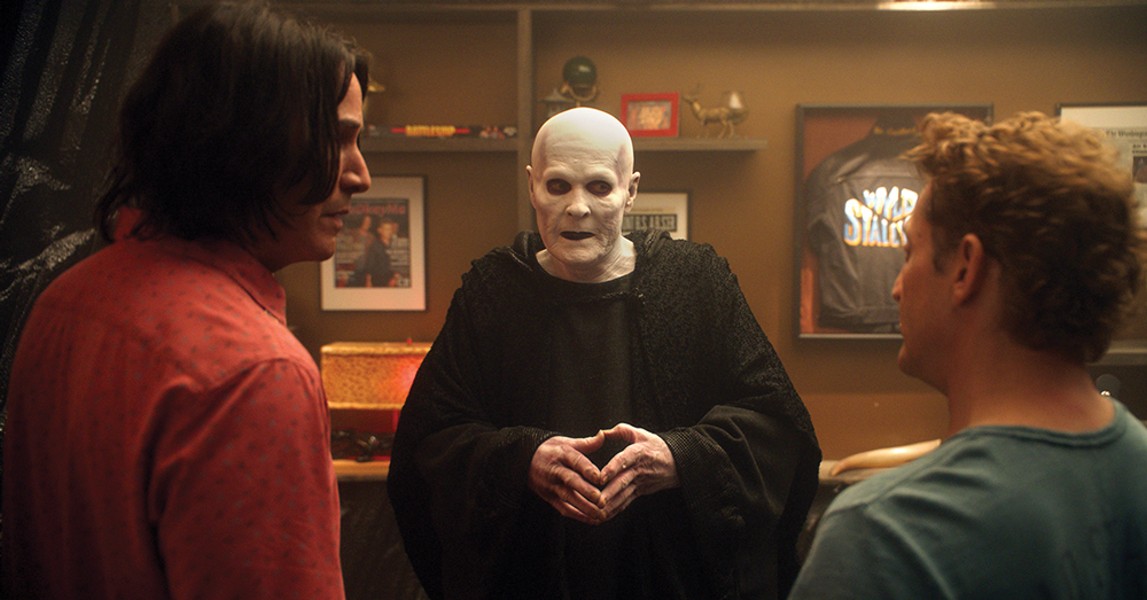 Bill and Ted Face the Music You wanna see it in the theater or ...?

As much as this is a column regarding the charming third installment in a remarkably — shockingly — long-legged franchise, it is also very much not a column about Unhinged or The New Mutants. Those two, from a distance, appear to basically be throwaways, the latter a seemingly unloved stepchild within the extended Marvel family, its release pushed back and back for years, until the plague and the inevitable reopening of theaters provided an opportunity to foist it off on a lukewarm audience, with a built-in justification for poor box office returns. The former, a modern — read: more toxic — riff on Falling Down (1993) aims to goad us into seeing it in the theater, complete with Russell Crowe calling us names in internet advertising. They exist near opposite poles on the spectrum of COVID frustration made manifest in mass marketing. The New Mutants is sort of slumping into theaters, the very image of resignation bordering on self-harm. Unhinged wants to break the door down and invite everybody tougher than a virus to swagger on in.

This is not a column about Tenet, either, though that's a different proposition altogether. Being a Christopher Nolan movie, it is sure to be big and long and labored over; it will likely be exquisitely crafted and proud of its cleverness and I'm sure I'll enjoy it when I watch it at home, which may be a while. Nolan is the last of an essentially extinct species: the figurehead director of a major studio. He is the kept king of Warner Bros. and writes his own ticket. He controls his material completely, works with astronomical budgets, shoots on film and insists his movies be shown theatrically, on the biggest screens available. Because he has figured out a system of checks and balances for his sometimes superior intellectualism, his movies appeal to a massive audience and become blockbusters. And so Tenet has been something of a bellwether for a cinematic year of — what, exactly? Crisis? Evolution? Inevitability? The studio has pushed its release too many times to count, announcing ever more tentative, wishful dates for its signalling of the end of the virus. And all of a sudden, it's here. Why now, we may never fully understand, but here it is: a multi-hundred million dollar, two-and-a-half-hour exercise in collective magical thinking.

I've had plenty of time to ponder and fester about the reopening of theaters; until this spring, I had spent an inordinate amount of time in them. And even without apocalyptic currents roiling around us, I had been increasingly disheartened by the conduct of audiences at large. With the risk factors ramped up and impatience bringing so many of us to weird breaking points, I shudder to imagine the cinema-as-Thunderdome future that may be in store. Movies are a luxury and seeing them collectively in theaters is a luxury that, speaking only for myself, can wait.

Meanwhile, I can indulge in the barely second-tier privilege of watching current releases at home. Bill and Ted Face the Music, for example.

It is a testament to the patience and optimism of my long-suffering parents that in 1989 I (with my younger brother as accomplice) was able to convince them that we should, as a family, see Bill and Ted's Excellent Adventure in the theater. It took some years for me to live this down; I probably still have some psychic debt yet unpaid. As much as my brother and I loved the movie, my parents hated it. I see, with the benefit of three decades of hindsight, that it wasn't really a movie for them, or for us. Although I loved the doofy SoCal affect of the protagonists (which I think is what rankled the parents in equal measure) and the time-traveling adventure of the thing, neither I nor they could really see past the broad strokes. By 1991, a sort of "fool me once" methodology went into effect, so it wasn't until VHS rental that I would see Bill and Ted's Bogus Journey. Consequently it has left a much shallower impression on me. And, frankly, it didn't beg another installment. When rumors began circulating a few years ago of Wyld Stallyns getting the band back together, I was ... perplexed. But now it's happened and the world is a better place for it.

Thirty years later, Bill (Alex Winters) and Ted (Keanu Reeves) still haven't written the song prophesied to bring humanity together and repair all of reality. Now they've got a hard deadline. They reclaim the time-travelling phone booth and plunge ever-further into the future in attempts to steal the song from themselves. Meanwhile their daughters (Samara Weaving and Brigetter Lundy-Paine, who both give revelatory, nuanced, next-level hilarious performances) look to the past, curating and synthesizing influences to build their dads the greatest band ever assembled.

Sure, it's a silly movie about aged-out rockers. But there is a level of care and contemplation, particularly in the characterizations, that defies dismissal. And it leaves us with a sense of connectivity, succession and hope for the future that may be hard to carry back into the shitty world of 2020, but feels good to sit with for a while. On one's own couch. PG13. 92M. STREAMING, BROADWAY, MILL CREEK.