An Ugly Clam by Any Other Name 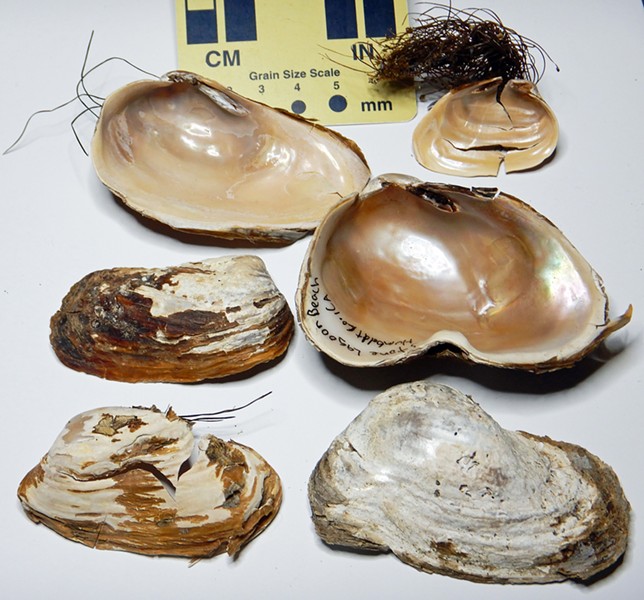 Photo by Mike Kelly A variety of clam siphons with a possible northwestern ugly clam at the top left.

Photo by Mike Kelly The pretty part of the ugly clam shell.

My buddy Castration Jones is here to judge whether the northwest ugly clam (Entodesma navicula) is poorly named. You may recall that previously, Mr. Jones, who is an authority on poorly named animals, demonstrated that the soupfin shark is poorly named.

"Thanks, Mike. First, I checked and can confirm this creature's globally accepted common name is northwest ugly clam. But is it actually ugly?"

I said, "I'm going with ugly. It's already difficult to be pretty if you're a clam. I mean, if you called our drabbest local butterfly the northwest ugly butterfly, it would say, 'Kiss my ass, I'm a butterfly.' But because the ugly clam lives in holes and cracks in rocks, it has difficulty being pleasingly symmetrical like a butterfly. The shells actually conform somewhat to the rocks as they grow, so the margin of its shell often has characteristic notches that look accidental. Unexpected notches are difficult to ignore."

"Hold on there, Mike," Jones responded. "That's insulting. And who are you to talk? You have unexpected notches scattered across your face, too."

"Exactly!" I said. "That's why I understand. That makes it OK for me to point it out. What does a butterfly like you know? Stick to beauty, Castration. Now, living in a rock can also cause the shell to grow bent and lumpy. Therefore, the ugly clam is also ugly because it often has odd bumps and twists — unlike the sleek shell of the razor clam or the perfect heart shape of the cockle."

"Hold on there," said Jones. "Look at your ugly bumps and twisted bits. How can you criticize?"

"Huh. All I can say is you need to look in the mirror and use some moisturizer," said Jones.

"Well, why don't you use that pretty mouth of yours to tell us something about the northwest ugly clam that isn't ugly?" I suggested.

"It's a fact that real beauty is found on the inside, so let's turn over that shell. See? It has a pleasing latté-like shiny smooth inside with a slight wash of iridescent mother-of-pearl. That's objectively beautiful! It even feels silky smooth."

"Sure," I said, "but you know those wiry byssal threads mussels produce to attach themselves to rocks and each other? The ugly clam has those, too — like a scraggly old beard."

"Again, Mike, it's like you're describing yourself. Now consider a live ugly clam's pair of siphons," he said. "Not only are the siphons usually a pretty red, they allow the clam to interact with the world outside its rock. The clam sucks food into the incurrent siphon and ejects waste out the excurrent siphon. And the clams are hermaphroditic, so the siphons are where they release and receive both sperm and eggs. Beautiful!"

"Fine," I said. "We've each made our case. In your expert opinion, it the northwest ugly clam poorly named?"

"Stop there. As you know, the fee for my appearance is that you tell the readers about, you know, why I'm poorly named. So pay up first you ugly motherfu-"