And the horror of war as a horror movie

Can You Ever Forgive Me? 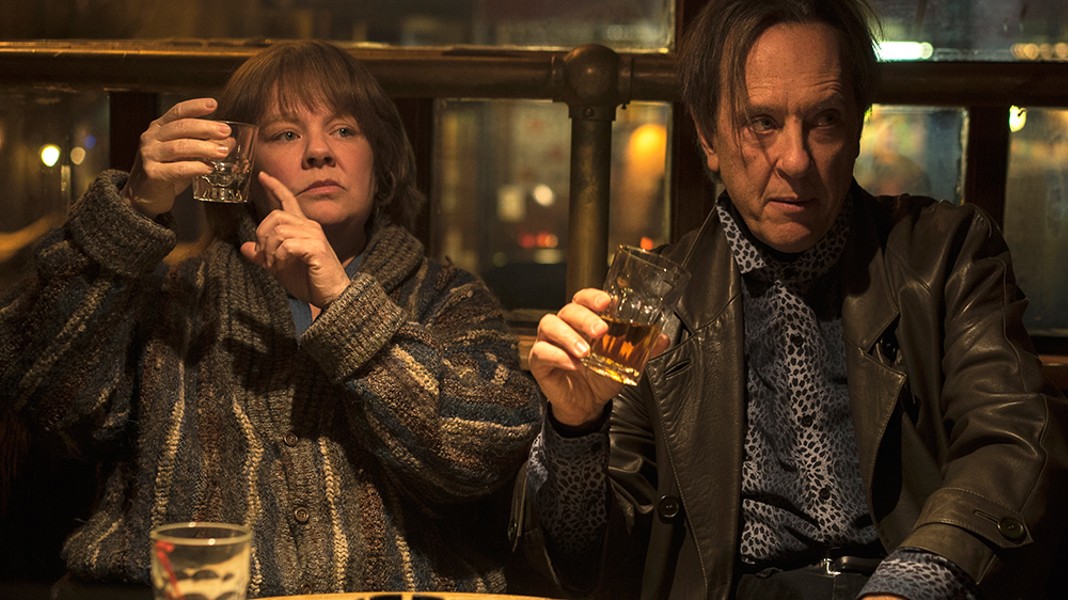 Can You Ever Forgive Me? When the bar has the news on.

CAN YOU EVER FORGIVE ME? is based on the autobiography by Lee Israel (Melissa McCarthy), a real-life biographer who began writing magazine profiles for the likes of Katharine Hepburn in the 1960s and made it to the New York Times bestseller list. It's a squalid little gem of a film, it's a tale of ambition and pride, of fame and failure, of true crime and capitulation. And it's one of the best stories in a notable year for film.

By 1991, when the film begins, Israel is trampled by an era of blockbuster novels. Her agent (a snappy Jane Curtin) has all but abandoned her, giving seven-figure advances to the likes of Tom Clancy and declaring she couldn't get Israel "$10 for a biography of Fanny Brice." Not that Israel's done herself any favors. She is deeply misanthropic, bitter (righteously, maybe), drinks heavily, has broken nearly all her relationships and, after losing a copyediting job, is near destitute, unable to afford medicine for her ailing cat Jersey.

Israel stumbles into the world of literary collectibles while selling her own letter of apology from Hepburn. It dawns on her that fabricating these mementos offers both a salary and, more importantly, a way to write again. Her forged letters display her fierce wit while delivering a "fuck you" to the literary world that rejected her. Meanwhile, she befriends a fellow barfly, street hustler Jack Hock (Richard Grant), and they begin a tumultuous relationship and eventual partnership in her ever-more-sophisticated criminal enterprise as Israel's squalor and sadness turn to exuberance at illicit success.

It's a true thriller, speeding toward a nerve-wracking conclusion. The indie powerhouse trio of director Marielle Heller (Diary of a Teenage Girl) and co-writers Nicole Holofcener (who chronicles the lives of unfulfilled and damaged women) and Jeff Whitty (Avenue Q) manages to avoid the empty mimicry of other biopics.

McCarthy is, of course, brilliant, though her character betrays no luster. She's always evoked pathos, from Gilmore Girls to her best slapstick comedy titles (Bridesmaids, The Heat), and she's not playing against type so much as plumbing a new depth of vitriol and dark wit. Grant's Jack Hock is methodically developed and the perfect companion piece to his 1987 debut in Withnail and I, playing the titular Withnail with loony, selfish, charismatic abandon. In Can You Ever, the duo's drinking is a means to temper their pains and a way to overlook each other's worst impulses. What begins as infectious mischievousness so often ends in uncomfortably familiar flames. R. 106M. MINOR.

OVERLORD. All war movies are horror movies, really, war being imagined horror brought into the physical world. Some of them are more self-aware than others, some present more directly, but if they even attempt to get at the truth of war, they all carry elements of the horror genre. The makers of Overlord (writers Billy Ray and Mark L. Smith, director Julius Avery) get this and in their understanding of the connection are able to seamlessly fold sub-genre horror into a vividly realized, surprisingly authentic — if occasionally humorous — examination of combat.

Pre-dawn, June 6, 1944: A squad of American paratroopers is dropped behind enemy lines into occupied France, tasked with the demolition of a radio tower in the center of a formerly bucolic, now fiercely held hamlet. The success of the D-Day invasion (Operation Overlord) is contingent on the completion of their mission, as the tower in question is critical to German air support.

The squad's plane is cut to ribbons by anti-aircraft fire, their ostensibly coordinated jump becoming a chaotic escape from a rapidly expanding storm of fire and blood. We follow Private Boyce (Jovan Adepo) to the ground, where he meets up with explosives expert Corporal Ford (Wyatt Russell) and the few other surviving members of their unit. They make their way into the village with the help of an initially resistant local, Chloe (Mathilde Ollivier), and learn there's a lot more going on than a fortified radio tower.

Avery, who had previously directed only one other feature, Son of a Gun (2014), executes some of the most intricate, imaginative camera moves I've seen in years, many of them in the midst of grand set pieces. It's ambitious work but not so showy as to distract from the compelling, gruesome story being told. The result is a finely drawn war movie with another identity within it — a simultaneously successful attempt at multiple genres and (very) bloody good fun. R. 109M. BROADWAY, FORTUNA, MILL CREEK.

THE GIRL IN THE SPIDER'S WEB. I've no real connection to this material. The series was an almost inescapable part of the cultural ether for a while there but I haven't read the Stieg Larsson books, nor the continuation of his series by David Lagercrantz (from one of which this is adapted). I watched one of some of the original Swedish movies but I missed the David Fincher version. Which is all to say I'm a little late to this party but was cautiously optimistic because Claire Foy is rapidly proving herself to be one the most versatile actors working today and because I very much enjoyed director Fede Alvarez's previous feature Don't Breathe (2016). But this one left me cold (partially because the theater was for some reason being kept at or around meat locker operating temperature).

Lisbeth Salander (Foy) is hired to steal some doomsday software from the NSA. She succeeds but the software is subsequently stolen from her. She pursues the thieves, whom she discovers are part of a brutal clandestine network. She is in turn pursued by the now-rogue NSA agent previously charged with protecting said software (Lakeith Stanfield).

Strong performances abound and the wintry Stockholm aesthetic is firmly in place throughout (almost too much so), but the narrative plods and meanders to the point that I found my mind frequently wandering. Probably for super-fans only. R. 117M. BROADWAY, MILL CREEK.

BORDER. A Swedish customs officer with a nose for guilt falls for a stranger in the midst of a child pornography investigation and my god, this is freaky and I give up. R. 110M. MINIPLEX.

FANTASTIC BEASTS: THE CRIMES OF GRINDELWALD. The Potter-verse spins on in this sequel to the prequel starring Eddie Redmayne and a bleached out Johnny Depp. PG13. 134M. BROADWAY, FORTUNA, MILL CREEK, MINOR.

BOHEMIAN RHAPSODY. Rami Malek brings Freddie Mercury's larger-than-life persona to screen but the rest of the band appear only as foils. The conventional plotting and scrubbed story can't dampen the exhilaration of the live-show recreations. BROADWAY, FORTUNA, MILL CREEK, MINOR.

DR. SEUSS' THE GRINCH. Benedict Cumberbatch voices the green menace (which is going to give me all kinds of issues) in this latest animated trip to Whoville. PG. 90M. BROADWAY, FORTUNA, MILL CREEK.

MUSEO. Gael García Bernal and Leonardo Ortizgris star as thieves in over their heads after taking artifacts from Mexico City's National Museum of Anthropology. MINIPLEX.

THE NUTCRACKER AND THE FOUR REALMS. The holiday classic gets the epic treatment with Mackenzie Foy, Keira Knightly and Hellen Mirren. PG. 99M. BROADWAY, MILL CREEK.

Filmland Can You Ever Forgive Me? Overlord The Girl in the Spider's Web The Miniplex Mill Creek Cinema Broadway Cinema Fortuna Theatre Minor Theatre