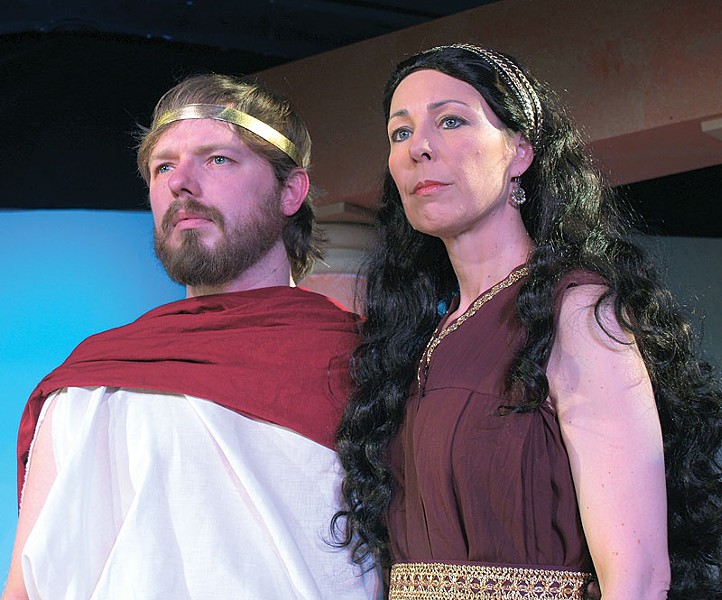 Photo courtesy of North Coast Repertory Theatre. Calder Johnson and Shelley Stewart in Oedipus the King, starting this weekend at NCRT together with the Greek comedy Women in Congress.

It's an unusual start to 2014 on stage, with a couple of rarely seen plays opening this week and a play that won't be seen at all.

Oedipus the King by Sophocles is probably the most famous of the Greek classics. But if it isn't performed (as it apparently hasn't been for a long time on North Coast stages), it can become just a bad academic memory or a remote and daunting rumor. We may forget that it is first and foremost a play to be experienced live on stage.

That's one reason Michael Thomas decided to direct it at North Coast Repertory Theatre in Eureka, along with Aristophanes' Women in Congress, a satirical comedy with sly contemporary relevance.

Another reason is that Thomas really likes these plays. "Oedipus is one of the greatest mystery stories ever told," he said. "We get all these pieces of the puzzle as we inch towards the horrifying truth." He finds Women in Congress hilarious and "eerily apt for today. It's about how women take over a 'do-nothing' Congress because the men have been such failures."

He selected modern translations that eliminate arcane references and concentrate on story and character. "There are a lot of parallels to today in the comedy, and the tragedy deals with ageless issues. I want the community to have the opportunity to see them."

This daring double bill opens at NCRT on Thursday Jan. 23, and plays weekends through Feb. 15. Each play is about an hour long, separated by an intermission.

The Man Who Didn't Come to Dinner

What isn't on stage this week is Ferndale Repertory Theatre's scheduled production of The Man Who Came to Dinner, which was quietly canceled. The production had problems filling roles early on, but the final cancellation may be related to another event: the sudden firing of executive director Brad Hills by the Ferndale Rep board of directors, as first reported by Beti Trauth in the Tri-City Weekly.

According to board member Dianne Zuleger, Ferndale has high hopes for its March show, the Monty Python musical Spamalot. Carol Escobar has replaced Hills as the show's director, with Zuleger remaining as music director. The rest of the season devised by Hills is in flux. Substitutions are likely, with one show (a musical version of The Wedding Singer) already chosen.

Hills' firing was the second quick departure of a Ferndale Rep executive director in little more than a year, both initiated by the board. Hills went on Facebook to tout his accomplishments, but legal restraints on board members frustrate any desire to respond. Whatever other factors were involved in the firing, the decision to ditch much of Hills' season also suggests play-related issues.

Hills' first statements as exec indicated that the Rep needed to mend fences with the local community. This led to the small town emphasis of this season, which he called "Family, Fun, Ferndale!" He didn't make it past its second show.

According to Zuleger: "The board is in the process of mapping out a sustainable business plan to ensure that FRT continues to produce quality, worthwhile live entertainment that appeals to older and younger generations alike."

Technical repairs to the theater are underway, and the duties of executive director are being divided among board members and volunteers for now, and maybe for longer. Though a new local hire is possible, no new national search of the kind that brought Ginger Gene from Washington, D.C. and Hills from Oregon is being contemplated. Given the turnover for people who pull up stakes and move to Ferndale, the attraction for applicants might be questionable anyway.

The comic duo Third Base (Nick Trotter and Jerry Lee Wallace) present their latest sequel Son of Myths of the Plastic Age II at the Arcata Playhouse on Friday, Jan. 24, and Saturday, Jan. 25, at 8 p.m. The pair's combination of wordplay and physical comedy also includes original music in collaboration with the New York group Bonejesters. www.arcataplayhouse.org.

As part of Mad River Steelhead Days in Blue Lake, Dell'Arte presents Fish Tales, a family-friendly variety show, on Saturday at 7 p.m. in the Carlo Theatre. It features local string band Kingfoot and local storytellers Jeff DeMark, Thomas Dunklin and Kit Mann, as well as a song by Janessa Johnsrude and Ruxy Cantir. Tickets are pay-what-you-can or free with Steelhead Days registration, but reservations are highly recommended: (707) 668-5663 ext. 5.