An Uplifting (But Cautionary) Tale 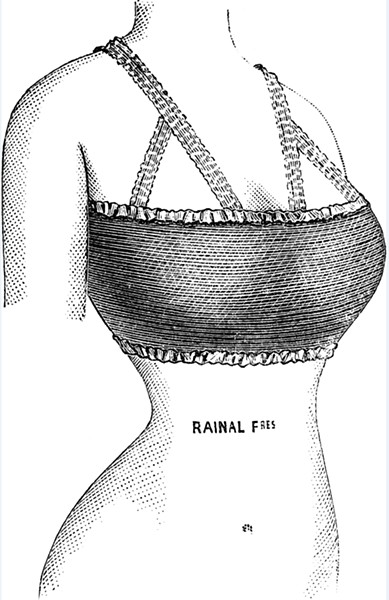 wikimedia commons 1907 French elastic brassiere, "for people who can dispense with the use of the corset. It is also used for the night, for seaside bathing or in cases of extreme breast tenderness."

A rite of passage for a girl is, I understand, putting on her first bra. The equivalent life event for a boy, of course, is the removal thereof, once he's figured out how to undo the hook-and-eye catch (extra points for one-handed and in the dark). Somehow we survive these early experiences, and the fact that most women wear bras is as unremarkable as brushing our teeth.

Bras have been around at least since ancient Roman times, in the form of wool or linen breast bands (in Latin, mastodesmos). Recently, two modern-looking bras were found in a stash of medieval garments in an old castle in Austria. Dated to 1450, they're similar to "longline" (corset-style) bras, with shoulder straps and eyelets for fastening at the back with string. Etymologically, bra, short for brassière, was once French for an underbodice, coming from bracière, Old French for a military arm (bras in French) protector. This evolved into a soldier's breastplate, and later into a women's corset.

Despite the ubiquity of bras today, several concerns have been raised about them over the past 20 years, including:

Back pain: 100 women who complained of back pain were invited to stop wearing their bras for two weeks, according to a five-year study published in 2000 in the professional journal Clinical Study of Pain. With no weight on their shoulders, most participants experienced pain relief, and three years later, 79% of them had stopped wearing a bra altogether "to remove breast weight from the shoulder permanently because it rendered them symptom free."

Incorrect fit: Researchers checked the bra sizes of large-breasted women requesting mammoplasty (breast reduction) in an investigation published in 2002 in the British Journal of Plastic Surgery. Of the 102 women in the study, all were wearing incorrect bra sizes: on average the cups were three sizes too large and the bands four inches too small. According to the researchers, "obesity, breast hypertrophy [extreme enlargement], fashion and bra-fitting practices combine to make those women who most need supportive bras the least likely to get accurately fitted bras." Additionally, bras come with matching cups, despite some 25% of women having breasts that differ by one or more cup sizes. (The left breast is usually the larger.)

Breast sag: Several studies conducted at the Centre Hospitalier Universitaire, Besançon, France, have shown that bras actually contribute to breast sagging, rather than alleviate it. Professor Jean-Denis Rouillon, for instance, followed the anatomy of 330 women over 15 years. Some wore bras, some didn't. He concluded that bras cause the chest muscles supporting the breast to partially atrophy. "Medically, physiologically, anatomically — breasts gain no benefit from being denied gravity," he said in an interview in the British Telegraph newspaper. The breasts of women who normally went braless sagged three inches less, on average, than those wearing bras. Another long-term Swedish study led by Professor Göran Samsioe of Lund University determined that bras hampered the natural development of breast-supporting elastic tissue, stating, "If natural movement is restricted by a bra that is too tight, it can affect the growth of these tissues ... there is no medical reason for [bras] and in some cases it can even be harmful."

Given our culture's aversion to seeing breasts (and nipples) move naturally under clothing, these findings are unlikely to lead to a sea change in bra-wearing. One can hope, however, that smart medicine will one day outvote the dictates of fashion and modesty.

Barry Evans (barryevans9@yahoo.com) chooses not to believe the urban legend that the bra was invented by Otto Titzling (say it aloud).