Can the new anchor store change a struggling institution? 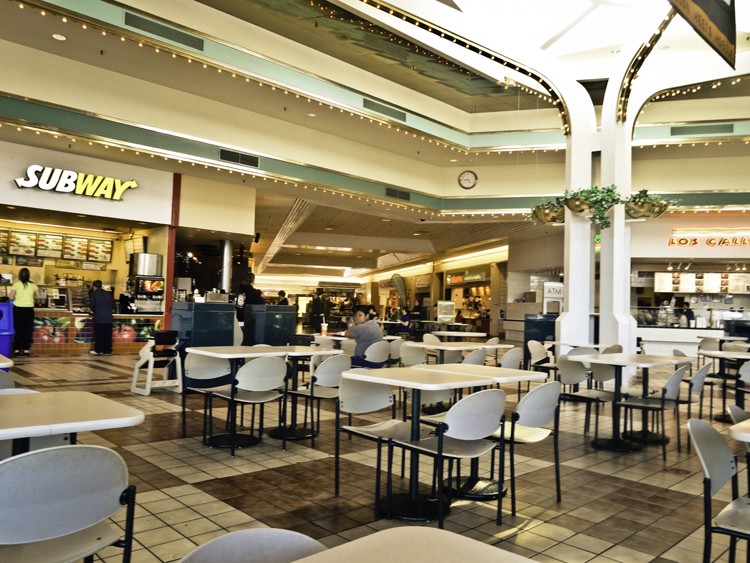 Wal-Mart is officially open at the Bayshore Mall, and so far the impact on the rest of the mall has been ... well, slight. On a Thursday afternoon, just one day after last week's grand opening, only a few more patrons walked the corridors of what was once a consumerist haven.

In the food court, toothpicked chunks of orange chicken were still being twirled at Chinese Gourmet Express. A group of Six Rivers National Forest firefighters were eating lunch. An elderly couple was having a cordial argument about how to operate their new cell phone. A few high school girls wearing "Pink" Victoria Secret T-shirts giggled as they marched past the Tilt. School is out for summer, and though it has brought a few more teens to the mall, they don't dominate as they once did.

Before I ventured further, I hit Nona's Ice Cream for a cup of coffee. Employee Ronda Oeth said the new anchor store has yet to bring more patrons Nona's way. "I've worked here for three years. The mall sucked when I started, and it still sucks." She continued, "I'm not a fan of Wal-Mart, and I don't think it's going to help us out in any way."

Past the food court, the gate at U.S. Cellular was drawn. There was a handwritten sign on it -- back in 15 minutes. From behind his broad-brimmed Mountie hat, a security guard told me that other stores do this as well; it's common practice since many have only one or two employees working at a time.

On the walk toward Kohl's I passed a young mother in bedazzled jeggings pushing her child in a stroller and a couple of seniors holding hands as they leisurely walked the empty corridor. Sitting on the bench closest to Kohl's was a peculiar man with a white T-shirt tied over his head. As I got closer I noticed he was giddily fidgeting with his black pleather fanny pack. "Hello,"  I said, as I passed by. He quickly sat up straight and chuckled from behind those all-too-familiar recessed cheeks.

Since my last visit, Eureka police arrested 55-year-old Abbie Lynn Keafer for allegedly selling methamphetamines from her motor home parked on Bayshore Way, next to the mall parking lot. Inside her motor home, investigators said, they found crystal meth, processed marijuana, pipes, hypodermic needles, cookers, and .38 caliber pistol ammunition. She had tricked her ride with external cameras, so those inside could see people approaching from the parking lot. Although the mall is as depressing to me as ever, the absence of brazen meth sales today was refreshing.

Just past the Cash for Gold kiosk, across from the empty space that used to be Anchor Blue, is the Verizon kiosk. Salesman Brad -- he declined to give his last name -- said he, too, hasn't seen more people in the mall since Wal-Mart opened.

After Brad finished helping an animated prog-rock fan with feathered hair, I continued down the mall. The florescent lights of Wal-Mart were pelting the shiny floor to the left of the playground, sending an array of reflections across the dimly lit windows of the new, yet poorly attended, Payless Shoes. Behind the glass doors Wal-Mart was buzzing with people coming to shop for the first time.

Perhaps because of the gorgeous weather, the playground wasn't as crowded as it was on my last visit. A couple of parents sat attentively watching their three kids go endlessly up and down the slide. One mother was texting while her daughter ran circles around the slide. A petite blonde teenage girl from Mrs. Fields was trying to catch business from Wal-Mart shoppers, offering samples of a slushy substance called "Lemon Breezer." Most people passed on it. I took a sample and sipped it as I headed toward one of Wal-Mart's competitors, Sears.

In 2005, Sears Roebuck & Co. merged with Kmart Holdings Co., making it the 10th largest big box (Wal-Mart is the largest). Since then the company has faced a steady decline in revenue. Last year it closed over a 100 stores. What I found at Sears, besides a few people browsing the Craftsman tools, was a ghost town. Even the electronics department was eerily quiet. For a moment I stood there, the sole observer on the shores of a sea composed entirely of flat screen TVs. I couldn't even find a sales attendant to join me in watching the displays simultaneously flicker, each with a unique tint. What's more, many of these TV's are the same ones for sale at Wal-Mart. Hell, they're even the same prices.

I knew returning to the mall so soon would be disheartening. And it was, but not for the same reasons as my last visit. Where people shop is a polarizing topic -- especially here on the North Coast. It's understandable. Many good hardworking people are living paycheck to paycheck, and they're not all going to agree on how to survive as well as improve our community. That said, most people -- no matter what side of the aisle they prefer -- really do want our community to prosper. In a way, the shopping mall, with many stores gathered under one roof, was built upon the idea of community. Each store would bring its own clientele, who would then be inclined to shop at the neighboring store. Each store would be helping the others out. That hasn't happened, but then again corporations are not people.

On my way back to the food court, I stopped to browse the DVDs and CDs at FYI. A decade ago, when it was Sam Goody, I was one of the managers. The layout is roughly the same as it was then, but the customers are in short supply. There was only one in the 20 minutes or so while I was there.

Back at the food court not much was going on. If Wal-Mart customers have trickled through to this spot, they were bucking a trend. Most Wal-Mart shoppers were entering and exiting through the big box's main doors. What will this mean for the food court? For Sears? For FYI? For GameStop? Although the data is in on what Wal-Mart does to regional and global economies, its long-term effects on this mall and our community have yet to be seen.