And Now, Huffman's Cakewalk to Congress 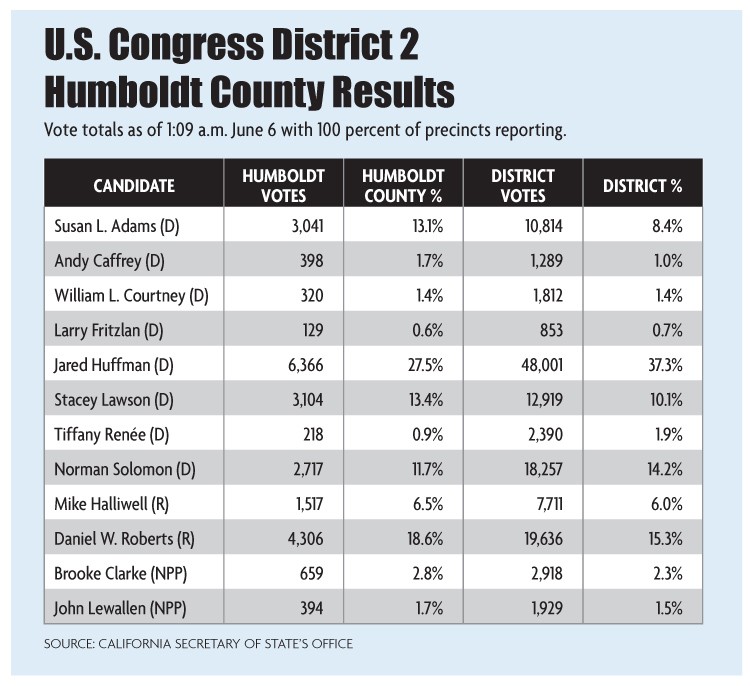 Jared Huffman, the termed-out Democratic state assemblyman, was the top vote-getter in California's newly formed 2nd congressional district while Republican investment banker Dan Roberts edged out a crowded pack of challengers to earn a spot in the November runoff.

Huffman was considered the frontrunner in the 12-way race to replace longtime Representative Lynn Woolsey (D-Petaluma), and he fulfilled those expectations by taking 37 percent of the total vote. Three other strong Democratic contenders split nearly a third of the overall vote, allowing Roberts to sneak into the No. 2 position with just 15 percent support.

It was an uncommonly exciting and contentious primary season, but Election Day proved that, sometimes, the more things change the more they stay the same. The North Coast has long been represented in the U.S. Congress by Mike Thompson, a skilled and popular politician. Each election cycle, Republicans would offer up a sacrificial candidate -- "sacrificial" because the old 1st congressional district was a liberal stronghold and Thompson is known for bringing home the bacon.

Last year, things were shaken up. The congressional districts were redrawn by a citizens redistricting committee, placing Thompson's hometown of St. Helena in the new 5th district. Humboldt County became part of the new 2nd district, which stretches all the way up the coast from the Golden Gate Bridge to the Oregon border. Woolsey chose not to run for reelection, leaving the new district wide open.

Another big change was California's new "top-two" election rules, which send the 1st and 2nd place finishers in the June primary into a November runoff, regardless of political party. This offered the intriguing possibility of two Democrats -- or even two Republicans, conceivably -- duking it out in the general election. Many expected Lawson or Solomon to take second place. Lawson was a political newbie, but she raised hundreds of thousands of dollars and campaigned as a job creator. She took flak, however, for her poor voting record (she missed eight of the last 12 elections) and for trying to hide a series of blog posts on her woo woo spirituality. Solomon has long been a hero of the far left, protesting the wars in Iraq and Afghanistan and championing environmental causes. He went negative late in the campaign, targeting Lawson with mailers.

But with Roberts landing in the runoff, we're looking at six months of a forgone conclusion. Huffman, like Thompson, is a skilled and popular liberal politician in an overwhelmingly liberal district. Barring the unimaginable, Roberts has almost zero chance of defeating him come November.