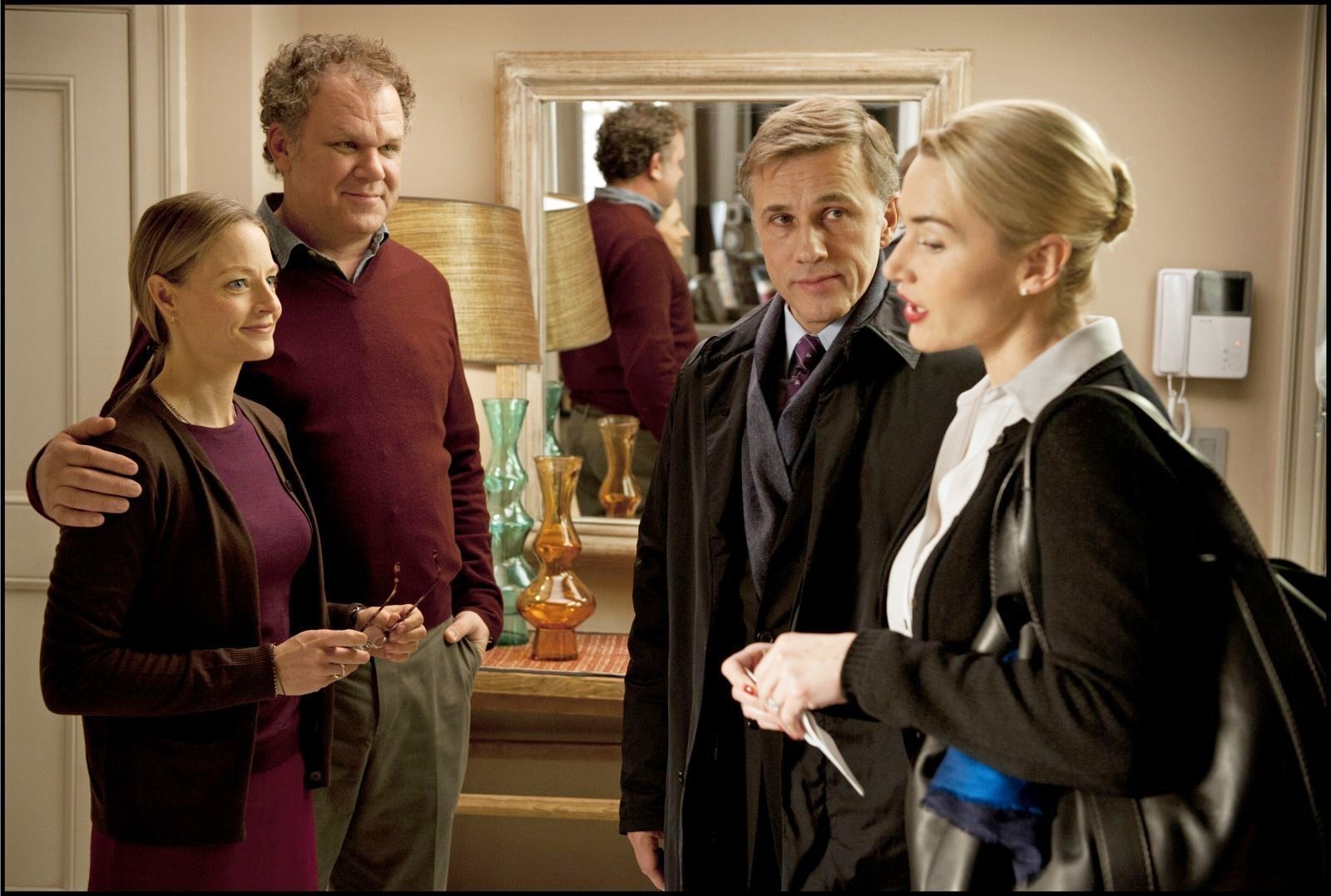 Joyful Noise. It probably doesn't come as any surprise that Joyful Noise isn't exactly in my wheelhouse. I keep an open mind, and try not to let skepticism mar my movie-going experience, but I can only do so much. I'm not much for gospel choirs or musicals. Even less so musicals about gospel choirs, so ...

While it seems a little unfair to tear down such a guileless, earnest effort, I can't forgive the superficiality with which it is attempted. Set against the backdrop of a supposedly recession-ravaged, rural Georgia town, Noise centers on the struggles of the local church choir. The choir is good enough to compete on the national stage, but not quite good enough to win. There's a minor conflict over the appointment of Vi Rose Hill (Queen Latifah) as choir director, led by the widow (Dolly Parton) of the former director, then some skirmishes when Vi Rose's chaste, repressed daughter falls for the new guy in town. Vi Rose and her husband are estranged; her son is an Asperger's savant. She speaks almost exclusively in clumsy aphorisms. The outline of the plot is basically a to-do list of small-town Christian-values clichés.

This would be fine if any of it was treated with sensitivity or insight, but both qualities are in troublingly short supply. Queen Latifah stands out among the rest of the cast for her commitment to the role. Unfortunately, this just highlights the sad flatness of everything around her.

The triumphant closing musical number comes as a pleasant surprise after a two-hour slog through forced dialog and patently untrue dramatics, but it's not enough.

Carnage. By way of stark contrast comes Roman Polanski's latest. While Noise tries unsuccessfully to convince us of the existence of a higher power/greater good within us all, Carnage is a nasty, often hilarious dissection of the social contract. It contends that there is no greater good: We act decently toward one another because we're expected to, and because we are rarely pushed.

After a violent playground incident, the parents of the two boys involved convene at one couple's New York apartment to discuss the matter. Within seconds it becomes clear that no one in the group shares an outlook, and the awkward civility of the get-together starts to fall apart. Before long the four are caught in a darkly funny, very contemporary No Exit.

Jodie Foster and John C. Reilly play Penelope and Michael, the liberal-leaning parents of the victim. Penelope's righteous indignation at the attack on her child precipitates their discussion with Alan and Nancy (Christoph Waltz and Kate Winslet).

Carnage is adapted from a stage-play, and it is a credit to Polanski and Yasmina Reza, who wrote the play and collaborated on the script, that it is free of any uncomfortable staginess. Without flash or obtrusiveness, Polanski and his cinematographer make the apartment where the whole movie is set feel both expansive and claustrophobic. This atmosphere of distance without the possibility of escape is an excellent visual representation of the script's tone. No matter how many times the conversation starts to get comfortable, someone pushes someone else's buttons, or a phone rings at exactly the wrong moment, and the epithets are flying anew. In the course of a caffeine and alcohol abetted afternoon, the two couples go to war. Along the way they do battle with class issues, gender roles, big pharma and upper-middle-class ennui. By the end, everybody is a casualty.

All four leads are pitch-perfect from beginning to end. It is especially nice to see Jodie Foster in a role that lets her really cut loose. She careens crazily from polite anger to outright meltdown, and it feels absolutely, scarily real.

Contraband. I'm a Mark Wahlberg fan, and I like a smuggler's story as much as the next guy. But I had some reservations about Contraband, mostly because it's being released in mid-January, the Land of Misfit Blockbusters. As it turns out, my concerns were more or less unfounded: It's not as bad as I was afraid it would be. That doesn't make it great, but it's passable.

It would be difficult to make a big stealing/smuggling movie these days without drawing comparisons to the work of Michael Mann. He pretty much wrote the book with Thief (1981), Heat (1995), and Miami Vice (2006). Try as he might, Contraband director Baltasar Kormakur can't quite get out of Mann's shadow. His visual style borrows heavily from his predecessor, and to his credit he shares an ability to assemble a top-notch cast. But Kormakur doesn't have the sense of quiet that makes Mann's violent punctuations so effective. And the procedural element of his movie lacks the researched authenticity of Mann's work.

But, as I mentioned, the cast is packed with talent, and it saves the movie from being completely forgettable. Wahlberg is solid, as I've come to expect, and Ben Foster adds another strong performance to his resume. Giovanni Ribisi is especially watchable as a low-rent hood with misplaced loyalties.

The Artist. The big winner at the Golden Globes finally makes it to Humboldt. The French romance, directed by Michel Hazanavicius, stars Jean Dujardin as a major Hollywood film star in the silent era who meets a young star in the making (Bérénice Bejo). As the movie world shifts over to sound, his fortunes are fading while hers are rising. Shot in the exaggerated style of silent films, in black and white, it's an unlikely hit. But the Hollywood foreign press chose it as "Best Comedy/Musical," and Dujardin won "Best Actor." Oscars here we come. 100m. Rated PG-13 for a disturbing image and a crude gesture. Opens Friday at the Minor.

Haywire. Steven Soderbergh directed this action-packed spy flick starring MMA (mixed martial arts) superstar Gina Carano (she was "Crush" on American Gladiators) as black ops renegade Mallory Kane. The Bourne-esque storyline finds Mallory double-crossed after a covert mission gone "haywire," then pursued in an international (wo)manhunt during which she must use her supreme spy and fighting skills to evade capture and turn the tables. 93m. Rated R for some violence. Opening Friday at the Broadway and Mill Creek.

Extremely Loud & Incredibly Close. Bright 10-year-old Oskar (Thomas Horn) explores the neighborhoods and people of New York City in search of the lock-box that fits a key left behind by his late father (Tom Hanks), who died in one of the Twin Towers on 9/11. British director Stephen Daldry (Billy Elliot, The Reader) worked from a script by Eric Roth (Forrest Gump, Munich) based on the novel by Jonathan Safran Foer. 120 m. Rated PG-13 for emotional thematic material, some disturbing images, and language. Opening Friday at the Broadway, the Minor and Mill Creek

Underworld Awakening. Fourth in the Underworld vampire/werewolf fantasy franchise, this film finds Kate Beckinsale returning as vampire warrioress Selene. After escaping from cryogenic suspension she must re-enter the battle between Vampire and Lycan clans and protect both against humans who want to eradicate all immortals. 88m. Rated R for strong violence and gore, and for some language. Opening Friday in 3-D and 2-D at the Broadway, Mill Creek and the Fortuna.

Red Tails. You might have seen executive producer George Lucas on The Daily Show last week hyping this WWII aerial shoot-em-up about the Tuskegee Airmen, a squad of African-American servicemen who fought the Germans in the air overseas and fought racism back home. Terrence Howard and Cuba Gooding are among the fliers who prove their mettle.  Rated PG-13 for some sequences of war violence. Opening Friday at the Broadway and Mill Creek.

Put on a bowling shirt or wrap yourself in a ratty robe, get down to the Arcata Theatre Lounge Saturday evening, order yourself a White Russian and prepare to abide. Yes, The Big Lebowski is back with Jeff Bridges as The Dude and John Goodman as Walter, both dropping f-bombs galore.

Next Wednesday's Sci-Fi Pint and Pizza Night goes mythic with Jason and the Argonauts, a classic classy 1963 fantasy starring Todd Armstrong as the Greek hero battling various monsters and an army of skeletons (created by Ray Harryhausen) while on a quest for the Golden Fleece.

January's Based on the Book series at the Eureka branch of the Humboldt County Library continues Tuesday with William Wyler's Wuthering Heights. The Oscar-winning 1939 film based on the 1847 novel by Emily Brontë stars Laurence Olivier and Merle Oberon as star-crossed lovers Heathcliff and Catherine. Charlie Myers serves as your host and leads a post-film discussion.

(Some of these movies may not be continuing, but a full list was not available at press time. Check with the theaters for updated details.)

ALVIN AND THE CHIPMUNKS: CHIP-WRECKED. People actually go to movies like this, which is why the rest of us can't have nice things. G. 87m. At the Broadway and Fortuna.

THE DEVIL INSIDE. Exorcism film follows a woman to an Italian nuthouse, where her mom has been locked away since brutally murdering three people in 1989. Mom says demons made her do it, and it really sounds like she needs a lozenge. R. 99m. At the Broadway.

THE GIRL WITH THE DRAGON TATTOO. Director David Fincher adapts Stieg Larsson's brutal literary blockbuster, which follows a reporter (Daniel Craig in this film version) and a mysterious, Gothic waif (Rooney Mara) as they uncover the dark secrets of a wealthy Swedish family. R. 158m. At the Broadway and Minor.

HAPPY FEET TWO. Animated penguins shake their downy tail feathers and crack wise with the voices of famous actors in this sequel to 2006's Oscar winner for Best Animated Feature. PG. 100m. At the Garberville through Monday.

MISSION: IMPOSSIBLE - GHOST PROTOCOL. Following a bombing at the Kremlin, the Impossible Missions Force is shut down because -- oh, whatever. Tom Cruise running, punching ... explosion! PG13 133m. At the Broadway, Mill Creek and Fortuna.

MY WEEK WITH MARILYN. Michelle Williams (Blue Valentine, Brokeback Mountain) stars as the iconic Ms. Monroe in this biopic, which takes place during her 1956 honeymoon with playwright Arthur Miller. R. 99m. At the Broadway.

SHERLOCK HOLMES: A GAME OF SHADOWS. When the powers of deduction fail, my dear Watson, we shall punch these chaps square in their gobs. Pip pip! Cheerio! PG13. 129m. At the Broadway, Garberville, Mill Creek and Fortuna.

WE BOUGHT A ZOO. Following his wife's death, a dad (Matt Damon) tries to cheer up the kids by ... well, let's not give away the plot. PG. 124m. At the Broadway and Fortuna.