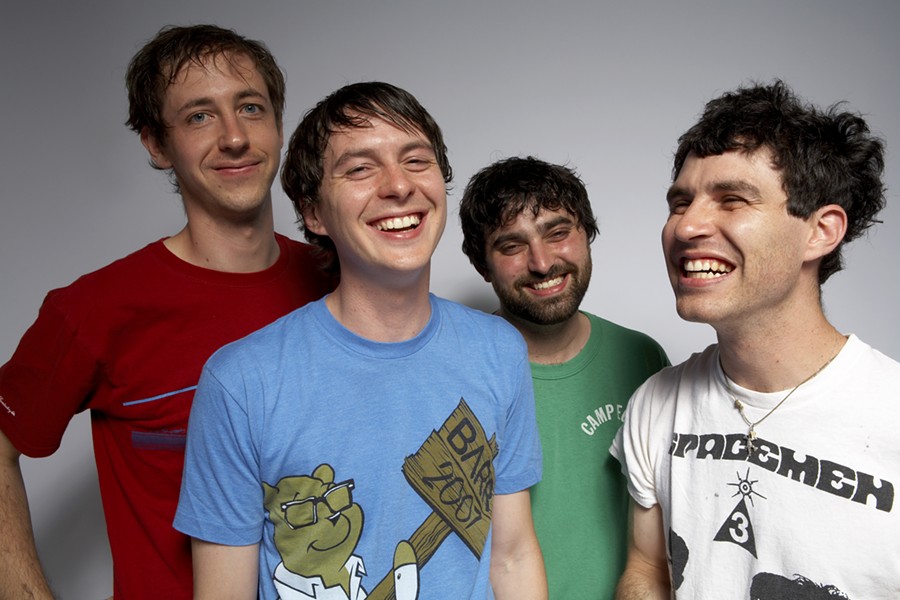 When the Washington Post wrote its preview of "the three-day mega-concert" Coachella, it highlighted a handful of headliners who are among the biggest names in music today: Kanye West, Arcade Fire, The Strokes and ... Animal Collective, a post-psychedelic band that you'd think is far outside the mainstream.

How did four animalistic friends from Baltimore and Philly -- Noah "Panda Bear" Lennox, Josh "Deakin" Dibb, David "Avey Tare" Portner and Brian "Geologist" Weitz -- join the ranks of America's hottest touring artists? It's a mystery for the most part, although it might have something to do with the fact that Deakin and Panda Bear were second graders together at a Waldorf school, where creativity and imagination are highly encouraged and they learned their lessons well.

By the turn of the millennium the future members of A.C. had begun cranking out records, beginning with a solo Panda Bear album and expanding from there, DIY style. They created their own label, Soccer Star Records, now known as Paw Tracks, and developed a lo-fi aesthetic in a series of wildly varied recordings both as a group and individually: nine albums so far, along with numerous EPs and singles. Somehow their 2009 record Merriweather Post Pavilion caught on with its Beach Boy's-esque harmonies and highly imaginative videos. The album reached No. 2 on Billboard's Indie chart, 13 on the Top 200. They followed in 2010 with a record that wasn't really a record: the full length movie/DVD ODDSAC: A Visual Album, with music by Animal Collective and experimental visuals by Danny Perez, who had previously worked with Panda Bear and NYC electro-noise band Black Dice doing music videos and psychedelic light shows for live shows.

While they've been busy making music and vids, the band has not performed live since 2009 when they toured Down Under. Recent weeks have seen much action leading up to a busy spring.

All four members of the band contributed a solo track for a cassette release that's only sold along with a line of tennies made by Keep, a sport shoe company (each member also designed a signature shoe). Money from the project goes to help protect Socorro Island off the coast of Mexico.

Then there's the new Panda Bear record Tomboy, set for release April 12 (while they are here in Humboldt), just in time for Record Store Day when it will be offered in a bundle along with a limited-edition T-shirt.

The band is playing five dates on the way to Coachella (two of them in Humboldt), then in May they head for Europe, where among other things they'll be headlining and curating the prestigious UK festival All Tomorrow's Parties. Extra bonus for the short Cali tour: an opening set of tribal trance psyche by Sun Araw, who amazed the crowd at the Playhouse last weekend.

CenterArts presents Animal Collective and Sun Araw on Monday, April 11, at 9 p.m. in the Arcata Community Center, 321 Community Park Way (moved from KBR after that show sold out almost immediately). Tickets are $28.50, a dollar off for HSU students, and available at The Works, the University Ticket Office or humboldt.edu/centerarts.

The Mateel Community Center Animal Collective show is the next night, Tuesday, April 12, doors at 8 p.m., Sun Araw at 9 p.m. Tickets are $25, available at www.mateel.org or at the Mateel on Rusk Lane in Redway. 923-3368 for more info.