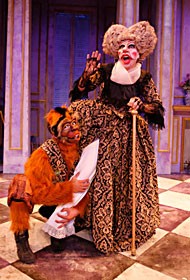 They ride beneath a diamond blue evening sky, with the silhouetted solitude of gold-green hills surrounding, and passing of course the wide phantom waters of the Blue Lake. They walk from quiet streets through the unassuming fence into the big backyard called the Rooney Amphitheatre.

They seem mostly of the current theatre-going age: early to middle Baby Boomers now (you know, my g-g-generation), folding amiably weary bones into dark green plastic chairs. In front of them the younger families array their blankets in the grass, unpacking the faux Tupperware containers of healthy munchies. Soon the children are dabbing at their strawberries while parents discreetly sip their wine. All begin the bundling — the coats and sweaters, sleeping bags and even scarves, against the chilling evening and the cold oncoming night. They face the storied stage, expectant.

Many have been ritually coming to Dell’Arte’s Mad River Festival for years, but all here — audience and performers, too — are enacting a tradition that goes back to the glimmering dawn of theatre.

In her current best-selling book, Dancing in the Streets: A History of Collective Joy , Barbara Ehrenreich chronicles much of this history. For thousands of years, people on a certain day dropped their toil and their daily selves, and put on masks and costumes for frenzies of singing and dancing that led to ecstasy and exhaustion, or even trance and speaking in tongues, before they returned revived to the village and the fields. Some of these seasonal events were meaningful ceremonies, others were more profane. Wine and wildness characterized festivals of ancient Greece and the Saturnalia of Rome, but apart from the participatory revelry there was entertainment by certain specialists. The Dorians of very early Greece held a festival called the komos, the root of our word “comedy,” presided over by the chief singer and master of ceremonies, the komoidos, or comedian.

In villages and towns of 12th-15th century Europe there was the Feast of Fools and festivals featuring Lords of Misrule — ordinary folk in the roles of princes, mayors and bishops, who by their behavior lampooned the lot. But soon the country people themselves were ridiculed by the imitating antics of the cloddish, clumsy, gullible characters called clowns.

Rulers of church and state first tried to co-opt the festivals and then ban or at least tame them, as well as demonizing the entertainers. But the festival fever always returned, and theatre formalized it. One lineage runs from Roman comedy to Commedia Dell’Arte and the broader category of physical theatre, with its blend of acrobatics, clowning, circus and farce; another crosses from the satirical comedies of Aristophanes presented at the Dionysia festivals, to the Lords of Misrule and jesters, to later political and social comedy. The whole idea of actors impersonating characters comes partly from the festival shows.

Then when a certain son of a 17th century French upholsterer who called himself Moliere took his failed theatre troupe out of Paris and into the country, he won laughing audiences with revivals of farce and commedia. It was in that early spirit that the Dell’Arte Company presents his later play, Tartuffe. It could be argued that stripping down the work of the mature Moliere to commedia elements does violence to his more sophisticated satire and urban emphasis on language, but this European Union of Italianated Tartuffe fits the festival occasion to a “oui.”

It is a telling blend. On a handsome set representing a wealthy French home, the excellently exaggerated costumes and makeup support a playing style that emphasizes the caricature in character in the mannered society of that French period (especially David Ferney as the mincing Valere), showing it to be as ridiculous as the masked stock characters of commedia (most prominently, Adrian Mejia as Orgon, the patriarchal Pantalone.)

But important for the summer festival audience, there’s a villain to boo, a damsel in distress (sort of), lovers to be separated and brought back together, some sharp social wit (an errant daughter is warned to wear her wig because, “no wig, no ruling class”), and the obligatory local references and political swipes (inserted a little more awkwardly than usual, though). As well as music, chastely stripping nuns, chases, a little juggling, an adorable little monkey, the obligatory stilt walker and a human pyramid (sort of) at the end. Also crucial to the outdoor setting: Every voice is strong and expressive, every word enunciated through the open air clear back to the dark green chairs and weathered picnic table.

The villain of the play is Tartuffe, the apparently pious, secretly lecherous and greedy hypocrite. Though he is absent from the first act, everyone talks about him. Orgon is convinced of his virtue, and is prepared to cancel the wedding of Valere to his daughter Mariane (Jacqueline Dandeneau, who plays her as winsome and dim). Orgon says he will assign her to Tartuffe instead, and signs over his fortune to him in the bargain.

As Tartuffe, Michael Fields effects his second act entrance at twilight, in a sedan chair surrounded by a shower curtain of silver spangles. He makes up for lost time with the spirited and experienced economy of his actions and characterization. That Adrian Mejia is the youngest member of the company playing the old man Orgon is more than ironic — he uses his physical suppleness to delightfully express the conventions of age. Even though he is not the title character, Orgon is the real star of the show — established by the fact that it is the part Moliere himself originally played.

As Elmire, Orgon’s young wife, Deborah Taylor Barrera is the lone non-Dell’Artisan; she brings her fresh beauty, stage skills and presence, and gets into the antic festival mood. When Elmire hides Orgon under a table to witness Tartuffe trying to seduce her upon it, the trio of Fields, Mejia and Barrera play the scene with the physical and verbal dexterity that is the Dell’Arte style at its highest hilarity.

In the end there is scant virtue to reward but it’s a happy enough conclusion, and peacefully smiling parents carry away blanketloads of sleepy children, old friends chat about festivals past, and there is music, foolery and naughtiness more to come (the adults-only late night cabaret, Red Light in Blue Lake, is next, on June 30).