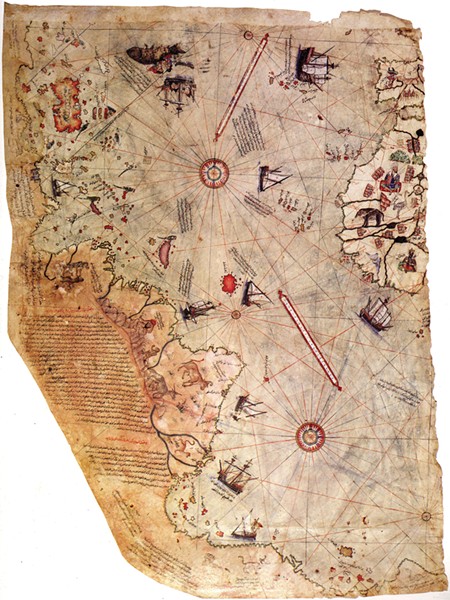 Public domain Detail of the surviving half of Piri Reis' 1513 world map synthesizes information from more than 20 previous maps of the New World, including charts by Christopher Columbus and Vasco de Gama. The map is now in Istanbul's Topkapi Museum.

Never mind Waldo or Bernie. Where's Atlantis? The site of the "lost civilization" has probably caused more trees to be cut down in the service of books and magazines claiming to know the answer than any other pseudo-scientific boondoggle. As I wrote a while back ("Atlantis: The Lost Land," Sept. 10, 2015), the mythical land of Atlantis has been located all over the world, from Troy and Santorini in the Mediterranean to Greenland, the "Bermuda Triangle" in the (eponymous) Atlantic and beyond. I failed to mention another imaginative idea: that the ruins of Atlantis live on under the thick ice cap that covers the continent of Antarctica.

The Atlantis legend seems to have arisen with Plato, writing around 360 B.C. In two of his dialogues, he tells us that beyond the Pillars of Hercules (where the Mediterranean enters the Atlantic at Gibraltar) lies an island "larger than Libya and Asia together." After an unsuccessful war against Athens, the Hellenic gods sent "earthquakes and floods ... the island of Atlantis [was] swallowed up by the sea and vanished." Historians — most of them — believe that Plato's Atlantis was a complete fabrication, especially because Plato dates its fall to some 7,000 years before the emergence of Athens as a city-state. One exception is the late scholar and former U.S. Navy Captain Arlington H. Mallery, who proposed that a map found in Istanbul's Topkapi Museum (the former Imperial Palace) in 1929 shows an ice-free Antarctica south of South America.

The map, drawn by Turkish adventurer Piri (admiral) Reis in 1513, just two decades after Christopher Columbus "discovered" the New World, incorporates information from Columbus, Vasco de Gama and other early European navigators. Most other researchers believe that what Mallery took to be the Antarctic coast is simply the result of Reis trying to fit his information to the shape of the parchment. I agree; I think we can safely assume he was making up that part of his map. For instance, "Antarctica" is shown connected to South America, complete with a picture of a snake and a note indicating "large snakes have been found, for which reason the Portuguese infidels [i.e. Christians] have not landed in these lands which are said to be very hot." The real Antarctica wasn't discovered until 1820.

However wacky, Mallery's speculations were all it took for Italian engineer Flavio Barbiero to run with the theory that Reis must have had access to earlier maps drawn when Antarctica was ice-free, which he claimed, in his book A Civilization Under Ice, was only 10,000 years ago. (It's actually more like 34 million years.) The "civilization" was — of course! — Atlantis. In Barbiero's outlandish version of history, Earth's axis was tilted differently than now, so that today's polar regions enjoyed mild climates. Unfortunately for the inhabitants of those parts, including the Atlanteans, a comet or meteor knocked the axis off-kilter to where it is today and Atlantis was buried by the subsequent snowfall.

So all you've got to do now, according to Barbiero and several copycat writers who followed him, is dig down through a mile-plus thickness of ice and you'll find Atlantis. While you're at it, I have a bridge you might be interested in.