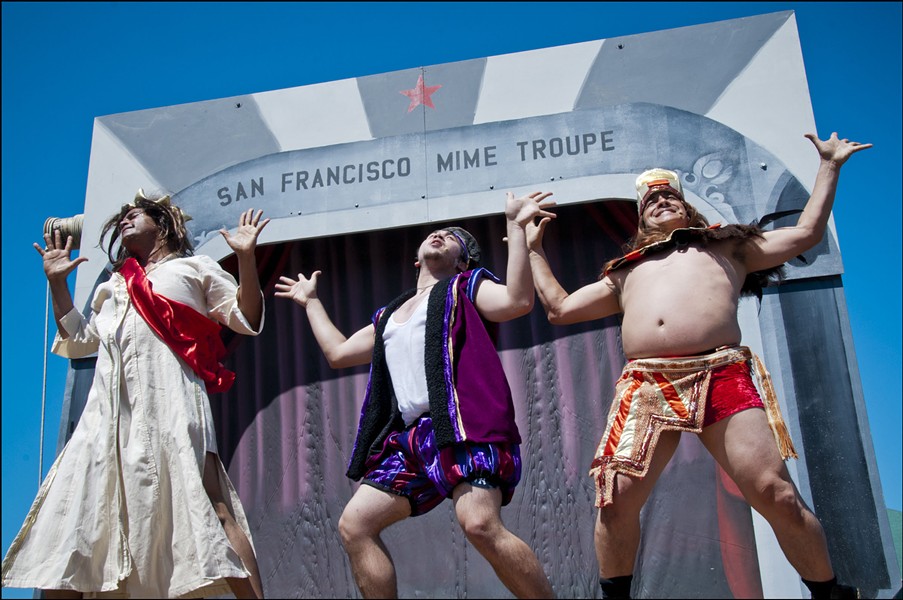 This summer's political musical comedy by the San Francisco Mime Troupe is fairly self-referential. 2012: The Musical! finds the members of the left-leaning theater company playing members of Theater BAM!, a left-leaning theater company struggling to get by while putting on none-too-commercial shows like the Shakespearean political comedy, The Revolution Will Not Be Downloaded. While their shows get their power-to-the-people message across, bills are going unpaid.

Opportunity knocks when T-Bam's fundraiser Suze (Siobhan Marie Doherty), who is also sister to (fictional) Artistic Director Elaine (Lizzie Calogero), lands a generous grant from a supposedly "green" corporate donor. The catch: They want the troupe to do 2012: The Musical! with a "Party, Party, Party" theme somewhere along the lines of Prince's apocalyptic "1999," as in, "...party's over, whoops, out of time. Tonight we're gonna party like it's 1999."

Questions arise: Is the proposed show in keeping with the company's p.c. mission? Is Theater Bam! selling out? If so, to whom? Who does the mysterious donor really represent and what do they really want? Will pragmatism trump idealism? Is the world really coming to an end?

Given the fact that the real Troupe gets funding from the NEA and from corporate donors, the script by SFMT longtimer Michael Gene Sullivan seems especially self-reflective. (Sullivan also shows up in the show as Jesus, Prez Obama and a political candidate with a price tag.) As usual various Troupe members also play multiple roles. Bruce Barthol (formerly of Country Joe and the Fish) and Pat Moran provide the songs in this tale about "the art of Mass Distraction." And as usual, a live band provides accompaniment.

Also as usual, SFMT offers the standard we're-not-that-kind-of-mime disclaimer for the uninitiated: "The San Francisco Mime Troupe does not do pantomime. We mean 'mime' in the ancient sense: to mimic. We are satirists, seeking to make you laugh at the absurdities of contemporary life, and at the same time see their causes. We travel the country and the world with our message of solidarity, comedy and the plight of the worker in our increasingly corporatized democracy, and have done shows about most of the burning issues of our time -- normally debunking the official story."

Your one and only chance to see the San Francisco Mime Troupe in 2012: The Musical! in Humboldt County is Saturday, July 30, at the Mateel Community Center in Redway. (Will they ever venture further north again?) Admission is $20, $18 for MCC members. Doors open at 6:30 p.m. for a pre-show gourmet dinner (for an additional price). The Mime Troupe Band plays starting at 7:30 p.m. The play starts at 8 p.m. For further information call the Mateel office at 923-3368 or go to www.mateel.org.