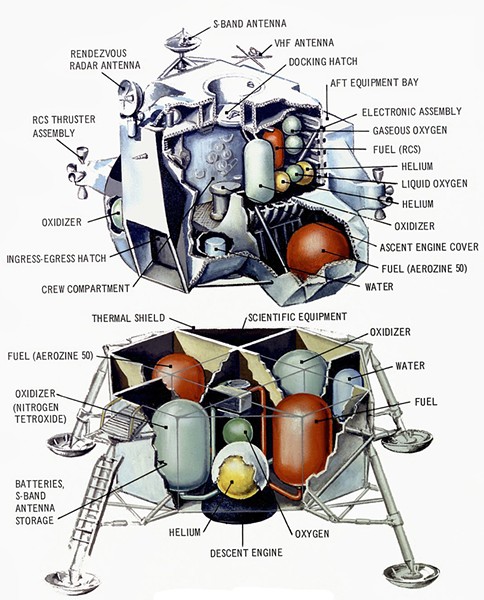 NASA Apollo's lunar lander "Eagle," the most complicated vehicle ever built. Had the ascent engine failed, astronauts would have been stranded on the moon.

"... this nation should commit itself to achieving the goal, before this decade is out, of landing a man on the moon ... No single space project in this period will be ... more important for the long-range exploration of space."

In his book One Giant Leap, Historian Charles Fishman claims that the U.S. wouldn't have landed men on the moon "before this decade is out" — by December of 1969 — if not for President John F. Kennedy's assassination. While his successor, Lyndon Johnson, was an out-and-out space advocate, Kennedy's enthusiasm wavered once the full cost of the Apollo program ($112 billion in today's dollars) became evident. JFK had more pressing domestic goals, especially once the public realized that the real rationale was simply to beat Russia. As ex-President Dwight Eisenhower said, "Anybody who would spend $40 billion in a race to the moon for national prestige is nuts."

Nuts or not, once LBJ assumed the presidency, NASA's budget, cut under Kennedy, was restored and augmented, meaning President Richard Nixon was able to reap the national glory after Neil, Buzz and 10 others landed, gathered rocks, conducted science experiments, golfed and returned safely from the moon. The last three missions even saw them driving "moon buggies" across the rugged surface. And then ... that was that. In 1972, the program came to a crashing halt, and Eugene Cernan acquired the unfortunate title of "Last Man on the Moon."

The whole glorious, risky and astronomically expensive 11-year lunar adventure nearly didn't make it. In 1961, when NASA was given the go-ahead, virtually everything that made it all possible didn't exist. No one knew how to build a sufficiently small computer to fit in a space capsule, we had no rockets anywhere near powerful enough for the job, no large launch pads, no tracking stations, no Houston Control, no spacesuits. Back then, they didn't even know what they would need.

So much was unknown. Would the lunar surface support the weight of a spacecraft? What would astronauts breathe? (Only after the tragic 1967 Apollo 1 fire did NASA abandon high-pressure 100-percent oxygen.) What was involved in building a hitherto unknown variable-power rocket engine needed for the lunar lander? What about pooping and peeing in low or zero gravity? Where would they find the expertise to design and manufacture self-contained pressurized spacesuits strong enough to resist micrometeorites, yet sufficiently flexible for astronauts to move around in? (Answer: the Playtex bra company.)

And the dust! Everyone remembers Neil Armstrong's first line on the moon, "That's one small step for a man, one giant leap for mankind." Less memorable but more significant is what he said next: "And the surface is fine and powdery. I can pick it up loosely with my toe." The fine, sticky dust proved to be a major problem for lunar astronauts, since, in the light gravity, they couldn't shake it off before re-entering their cramped landers. (Anytime I hear about the possibility of returning to the moon — perhaps building a base there — my first thought is, "How will they deal with the dust?")

Fifty years later, it all seems a distant era, almost like Columbus sailing into the unknown. It's hard to imagine the sheer hubris of the time: Kennedy setting the goal when we'd barely gotten into Earth's orbit. And now some talk about going to Mars with that same optimism and brio: We will do it because we can. No matter that the moon is three days away, compared to Mars' nine months travel time ... and all the rest of the problems. Buoyed by an "if you can dream it" attitude, the would-be Martian explorers make their plans. Based on what was achieved 50 years ago, they might just succeed.

Barry Evans (barryevans9@yahoo.com) listened to Armstrong's "one small step" on a shortwave radio in Greece.