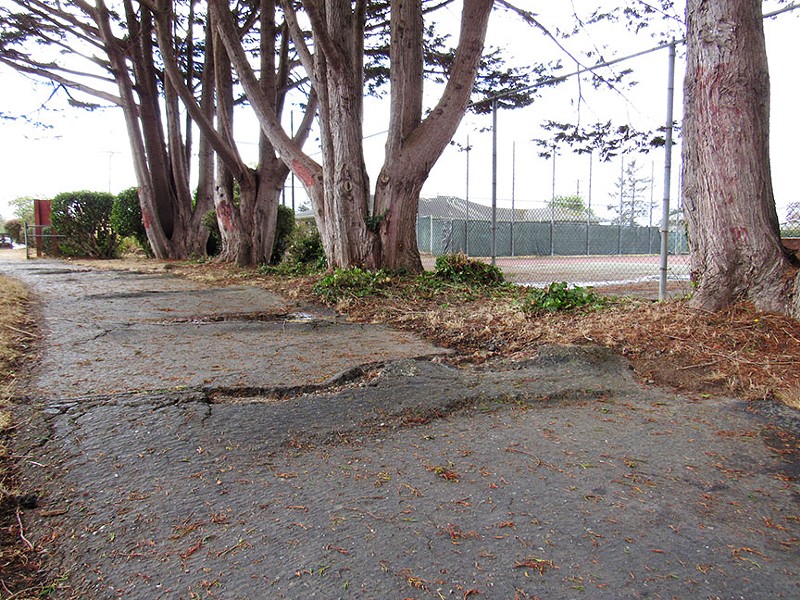 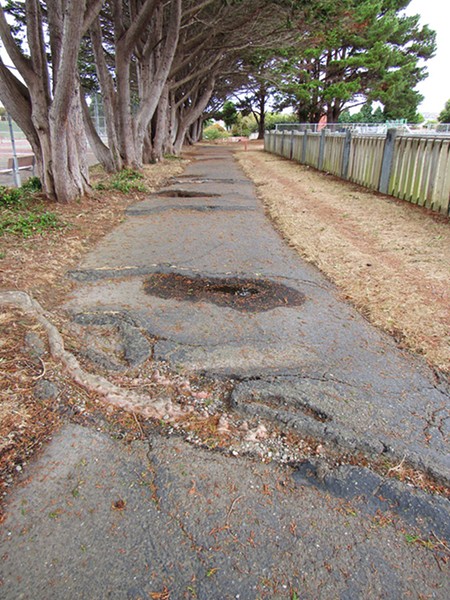 It's the last long week of summer before school starts. In Highland Park, three small kids – two boys and a girl – race past the slide and swings and begin to clamber up a tree with graffiti spray-painted on it. There is no adult watching them but they say, cheerfully, that their dad is in the parking lot, just out of sight, and that he is selling jewelry from his van. A few yards away, standing between the permanently-closed bathrooms and the unused tennis courts, is Miles Slattery, frowning down at his phone.

"We've gotten to the point with funding that we're not managing our parks as assets but rather as liabilities," says Slattery, Eureka's parks and recreation director. Slattery says the city's parks program is "woefully underfunded."

Highland Park, which sits just a few blocks east of Broadway, is one of 13 parks under the care of Slattery's team (it also maintains landscapes, parking lots and street trees). Slattery says nearly a decade of budget cuts has created an overhead of deferred maintenance on the parks system to the tune of around $2 million. In Highland Park alone, one of the city's most neglected neighborhood parks, the tennis court needs to be resurfaced ($240,000), the restrooms replaced ($110,000), the trails rehabilitated ($30,000). Slattery estimates the total amount of work to be done on the park to be about $724,000 – almost exactly the amount allocated to park operations from the city's general fund.

"We have a total budget of $800,000 annually," says Slattery. "We have six full-time employees, which includes a supervisor, and a couple temporary employees. About $430,000 of the budget goes toward staff costs. Two hundred and thirty thousand goes toward intra-government costs like fleet and IT. So that leaves $140,000 annually for all equipment, supplies and professional services needed to maintain and operate hundreds of acres, which includes 35 acres of turf."

As Slattery speaks, two men sidle past, cutting into the empty tennis courts to hunch and share a place out of the wind where their lighter will work. A quartet of young boys on scooters swarm the trail from Highland Avenue, past the tennis courts and baseball diamond, bumping over the buckled sidewalk where roots from the cypress trees have broken the cement. One boy misjudges the terrain and goes sprawling. Slattery winces.

"I hear all the time that families take their children to Arcata because they have new, well-maintained playground equipment," he says. Slattery says this is symptomatic of a self-perpetuating cycle. Poorly-maintained parks are under-used. Under-used parks become targets for what Slattery calls "inappropriate use," like the two men smoking on the abandoned tennis courts. "Inappropriate use," in turn, contributes to public perception that parks may be unsafe or unpleasant, so people do not visit them. And the cycle continues.

To augment its budget, the department pursues grant funding. This year it applied for two grants, including a community block grant, for Highland Park. According to Eureka City Schools, the neighborhood around Highland Park includes a majority of the area's school-age children. But grant funding is competitive and, while Highland might sorely need an influx of money, it hasn't yet met any of the guidelines to access available funding. The area is not a "disadvantaged community," one the grant requirements. Nor did it qualify as "park-deficient," because Fort Humboldt State Park is just a few blocks away. The city did secure $125,000 to install a restroom and playground at the foot of Del Norte Street, and is waiting to hear about a block development grant worth $850,000 for 20-30 Park. About a mile away from Highland, at the corner of California and West Dollison streets, 20-30 does meet the census designation as a disadvantaged community. The department is also working on a California Youth Soccer and Recreation Development Program grant, through California State Parks, to help rehab Hammond Park, where two separate fatal shootings took place last year. The grant is intended for "heavily populated, low-income urban areas with a high youth crime and unemployment rate."

It's tempting to see Highland Park as a metaphor for Slattery's dilemma in general. There isn't enough money — from the city or from grant funding — to give every public entity exactly what it needs. So where that limited pool of resources ends up is often determined by what the public is most vocal in demanding. Infrastructure repair and maintenance of existing resources are nowhere near as compelling as the idea of reducing crime or creating opportunities for disadvantaged youth. But Slattery's theory of "appropriate use" reducing "inappropriate use" is in line with research from the American Planning Association and other groups that subscribe to the "broken window" theory of crime prevention. Keep an area clean, well-maintained, looked-after, and it will stay that way.

"My overall point is that the community taking pride and ownership in public spaces provides an equivalent deterrent as enforcement when it comes to crime," says Slattery. "Heavily used areas by the community do not see high levels of crime."

In the past, Slattery has expressed frustration at the sacrifices his department has made during times of economic upheaval, enduring deep cuts while the public safety budget has remained relatively intact. This tension boiled over in 2015, when a $900,000 deficit forced the Eureka Police Department and the Fire Department to make difficult financial decisions. There was widespread public outcry over the potential costs to public safety. Slattery lashed out in an editorial, saying "Non-public safety departments have been cutting their budget for years now to prevent a collapse," and, in a separate interview with the Times Standard, he said "we have bled and bled and bled."

After subtracting the money allocated for the Sequoia Park Zoo, Eureka saw between 6.5 and 10 percent of its general fund dollars go to park operations over the last three years, and 34 to 47 percent going toward EPD. The proportion of general fund money going toward public safety versus parks is consistent with neighboring cities. Over the last three years, Fortuna has allocated roughly half of its general fund budget for its police department and 8 to 11 percent of its money on parks. Arcata spends roughly 40 to 45 percent of its general fund on its police department and, according to Deputy Director of Community Services Julie Neander, around 5 percent annually on its parks. Neander told the Journal that grants and community support often cover capital improvements.

The tension between public safety and public spaces has been well-illustrated in the last two years as Slattery and EPD Chief Andrew Mills tussled over how to best address encampments in the Palco Marsh area. Slattery delivered a presentation to the City Council in which he described his employees being bitten by dogs and yelled at for "trespassing." Unless public safety was upheld in the area, and the marsh campers evicted, he argued, his employees could not safely do their jobs. But Mills consistently argued that homelessness in and of itself was not a police problem, but a social issue. Both departments felt the pinch — publicly and financially, as their budgets were mined for money to pay the Sheriff's Work Alternative Program to clean out encampments and as the city wrestled with the logistics and human consequences of the issue.

Ultimately, the city prevailed in evicting the campers and the city received $1 million from the state to build a trail through the marsh. Slattery hopes that the trajectory of that area will follow that of the nearby Hikshari Trail, which was also once overrun with "inappropriate use" and now — post trail-building — sees legions of bird watchers and early-morning "appropriate" users. Still, the irony isn't lost on Slattery, that it's easier to find money to build a new area to maintain than it is to maintain existing parks. One million dollars is around half of the total deferred maintenance for Eureka's city parks. Trails are a sexy topic. Deferred maintenance may never be.