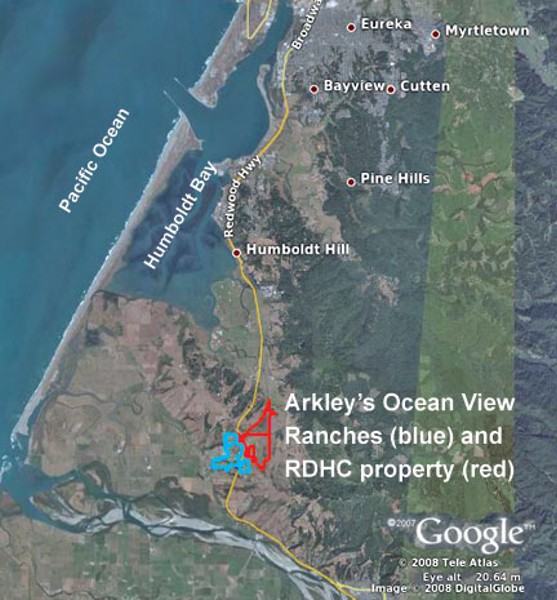 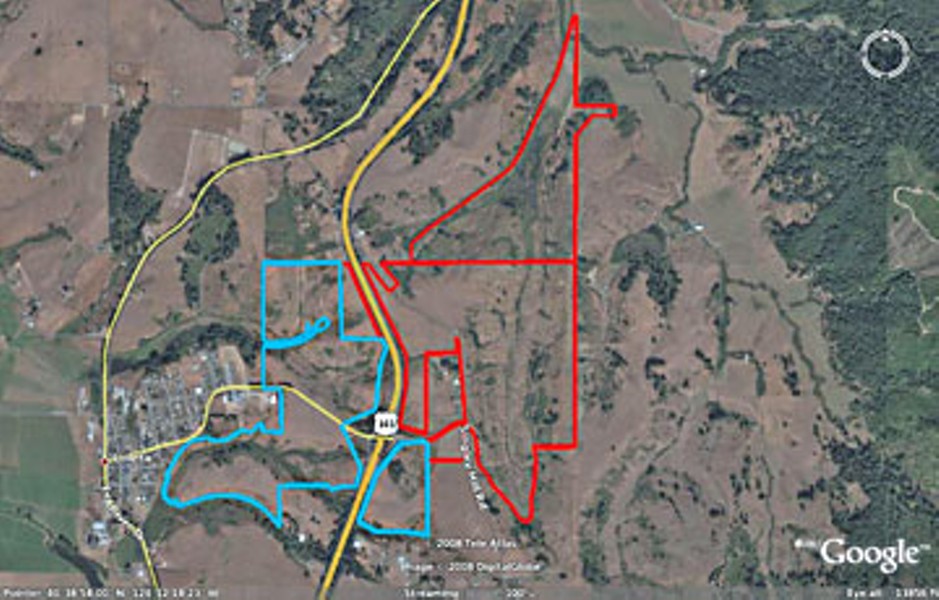 Rob Arkley is suing Humboldt County. Well, technically, two of his numerous real estate syndicates are. The disputatious Eureka businessman is up in arms over delays at the Planning & Building Department. Seems he has some prime real estate down in Loleta that he wants liberated from red tape, and he's not about to abide the Planning Department's plodding timetable.

The battle surfaced on the agenda of last week's Board of Supervisors meeting, where the Supes held a closed-session powwow with County Counsel to address the suit, brought in the names of two Arkley-owned limited liability companies -- Ocean View Ranches and RDHC. (The latter reportedly stands for "Rob's Duck Hunting Club.") The property in question covers nearly 500 acres of centrally located Loleta farm- and grassland, which Arkley purchased in a series of transactions between 2000 and 2006 for a total of almost $4.5 million. Rolling grassy hills scattered with spruce and pine, the land is bisected north-south by U.S. Hwy. 101 and straddles Loleta Drive, extending west to the edge of town, north past the railroad and east into the brush-strewn fields beyond Singley Hill Road.

Perhaps looking to subdivide the property, Arkley wants the Planning Department to determine the number of individual lots he's got. (Or, more accurately, he wants them to agree with his assessment of the number of lots.) His companies' lawyers say the County has been stonewalling the effort for more than a year and a half, dragging their bureaucratic feet way slower than the usual tortoiselike rate of governmental movement.

The lawsuit, filed in Humboldt County Superior Court on Oct. 22 and served to the County on Nov. 7, goes so far as to suggest that the Planning Department has been procrastinating on purpose, inflicting "arbitrary and capricious" delays and throwing up one hurdle after another, thereby violating the companies' right to procedural due process. "The County has repeatedly attempted to defeat [Arkley's] vested property rights," the complaint alleges, "by creating new obstacles ... without any basis in law."

What Arkley's after is called a "certificate of compliance," a county ruling on the total number of potential individual parcels contained on a given property. Humboldt County Senior Planner Martha Spencer said landowners often pursue certificates of compliance when they're getting ready to sell off their property piece by piece. (She couldn't comment on the specifics of Arkley's case since it's currently in litigation.)

"Often times we see somebody who has a large ranch that may have been in the family for a long time, and it may have been acquired in bits and pieces," Spencer said. "So we look to see how many legal lots they have." The determination is based on a number of factors, she said, including when the property was purchased, its physical characteristics and its zoning. Arkley's land is zoned agricultural.

The rulebook for these decisions lies in the Subdivision Map Act of 1976, a law that established the current standards for property divisions. Before that, Spencer said, such divisions were often done informally, "on the back of napkins."

Arkley bought the land from local contractor/engineer/businessman Trueman Vroman. Now 65 and retired, Vroman told the Journal that over the years he has had his own share of run-ins with the Planning Department, including a similar dispute over this very property.

"What happened is I submitted documentation for what I thought was 30-some-odd parcels," Vroman said. "But after review, they determined I only had 17 parcels."

This was in 1997. Vroman was hoping to do a lot-line adjustment, and though he disagreed with the County's decision he "acquiesced" (his word) for the sake of moving the project forward. "When I resubmitted the map, they determined an environmental report would be required," Vroman griped. "That was going to be very expensive."

He appealed the decision, first to the Planning Department, then to the Board of Supervisors, as he recalled, and finally in Humboldt County Superior Court. Convinced he was in the right, Vroman nevertheless decided to call off the fight after a certain point. "I was tired of spending money," he said, "so I abandoned my project."

Vroman said he disclosed all of this to Arkley when he sold him the property. However, Arkley now maintains that there are no fewer than 27 potential parcels on the land -- 17 on the western side owned by Ocean View Ranches and another 10 on the RDHC side. Among the legal arguments, Arkley's lawyers contend that any parcel divided by a road should legally be deemed two parcels (the County begs to differ), and that the analysis done for Vroman back in 1997 has no bearing on the current inquiry.

Despite not knowing the particulars of the current case, Vroman said he's on Arkley's side. In his opinion, the Planning Department -- and the Board of Supervisors, for that matter -- has been overrun with "no-growth types." Over the years, Vroman has seen increasing resistance to development on agricultural lands, which he attributes to an irrational ideological bias.

"I think we're on the path toward regulatory gridlock," Vroman said. "They [the County] are gonna increase costs to the point where we will not be able to accommodate the needs of our society. I just hope the political winds will change so my children will have housing they can afford."

He added that if he'd had Arkley's resources, he probably wouldn't have abandoned his own court battle with the County.

Nobody with the County could comment on the case since it's currently in litigation, but over the past year and a half County employees have exchanged a series of increasingly terse letters with Arkley's lawyers. Planning Department reps stated in these letters that progress, however slow, was indeed being made on the applications.

In a letter dated Jan. 28, 2008, Deputy County Counsel Carolyn Ruth insisted that County Planner Anita Punla, who had been assigned to the case, "is acting with due diligence and good faith to process these applications as quickly as she can given her existing workload."

Arkley wasn't convinced. Letters from his side got combative almost immediately, threatening legal action as far back as July 31, 2007 -- just a month after the applications had been filed -- and at regular intervals thereafter. When County Counsel allegedly failed to show up at a meeting with county staff in October of last year, Security National VP of Real Estate Randy Gans shot off a letter to Community Development Services Director Kirk Girard, saying, "the lack of professional courtesy and disregard for the applicant's time and money is inexcusable."

Interim County Counsel Wendy Chaitin suggested that there's more to the case than this exchange of bitter communiqués reveals. "There are factual issues in addition to legal issues," she said cryptically. All the dirty details would no doubt be revealed in a court case, but Chaitin aims to keep that from happening.

"I am very hopeful that something can be worked out short of litigation with the parties," she said last week. "The parties are actively speaking [and] trying to resolve the matter." Having recently sidestepped another court battle by pulling the plug on the Eureka Reporter, Arkley may be just as eager to avoid litigation.