In the footsteps of the Beats 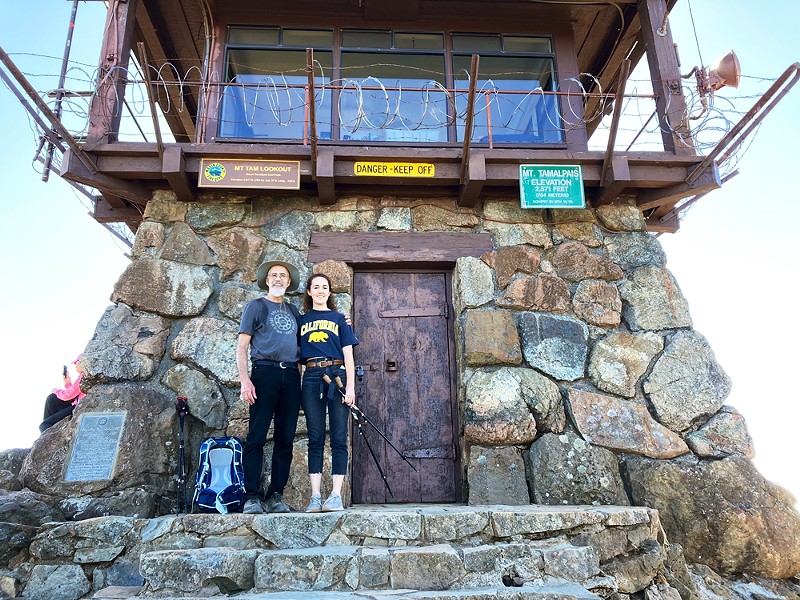 I grew up in the shadow of Mount Tamalpais in Marin County. I explored fire roads and trails, even sneaking onto the peak the night before high school graduation with friends and then toasting the sunrise with oranges and champagne before hiking down to the Mountain Theater for graduation. I also grew up in the shadow of the Beat Generation and in high school fell in love with Jack Kerouac, Allen Ginsberg and Gary Snyder.

Little did I know how connected those threads were. Until recently, I had never read Snyder's poem "The Circumambulation of Mount Tamalpais." Snyder studied Buddhism in Japan, where the monks trained him in the spiritual practice of circling a peak. When he returned to the U.S., he enlisted his friends Phillip Whalen and Allen Ginsberg to circumnavigate Mount Tamalpais, complete with Buddhist and Hindu prayers, sutras and the sounding of a conch at 10 stops along the route. People who've read his poem about it have been following in their footsteps for the last 56 years. In fact, Snyder once led thousands of people on that hike, a group so large he couldn't even see the end of the line of hikers.

After this discovery, I decided I had to hike the route myself. I invited my older daughter Dena, informing her about the 15-mile route and 3,000 feet of climbing. She hesitated but agreed. I wasn't worried about her. In fact, I spent the next six weeks training, so I wouldn't fall behind her.

My first hike was Ossagon Rocks Trail in Redwood National Park. Although a mere 3.6 miles roundtrip from the trailhead to the beach and back, the 730-foot climb left me winded. A few days later, I hiked the James Irvine Trail (out of Prairie Creek State Park) to Fern Canyon and back, a 10.4-mile trek with a 1,404-foot elevation gain. After that, I tried the Elk River Trail in Headwaters Reserve, which is 10.7 miles and 1,460 feet of climbing. By this point, I felt ready for something harder, so I tried Dolason Prairie to Emerald Creek and back, a 10.4-mile hike but with a 2,490-foot ascent. Essentially, it's all downhill to the creek and then a slog back up to the Bald Hills trailhead. A week later, I added the stretch to the Tall Trees Grove, which turned the hike into 12.9 miles and 3,390 feet of climbing. I capped off my training by hiking Grasshopper Peak in Southern Humboldt, the most challenging of all the hikes so far — 13.4 miles and 3,379 feet of climbing, some at a 30 percent grade. It kicked my butt, to be sure, but I felt ready.

On the Saturday of the hike, we got up early, drove to Muir Woods and started. The fall weather was crisp and perfect. Runners, hikers and bikers were out in force, and people hailed us as we ascended the Dipsea Trail. As we emerged into prairie, we peered south to a spectacular view of the Golden Gate Bridge, a huge tanker just heading west through the Potato Patch. We ascended to Pan Toll, crossed the road and then climbed through both forests and meadows. At the Mountain Theater, I described for my daughter how it had looked in 1976, with graduates in red, white and blue gowns, the theater packed.

From there, we took the Benstein Trail to Portrero Meadows — before the trail leveled out and brought us to the North Side Trail. On this drier side, we peered out over the Marin hills and lakes. Ahead, we saw the fire lookout on the East Peak, which was built by the same Civilian Conservation Corps members as the Mountain Theater during the Great Depression. This turned out to be our hardest ascent of the day.

Once there, we stopped for a much-needed lunch. Someone snapped a shot of us at the peak and we both took pictures of the bay, which was flecked with sailboats. It was so clear I could easily make out Point Reyes to the northwest, Mount St. Helena and Mount Diablo to the east. And because it t was Fleet Week, we saw and heard the Blue Angels roaring over the bay.

Our descent turned out to be the hardest section. Unlike Snyder and his fellow Buddhist poets, who descended down Hogback Trail, closed years ago to prevent erosion, we took the Fern Creek Trail, which was the hot and steep — steeper still along the Hogback Fire Road. At Mountain Home, we picked up the Canopy Trail but we were both pretty spent. Fortunately, the last 1.7 miles was downhill in the shade, so we trudged through the redwoods until we arrived at our car.

Driving back to San Francisco, we were both stoked we had finished. But it wasn't just the challenging hike. It was a blessing to be able to walk together all around the mountain and in the footsteps of the Beats. Though we didn't stop at the 10 prayer sites, recite Buddhist prayers or sound a conch as Snyder and his friends had done, there was still a spirituality in sharing the day with one another, sharing in the literary history of the mountain and the people who have walked its ways before us.

David Holper (he/him) served as the first poet laureate for the city of Eureka and is faculty emeritus from College of the Redwoods.