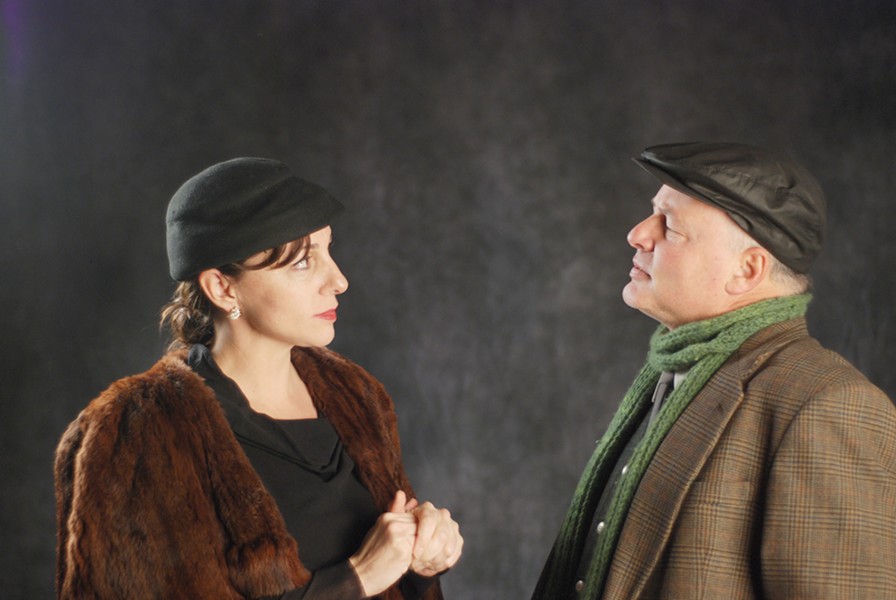 A synopsis of The Pitmen Painters, now on stage at Redwood Curtain in Eureka, has a familiar sound: based on a true story, it's about coal miners who take up painting and astound the art world. But this is not The Full Monty (unemployed British steel workers triumph with a male striptease), Calendar Girls (Yorkshire housewives raise money with a nude calendar) or even Billy Elliot (though that film about a coal miner's son seeking fame as a ballet dancer is by the writer of this play, Lee Hall).

For one thing, it's no rags-to-riches tale with a big triumphant ending. More impressively, it isn't a movie, and in its present form wouldn't work as one. The Pitman Painters is a peculiarly engaging piece of live theatre.

It's 1934 in Ashington, a coal mining town in the north of England. Five men gather after work for a class sponsored by the Workers Educational Association, an organization backed by labor unions and universities that still exists in a thousand UK communities. Three are lifelong coal miners: George (played by Lincoln Mitchell), Oliver (Craig Benson) and Jimmy (Jerry Nusbaum). Harry (Gary Sommers) is the Marxist dentist, and a character identified only as "Young Lad" (Joseph Hunt) is unemployed. That he says he's never had a job is just about the only suggestion of the ongoing Great Depression.

These men have requisitioned a course in art appreciation, but when their teacher, Robert Lyon (JM Wilkerson) shows up from King's College, they aren't interested in his slides and references to the Renaissance. They want to be taught how to look at a painting and know what it means. They want to know the secrets "of what's going on." Lyon decides that looking at paintings is not the best way for them to focus on such questions. He suggests they paint their own pictures, and they do.

The dynamic first act centers around the paintings they produce (images of them projected above the stage are of the real Ashington Group's paintings). Through their sometimes heated, sometimes funny discussions, we learn about each of them, their lives as miners and their community, while they explore perennial questions about art and life.

They talk about everything from where meaning resides (the painting, or the viewer?), intention and effect, and inevitably art, identity and class. Even if their vocabulary doesn't always ring true, they deal with weighty questions through the experience of painting as real and practical work. (Jimmy paints something yellow because he had a lot of yellow paint, which according to Gertrude Stein was the secret of Picasso's Blue Period.) All of this is surprisingly mesmerizing, thanks to the writing and the live interaction physically in front of you. It turns out that entertaining ideas can be entertaining.

There is some emotional and plot development, particularly when a wealthy art collector (Cassandra Hesseltine) offers Oliver a stipend equal to his miner's pay just to paint. But partly because these are true events, the second act is more diffuse, and aspects of British history are probably obscure for a U.S. audience. Still, the conflicts of individual and community, specifically in a working class context, may well resonate in Humboldt County. (More on this play's context at stagematters.blogspot.com.)

The cast is uniformly engaging. Craig Benson is especially effective in the most individualized role. Joseph Hunt is impressive in switching from a working class to upper class character (and accent) for a key scene. Lillian Damron steals her scene as a model who scandalizes the puritanical miners by insisting on posing in the nude.

The Pitman Painters is ably directed by Peggy Metzger and James Hitchcock, with scenic design by Jack Shay, lighting by Michael Burkhart, costumes by Catherine L. Brown, sound by Jon Tunney and properties by Laura Rhinehart. It continues at Redwood Curtain weekends through March 9. Tickets and details at redwoodcurtain.com or 443-7688.

Coming Up: Samuel Buggeln is a New York-based director of such cutting edge downtown shows as Bedbugs!!! and Go-Go Kitty, GO! He is also fluent in French. He combined these talents in his new translation of Moliere's comedy, The Misanthrope, called Hater ("misanthrope" loosely translates as "hater," though not in exactly the same sense as "hater" is used today). Dell'Arte's Michael Fields met Buggeln in New York and brought Hater to HSU for its West Coast premiere.

Hater is on the Gist Hall stage at HSU for the next two weekends, Thursdays through Saturdays at 7:30 p.m. and Sunday at 2 p.m., beginning Thursday, Feb. 28. Buggeln will also be around campus at some point. More at HSUStage.blogspot.com. For tickets, 826-3928.