As Cannabis Markets Lurch, Some Humboldt Towns Are Rising, Others Falling

A tale of two cities

First quarter sales at The Garden of Beadin' are bad. The small beading supply store, which has been operating in Garberville for 33 years, is used to seeing a slower stretch at the beginning of the year but owner Charlotte Silverstein attributes unusually poor sales in 2018 to the impact of cannabis legalization.

"In this community, we have people tightening their belts because of the legalization and the huge expense of becoming compliant," Silverstein tells the Journal. "I don't think you could find one store in Garberville that's had an increase (in business)."

Silverstein, one of more than 20 people who attended the Feb. 13 Humboldt County Board of Supervisors meeting to protest cannabis fees and taxes, says other Southern Humboldt business owners — restaurateurs, bar owners, clothing stores — are reporting a dip in revenue of 10 to 60 percent. They largely blame the drop on declining wholesale cannabis prices and the enormous amount of money it takes for small farmers to get legal, which may be sucking up former customers' disposable income.

Silverstein says many businesses saw a rise in clientele after the passage of Proposition 215, which decriminalized medical marijuana in 1996, and the influx of "trimmigrants" brought even more tourism trade to the region — people with money to spend on Czech beads and nylon thread. But Silverstein saw that begin to dwindle at the end of last year.

"We just didn't have those ladies coming in and saying, 'I'll take this and this, etc.,'" Silverstein says, adding that she will try to sustain herself with trade and road shows, but she is anxious for her business and employees.

"When you're 15 percent down in an already slow month, that's horrifying," she says. "We're just kind of crossing our fingers and praying. That's not a very good way to do business." 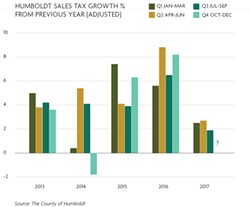 It's difficult to predict what ultimate effect legalization will have on retail businesses, although anecdotal evidence suggests there has been an exodus of money from goods suppliers and the service industry, as farmers spend their money on getting compliant or simply staying current with their land payments. Sales tax revenue might be the best indicator of where things are headed but the county does not yet have reports for what Silverstein and others are calling a dismal first quarter.

A Journal analysis of sales tax revenue in Humboldt County over the last five years shows a reliable increase, climbing by about $1 million each year. But growth slowed dramatically between 2016 and 2017. In the first quarter of 2016, sales tax climbed 5.6 percent. In the first quarter of 2017, it increased only 2.5 percent. Subsequent numbers were even worse, dropping from 8.8 percent in 2016's second quarter to 2.7 percent in 2017, and from 6.5 to 1.9 percent in the third quarter (the last quarter for which we have data). Some cities were hit harder than others, with Eureka reporting a 2 percent decline in sales tax revenues over the first three quarters of 2017 compared to 2016, and Ferndale seeing a 12 percent drop over the same period.

Gregg Foster, executive director of the Redwood Region Economic Development Commission, says to take these numbers with a grain of salt. There are a "number of factors" that could be to blame for slowed growth.

"Brick and mortar retail is having a tremendously hard time nationwide," Foster says. "There could be multiple causes here. You can't measure a trend on two points. I'd like to see a trend on two or three points."

One extra data point that might help triangulate whether legalization is having a big economic impact is tourism, which according to Tony Smithers at the Humboldt Lodging Alliance, has grown over the last two fiscal years. If tourism stays stable but sales for soft goods decrease, Foster says this is a good indication that the rug has been pulled out from under the pot economy. Foster adds that Humboldt County has a small data set, period, making it hard to draw conclusions. But he, too, has been hearing anecdotal evidence that retailers took a hit in the last two quarters. Some of it might be due to a shift toward an online economy, but many of those who are staring down the balance book blame legalization and the dip in the black market cannabis economy.

"Legalization definitely impacts our sales, as well as a number of stores around the state that sell garden supplies," says Stephen Gieder, founder of Northcoast Horticulture Supply. "We've seen about a 20 percent decline in business since the beginning of the year."

Gieder says he has seen the impact everywhere, from high-end restaurants that have gone from bustling to broke, to baristas and parents he speaks to daily who are contemplating moving because they can no longer afford to live in the area without the benefit of a cannabis-based second income.

"I think we're on the verge of some epidemic," says Gieder. "I think there's some opportunity but I also think the vast majority of people who've become accustomed to some sort of lifestyle, all of a sudden it looks grim. My grandfather worked two to three jobs to be able to support a big family. A lot of people who have big families had two to three jobs and now they have one job and it's one that gets taxed all the way. We're going to have social issues related to people not having what they need to survive."

As the grow supply business becomes more competitive, retail outfitters like NHS have increasingly moved toward commercial sales, consolidating stores and transitioning from hobbyist storefronts to bulk sales. Gieder says one unanticipated effect of legalization has been a reduction in employee turnover at his stores, as people who previously left for seasonal jobs in the industry are now seeking more traditional employment.

"The last four or five people I've interviewed have been running big farms; now they just want a stable job because last year there was some violence that happened or they didn't get paid," says Gieder, who attributes an increase in crime and violence on illegal farms to waning resources.

"We're going to see a lot more of that," he says. "The money tree has been picked pretty hard."

"I definitely saw a change in guest flow post-legalization," he tells the Journal. "I would say we're 10 to 15 [percent] off in general."

Kohl says the drop in customers began in the last quarter of 2017, with several large parties cancelling their annual holiday dinners. Some of them, he says, were people connected directly to the pot market and others were in the industries that rely indirectly on customers in the black market: car and tire sales, bartenders and furniture stores.

"People from those industries that were looking at their budgets, saying what could they cut, and fine dining is usually at the top," Kohl says.

But not all is doom and gloom. Terra Carver, executive director of the Humboldt County Grower's Alliance, points to a growing class of workers who may be earning money previously spent on consumer goods: consultants, branding experts, graphic designers and other professionals helping legal cannabis get off the ground. Will that income trickle back down into stores like Silverstein's? It's too early to tell but, with the high cost of compliance, it's a good time to be an architect, botanist, hydrologist or lawyer.

"We've seen a lot of money move into this consultant spectrum," says Carver. "We're hearing about these quarterly returns that are so dismal but consulting businesses can't find enough people to hire."

She adds that farmers are feeling growing pains as they transition from a commodity-based industry to a value-based one.

"There's a lot of chatter about the industry dying; to an extent that's true," she says. "I think our businesses are feeling the weight of moving their expendable capital into compliance costs."

Carver's prediction is that the pinch won't last forever, as the initial costs of getting compliant won't be perennial. Once the industry stabilizes, the economics may level out as well.

And in scrappy little Rio Dell, the new pot economy may translate into a reversal of the decades-long bust that followed the end of the timber boom, as the city prepares to welcome a cannabis-based business park at the site of the former Eel River Sawmill.

Rio Dell's quarterly sales tax revenue returns are symptomatic of a city fighting its way out of the hole, with numbers consistently declining in 2013 and 2014, then gradually reversing course to rise by almost 57 percent between 2016 and 2017. City Manager Kyle Knopp attributes some of this change to a number of factors, including the passage of Measure U, a sales tax that was narrowly approved in 2014, but ancillary businesses related to the cannabis industry, including a nursery, have also helped. Because of its strategic location on U.S. Highway 101 and near the junction of State Route 36, Knopp believes the city could become a distribution hub for legal cannabis.

"We've tried to take advantage of the opportunities present to the city," says Knopp. "With the changes in state law, some opportunities have arisen and we have a group of dedicated developers with great visions for cannabis businesses at the park. What we've tried to do is help facilitate their visions."

The site, which is across the highway from the main part of town, has been unoccupied since 2005. Its location and vacancy created a unique opportunity for the city, as it didn't have to compete with existing businesses or land uses, or incur the wrath of residential neighbors. Knopp says the business park is anticipated to create at least 50 new living-wage jobs, and the city is already seeing interest from developers who want to build housing for potential workers in the city, and small business owners who want to sell them goods, such as coffee and food.

"While some of the historical businesses that have relied on the black market economy might be in a bit of a slump or maybe having temporary problems, there is another economy starting to rise and that is the legal market," Knopp says. "That is a brand new market. And if you're positioned to be able to take advantage of that, I think there's potential for a community like Rio Dell."

Linda Stansberry is a staff writer at the Journal. Reach her at 442-1400, extension 317, or linda@northcoastjournal. Follow her on Twitter @LCStansberry.