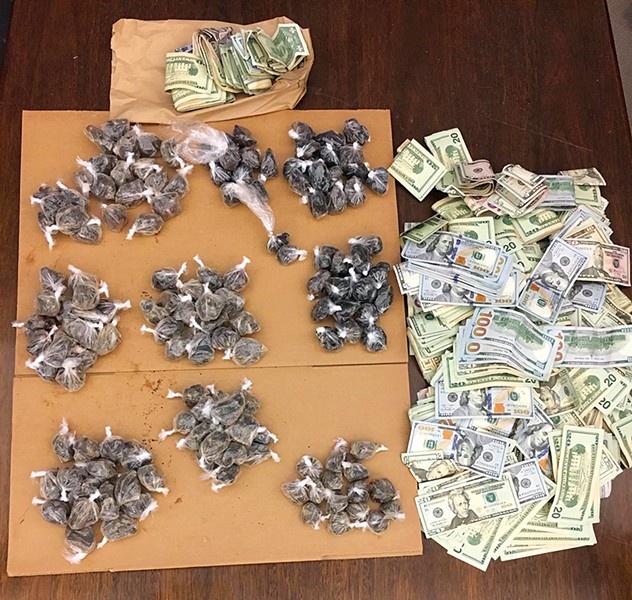 Humboldt County Sheriff's Office The yield from one of Humboldt's largest heroin busts.

Just three drug busts between August and November — including one of the largest in recent history — helped push the amount of heroin seized by the Humboldt County Drug Task Force in 2018 into the record books.

Over the course of last year, the multi-agency investigative team recovered nearly 35 pounds of the drug — more than double the volume confiscated in the previous six years combined.

While more of the highly addictive narcotic is now off of the streets, the disturbing spike also speaks to the increasing stranglehold heroin has on a growing segment of the local community.

But according to Sgt. Jesse Taylor of the task force, that's only one part of a multi-faceted explanation for the sudden explosion in heroin confiscation numbers. And, he says, the North Coast is not alone in battling the incursion of a drug once relegated to the shadows but has emerged to near commonplace stature over the last decade.

In fact, according to a recent report from the nonprofit National Safety Council, a person in the U.S. now has a greater chance of dying from an accidental opioid overdose than a vehicle crash.

"Unfortunately, I think it's going to be a trend. ... I don't see this issue going away," Taylor says of the situation in Humboldt County.

Taylor says back when he first started on patrol in 2002, methamphetamine use was widespread, while heroin arrests were rare with just a "handful of addicts and we knew who they were." Now, even as meth remains "king" on the Humboldt County drug scene, its opioid cousin is gaining ground.

"It's become such a widespread thing that it's almost commonplace to see someone nodding off in their car or in a park (from heroin use)," he says. "It's unfortunate that that's what it's become."

Taylor says people struggling with opioid addictions will often tell the same story of how they ended up on painkillers following a car accident or other medical issue, which eventually spiraled down into heroin or related drug use.

"It doesn't happen overnight but it certainly happens a lot," he says.

The shocking levels of opioid prescriptions in the county — with nearly one for every man, woman and child — and, in turn, one of the highest overdose rates in the state have long been of community concern.

According to statics from the California Department of Public Health, there were 135,617 such prescriptions made out to local residents in 2017, although that number had dropped by 17 percent to 123,616 by the second quarter of 2018.

Correspondingly, the county had the second-highest fatal opioid overdose rate in California in 2017, with 28 of the 2,196 recorded in the state happening locally, according to CDPH stats.

Preliminary data from the Humboldt County Coroner's Office show there were 26 accidental overdoses through November of 2018. While only one was solely attributed to heroin, at least 15 involved a type of opioid.

Last year, the county of Humboldt, city of Eureka and local tribes joined a federal lawsuit against some of the largest manufacturers and distributors of prescription opioids in the United States, alleging they promoted their use in a reckless way while downplaying risks of addiction and overdose.

When Humboldt Bay Fire announced in November that Narcan, a medication that can be used to reverse the deadly effects of an opioid overdose, would be carried by all apparatus, the agency noted how opioid use has "become prevalent not only throughout our community but the country."

But along with acknowledgment of the epidemic has come a backlash from community members, especially in Eureka, who are increasingly fed up with the scourge of needles that are now a regular sight at many parks, playgrounds and even their front yards.

One of the casualties in the increasingly tense debate was the timeline for opening an Aegis Treatment Centers site in Eureka for some 200 opioid addiction patients after a proposal to open the center on Harrison Street was dropped in April due to neighborhood concerns.

In a statement to the Journal on Jan. 15, Aegis' North Regional Manager Judson Lea wrote that the company is "fully committed to opening an outpatient treatment center in Eureka and we are making good progress on our search for a location but it would be premature to share any more details at this stage."

Lea stated that once Aegis has a signed lease, the company will still need to remodel and go through the licensing process with state and federal agencies.

"We remain confident that we will be able to open our treatment center/'hub' by the end of the year," the statement reads. "We look forward to partnering with the community and being a part of the solution for those seeking treatment for opioid use disorder in Humboldt."

Meanwhile, the demand for the drug remains, which brings suppliers to local streets — mainly cartels operating from Mexico up through Southern California and eventually landing in Humboldt, which is a hub for a route north into Oregon, according to Taylor.

The three busts that pushed 2018 to a new level between August and November — accounting for one-third of the year's total seizures — were all believed to be related to cartel activity, including the 9 pounds of heroin worth an estimated $250,000 that was found in a hidden compartment of a car pulled over as the result of a year-long investigation.

Search warrants in the case yielded another 2 pounds, $35,000 in cash and the arrests of three men in one of largest local heroin busts in recent memory.

More drugs coming in means more investigations by the drug task force, which focuses its efforts on meth and heroin trafficking, and that the agents from a wide swath of local law enforcement agencies have quite simply gotten better at its mission, says Taylor.

Part of that is experience, he says, "the reality (of) having been exposed to (large scale) cases and gaining experience on how to work them." He notes that the word coming back from the streets is that the drug task force operations are having an impact on supply channels, at least in the short term.

Many of the investigations take weeks, months or even a year or more, he says.

But a big reason behind the cartels' movement into Humboldt is the demand, Taylor says, something that he sees as unintentionally compounded by the passage of Proposition 47, which moved the possession of heroin from a felony to a misdemeanor, and decreased the dry-out period many users would have once gotten.

"I've talked to a lot of addicts and some of them have said, 'I preferred the old days when I had to go to jail and sober up,'" Taylor says.

Many, he says, don't want to be living this way but can't seem to shake their addiction.

"There is just this drive that really they can't help," he says. "It consumes you. You lose family over it — your children."

For now, Taylor says he expects this trend to continue. Quite simply, he says, the flood gates have opened

"It's kind of perfect storm of things that happened here in the last three or four years," Taylor says.