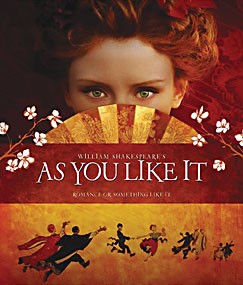 With Henry V in 1989, Kenneth Branagh burst onto the world cinema scene as a combination Orson Welles (theatre enfant terrible who directs and stars in his first major film while in his twenties) and Laurence Olivier (choosing the same play as Olivier did for his first of several director/star Shakespeare flicks, to become Shakespeare’s foremost cinematic interpreter of his time.)

Branagh brought a strong visual sense and cinematic storytelling, combined with an accessible acting style. For my money, his best Shakespeare was his second, Much Ado About Nothing (1993). A remarkable title sequence, Branagh’s easy but compelling way with the verse, the sparks flying between him and a sparkling Emma Thompson, and Denzel Washington in Shakespeare are just some of the highlights.

Then after warming up with a bracing if unknown comedy about another actor doing Hamlet (A Midwinter’s Tale, 1995), he directed and starred in his big screen Hamlet in 1996, and pulled out all the stops, filming the long version of the text for a 4-hour movie.

It won awards and may yet be judged the definitive film version, but in budgets and buzz, it’s been a downward slope for Branagh’s Shakespearian efforts ever since. His oddly charming Love Labour’s Lost (done as a kind of 1930s musical) died at the box office in 2000, ending his plans to do Macbeth and postponing his next comedy, As You Like It, for five years. Originally meant to be a big-screen feature, it’s played in the U.S. only on HBO before being released on DVD, just recently available for rental locally.

Readers of my Stage Matters column may have the impression that I’m at best skeptical about transplanting Shakespeare to bizarre times and places. That impression is correct. Branagh’s Forest of Arden is set in 19th century Japan, even though, ironically enough, it was filmed in an English wood. But this does little harm (most of the characters come from a settlement of European traders) and sharpens the play’s meaning in at least one obvious way (a wrestling match that’s important to the plot but hard to make credible becomes more theatrical and dangerous when a Sumo master is involved) and in one more subtle theme: There are a couple of religious conversions in the story that seem absurd to modern audiences, unacquainted with the Christian contemplative tradition, but they probably make more sense to us when they involve Buddhist monks.

Some people despise this play, and this film is unlikely to change their minds. But since As You Like It is my favorite Shakespeare comedy, I also have a high standard. It’s visually beautiful: shots of the forest are appropriately enchanting. Bryce Dallas Howard (now better known as Gwen Stacy in Spiderman 3) is convincing and exciting in the key role of Rosalind -- it’s easy to see why she caused such a stir when she played it on stage in New York. Her scenes with David Oyelowo as Orlando, and with an ardent Romola Garai as Celia, in the first half of the film are magical. There are excellent performances by Alfred Molina as Touchstone, Brian Blessed as both the good and bad Dukes, Richard Briers as Orlando’s loyal servant, and Kevin Kline as Jacques. Until …

Branagh’s strange, distant, almost embarrassed approach to Jacques’ “all the world’s a stage” speech, and Kline’s mumbled delivery, is deflating. Then the movie falters in other places, losing its magic spell in the second half. There are still crisp, funny performances by pretty much the whole cast, good scenes and striking images, but the film doesn’t fulfill the promise of the early scenes, and it ends with a pale imitation of the passionate dancing that ended Much Ado About Nothing, plus a postmodern coda that falls equally flat. (Branagh doesn’t appear in the film at all, though his voice is the last to be heard — saying “cut.”)

Despite my disappointments, there are illuminating moments, and Branagh at his best can still merge Shakespeare with screen entertainment. I’ll see this one again.