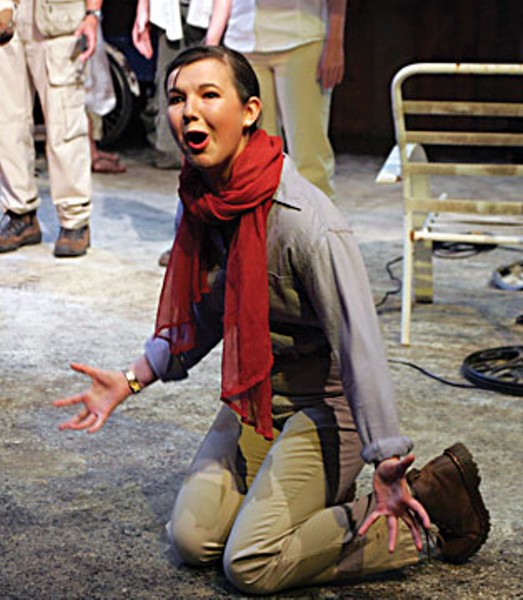 Norah Sadava as Mayor Tuttle in the Dell'Arte School's MFA Ensemble production of 'Between Two Winters.'

Robin Goodrin Nordi as Hedda Gabler in the Oregon Shakespeare Festival production of 'The Further Adventures of Hedda Gabler.'

Between Two Winters returned to the Carlo Theatre stage last weekend, not as an encore so much as an iteration — a tryout of changes before its upcoming weekend at the Magic Theatre in San Francisco. Tasked with creating and performing an Aristotelian tragedy by adapting a story from the news, the second-year students of Dell'Arte School's MFA Ensemble continued to refine this piece beyond its April premiere.

Though they did some rewriting, added a character (and their teacher, Ronlin Foreman, is now directing) the play's basic story is the same: After the first Gulf War in 1991, the mayor of a small Montana town goes to Kuwait, ostensibly to honor a soldier from her town for his heroics in saving lives during the attempts to put out the oil fires set by retreating Iraqis, but really to use the photo op with a TV crew filming it to advance her campaign for the Senate. It turns out that the soldier had raped her 20 years before, and her daughter — who is also there — is the child resulting from that rape.

The actual news story that was the starting point involved a man confessing to a rape some 20 years later, and asking forgiveness of the woman he raped. But she refused, and insisted he be prosecuted. The situation in Between Two Winters is somewhat different: the soldier (Sergeant Mulligan) was Mayor Catherine Tuttle's neighbor in their childhood, and it was a "date rape," when he returned from Vietnam.

That the audience doesn't question that an ambitious politician wouldn't bother learning in advance the name of the soldier she was there to honor is the key to the conceit, and once past that, the confrontations take over. Besides Mayor Tuttle (played by Norah Sadavd), her daughter Naomi (Liza Bielby) and Sgt. Mulligan (Matt Walley), also present are the TV news team and a campaign consultant (Ida Fugli, Barney Baggett, Jamie Van Camp, Adam Curvin and Brian Moore). The news crew acts as a kind of Greek chorus: at first witnessing, but as the story unfolding before them trumps the fairly boring story they are there to cover, their role becomes more probing, more questioning. The final character is Qazi (Deepal Doshi), a kind of Kuwaiti Tiresias who also represents the war's victims where it was fought.

Stylistically, the movie-of-the-week potential of the story is deflected by some movement and singing, but mostly by this aspect of the media becoming the chorus, and the ritualistic action and language. The first part of the play is diffuse and confusing: overlapping dialog may indicate the chaos of a TV shoot, but it doesn't help define role and character, especially when the student cast is all of a similar age. But the rest is pretty powerful, as it explores the wounds of war, the chain of brutalities, the sometimes difficult line between justice and revenge. Even the oil fires are explored for metaphor, the explosive secrets surfacing from underground.

Violence and death as well as heroes, flaws and fate appear — the constituents of tragedy — and their ambiguities are offered. There's too much asserted and suggested in an hour for this to be a fully formed play, but Between Two Winterscould be described as a poetic dance of ideas that suggests contemporary tragedy with provocative depth — with more depth than some more elaborate plays with the same general intent even attempt.

Though both plays were directed by OSF's new artistic director Bill Rauch, the earlier one was the modern classic by Ibsen, and the play this year is The Further Adventures of Hedda Gablerby Oregon playwright Jeff Whitty. I wonder how many times he's been told he's a whitty guy? (Now watch the spell-check spoil the pun.) But his play is full of wit and invention, and even if the postmodern jumble sale through time, space and pop culture technique is getting a bit familiar, this show is delightfully theatrical and surprisingly provocative in challenging the whole art-and-audience enterprise.

Hedda revives to learn that as the heroine of a cherished tragedy, she's required to stay in character. But in trying to escape the "cul de sac of tragic women," she sets out on a quest with her faithful companion, Mammy (from Gone With the Wind). Among the other characters she encounters are Medea from Greek mythology and Dorothy from The Wizard of Oz. Also two versions of Jesus. But even more than Mammy (Kimberly Scott) and Hedda's husband George (Christopher DuVal), the ones who actually become human characters are Patrick (Anthony Heald) and Steven (Jonathan Haugen), living fossils from The Boys in the Band era of flamboyant gay culture.

Hedda's odd hero's journey finally takes her to the Furnace of creation, where fictional characters like her are born, either to become trapped in immortality or to die at some point from lack of popularity, victims of the "genocide of indifference."

It's unusual for a new play to appear on the main stage of the Bowmer Theatre rather than the smaller New Theatre, but this show takes full advantage of the space and its facilities, including the revolving stage. It's a delightful moment-by-moment ride that keeps on surprising on one level or another.

In the end, the play also seems to come down on the side of tragedy as an essential expression and reflection of the human condition. But at other times on this same stage, The Clay Cartand the Sanskrit theatre's aim of dramatizing virtue offers a different reading of both art and human potential. As editor and scholar van Buitenen suggests, "Why not argue that Greek tragedy constitutes the exception, not the rule, and that it presupposes a very specific notion of moira (fate) ...?" And perhaps our arts as well as our science and politics have ignored other possibilities, including those qualities in the world and in ourselves that contribute to more fully accurate images and assessments. Which might provide a balance, even an emphasis necessary for the future of the human enterprise, and the world we tragically threaten? Something to think about, on the way home.