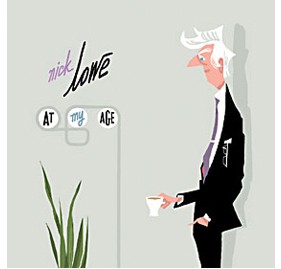 Pop's renaissance man, Nick "the Basher" Lowe, is a notable singer/songwriter who has penned songs performed by Johnny Cash ("The Beast in Me") and Elvis Costello "(What's So Funny About) Peace, Love and Understanding," among others. He's an established producer, who produced most of the early Elvis Costello & the Attractions releases. He's a co-bandleader (Lowe and Dave Edmunds formed Rockpile). He's a member of a supergroup (Little Village). And he's an accomplished solo recording artist who has garnered more attention from critics and other musicians than from record buyers.

Lowe's tunes are often filled with irony and storytelling containing a bit of "a-wink-and-a-nod" quality. He's admitted, for example, that he copped Steely Dan's "Reeling in the Years" riff for his song "So It Goes." For At My Age, he's primarily mined '60s and '70s soul/country, blending Herb Albert pop mariachi horns with a steady mid-tempo backbeat, adding his brilliant phrasing and borrowing from the likes of Brook Benton and Ace (think keyboardist Paul Carrack's lead vocals on the '70s hit "How Long"). Lowe's production, with Neil Brockbank, is spare, allowing his band to provide the subtleties, touches and groove with tight execution. Songs like "A Better Man" and "People Change" reflect an older, more mature narrator, without the sentimentality that often undermines many of his contemporaries. He keeps it straightforward.

The Basher's wry sense of humor remains intact, with songs like his cover of Charlie Feathers' "Man in Love" and "The Club" ("If you had ever had someone come along, reach in/ and pull out your heart and break it/ just for fun/ as easy as hummin' a song/ join the club..."). He makes it difficult to ignore the ugly womanizing persona of "I Trained Her To Love Me," because of the infectious phrasing and turns in the melody. Not that this is a flawless release: Lowe unfortunately concludes the recording with a true clinker, "Feel Again," which spills too far over into lounge-Vegas territory.

However, as an entire piece, At My Age achieves a crossover of country and soul akin to Solomon Burke's stellar 2006 release, Nashville -- in an odd way, as if filtered through a Ray Davies sensibility. Nick Lowe has crafted an album of refined "pure pop for now (older) people."