What goes on at those 'adult events'? You guessed it 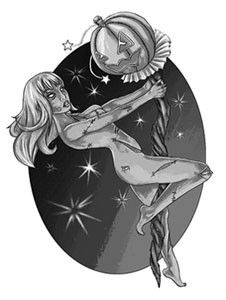 In other words, sex parties.

The Imps formed after the organizers of a similar group, known as Club Risqué, hung up their chaps and whips. Consisting of three women and a host of volunteers, the Imps have held several "pansexual" events locally, with more planned for the future.

Tickets for Saturday night's party had to be purchased in advance at either Good Relations or The Pleasure Center (or online for a bit extra). For $35 cash -- or $30 if purchased before Oct. 11 -- you received an envelope containing a ticket, two pages of rules and a legal waiver.

The two lists of rules -- 30 in all -- included common sense imperatives. No. 1: "Ask before you touch any other person or their belongings." No. 5: "It is your responsibility to inform anyone you interact with of any communicable diseases or illnesses you may have."

Then there were some eyebrow-raisers: "14. No play involving urine or fecal matter." And "16. Blood play is permitted only through prior arrangements with Impropriety Society staff." Check and check.

There were also strict rules regarding confidentiality, which is why I can't tell you the name of the bank teller who dressed as a fuzzy coyote or reveal the identity of the woman who milked herself onto a giddy man's naked torso.

The ticket listed no venue location, just a phone number with instructions to call after 10 a.m. the day of. When you did, a recorded voice gave the cross streets and a description of the exterior of the building. Trouble was, the message was a bit garbled, and the cross streets were difficult to understand.

At the real venue, a doorman checked IDs before allowing passage through a hallway draped with black streamers and pulsing with the staccato flashes of a strobe light. Inside, policemen, sexy nurses and a Greco-Roman wrestler mingled with fairies, furries and leather-bound dominatrices while a DJ played hypnotic trance music.

That one pair of exposed breasts was soon joined by others, as well as ass cheeks, leather straps and package-revealing shorts. Attendees nonchalantly checked out the surroundings and each other. On one wall, a list of "cum-mandments" offered valuable advice such as "No means no" and "Drunk is not sexy."

In one corner, snacks were arranged on folding tables, including apple wedges to dip in the caramel fountain, chocolate-frosted cupcakes and little sandwiches cut in the shape of pumpkins. Halfway down the longest wall, a stage had been erected with Christmas lights illuminating the perimeter and a dance floor beyond, where costumed partiers had already begun shaking their scantily clad groove things.

In the middle of the building, separated by makeshift walls, "the dungeon" offered a playground for the S&M set. It contained a variety of kinky torture apparatuses -- wooden beams, padded restraints -- and a table of "community toys" including rope, clamps, paddles, a blindfold, a rubber hand, whips and -- for reasons that remain a mystery to this reporter -- a plastic toy stethoscope.

At the far end of the dungeon, a man in a trench coat and feather mask was clamping clothespins to the exposed breasts of a bound woman wearing a sexy maid outfit.

Patrons who found this carnal carnival overwhelming could take a breather in the "blue room," where no sex or propositioning was allowed.

Shortly after 11 p.m., the stage show began with a performance by a transsexual man calling himself "The Hooker." (S)he sang and writhed about like Michelle Pfeiffer in "The Fabulous Baker Boys," only with slightly broader shoulders. This was followed by a bawdy folk tune from a man wearing only a mustache and a high-slung guitar, his dangling appendage keeping time like a flaccid metronome.

The highlight of the variety show was a choreographed Michael Jackson routine featuring two fully clothed couples -- the men sporting pink paper penises while the women donned red paper hearts. "Off the Wall" transitioned into a hip-hop song, which then led into "Thriller," complete with zombie dancing and a striptease finale.

The final performance was a frenzied lesbian sex duel that prompted lusty howls of approval. After a few reminders from the organizers on the ground rules, the pent-up revelers were loosed upon each other, and the orgiastic bacchanal began.

Not everyone was fornicating. In fact, most folks seemed content to dance, watch, cuddle and mingle. Sure, there were a few looky-loos who'd clearly come just to watch people hump. (They were the ones who didn't bother with costumes.) But even they were welcomed in the spirit of kinky indulgence.

As late night became early morning, the sweaty and spent carousers began making their way outside, where another party was also breaking up. These noisy revelers were of a different ilk -- drunk and belligerent, shouting at each other, spilling off the sidewalk into the street. A souped-up Honda Civic revved its engine and squealed toward the crowd, which jumped back, then spat curses at the driver.

Before the evening began, I'd been wondering just what the hell I was getting myself into. What kind of perverts would attend such an event? What ungodly variety of depraved icky-ness would I be exposed to? And here I found myself staring at this other crowd, which reeked of beer and aggression, and thinking, "Wow. Thank God I wasn't at that party."