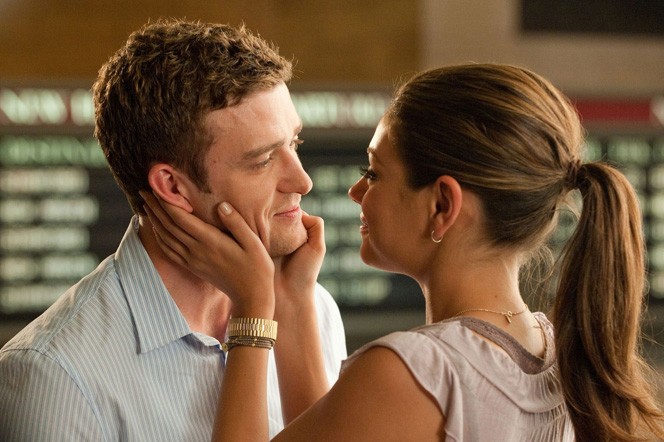 FRIENDS WITH BENEFITS. Inevitably, and inaptly, this film will be compared to the recent No Strings Attached, a completely lame romantic comedy despite the presence of Natalie Portman and perhaps partly because of the presence of Ashton Kutcher. Friends with Benefits is in a different league. For one thing, it has a savvy script and a director, Will Gluck, who knows how to showcase the two attractive and talented stars.

Okay, the basic plot is similar to No Strings, as well as to a number of other films in this sub-genre including the little-seen indie Friends (with Benefits) that was screened in 2009 at the Seattle True Independent Film Festival. But very few of such films have two romantic leads as attractive and talented as Justin Timberlake and Mila Kunis who also have great chemistry.

Timberlake has come a long way since the famous halftime "wardrobe malfunction." He was a standout in supporting roles in The Social Network and Bad Teacher, and here he is excellent as a slightly offbeat romantic co-lead. Mila Kunis is a bit of a revelation. She came close to stealing all the scenes where she appeared in Black Swan, and probably would have had the lead not been someone as good as Natalie Portman. She similarly lights up the screen in Friends but, additionally, she shows a great talent for comedy. Her timing is impeccable and, happily, she is matched by Timberlake as we watch the two enact the friends who have sex pas de deux.

In a certain way, Friends reminded me a bit of Before Sunset until it devolved at the end into the usual conventions of the Hollywood romantic comedy. Part of this comparison has to do with the fact that much of Friends consists of the two leads simply talking, as with Ethan Hawke and Julie Delpy in Sunset, although in the present film the dialogue is pre-scripted.

While Timberlake and Kunis are great, they are supported by a fine cast that includes Patricia Clarkson, Woody Harrelson, Richard Jenkins and Jenna Elfman. In the end, Friends tries to both send up romantic comedy conventions while also satisfying them. Still, it's a funny and enjoyable journey along the way. Ignore the No Strings Attached comparisons and give the film a chance. R (simulated sex and "bad" language). 110m. At the Broadway and Mill Creek.

CAPTAIN AMERICA: THE FIRST AVENGER. I can't say I was exactly excited at the prospect of seeing Captain America, but I'll admit there was a certain degree of anticipation. My nerdiness never really found purchase in comics, so I'm only familiar with cursory details of the Captain America mythology. But the notion of a superhero movie set in World War II Europe has a lot going for it, by my standards. Pleasantly, the movie delivers rich detail in the costuming and sets. And the cinematography and directing lend a sort of throwback feel to the whole show which, while not mind-blowingly effective, is generally successful.

The problem is that the story never really gets its legs under it. Despite all the high drama, arch sentimentality and good old-fashioned fascist bashing it's hard to care about what Captain America's up to. Star Chris Evans turns in a perfectly serviceable performance as Steve Rogers/Captain America, and his chemistry with co-star Hayley Atwell is generally convincing. Hugo Weaving does his best Werner Herzog impression as the nefarious Johann Schmidt/Red Mask, a Nazi superman whose plans for world domination are too grandiose even for Hitler to get behind.

As usual Tommy Lee Jones is a stand-out, lending a desperately needed comic sensibility. Sadly the shallow script never fully fleshes out the characters, so I couldn't commit to any genuine concern for their well-being. I won't even mention the rogue's gallery of Captain America's inner-circle here, because the movie doesn't give enough information to describe them beyond a minor sketch: One is a Japanese guy from Fresno; one wears a funny hat.

Nor is the movie as action-packed as it needs to be. These big summer superhero movies should be larger than life and breathtaking and fast. Captain America, despite all its efforts, is not. Instead it plays almost reserved, dwelling so much on the admittedly gorgeous production design that action becomes an afterthought. The most promising action sequences are condensed into a minor montage in the second act, and then summarily passed by. Like fellow Avenger Thor, Captain America is hamstrung by plodding pacing and a script gravely in need of some punching up. PG-13 for sci-fi violence and action. 124m. In 3D and 2D at the Broadway and Fortuna, 2D only at the Mill Creek and Minor.

COWBOYS AND ALIENS. A delicious B-movie premise is given an A-list cast and a blockbuster mega-budget ($100 mil). Jon Favreau (Iron Man) directs this yarn of an amnesiac stranger (Daniel Craig) who finds himself in the Wild West town of Absolution, where the grizzled Colonel Dolarhyde (Harrison Ford) rules with an iron fist. And then ... aliens invade. PG-13 for action and violence and partial nudity. 118m. At the Broadway, Mill Creek, Minor and Fortuna.

CRAZY, STUPID, LOVE. In this two-tiered romantic dramedy, Steve Carell stars as a man trying to rebound after splitting up with his wife (Julianne Moore). He's taken under the wing of an accomplished ladies man (Ryan Gosling) who suddenly finds himself actually caring for a woman (Emma Stone). PG-13 for coarse humor, sexual content and language. 118m. At the Broadway, Mill Creek and Fortuna.

THE SMURFS. Those tiny blue creatures that were originally created in 1958 by Belgian cartoonist Peyo and later turned into a 1980s Hanna-Barbera animated TV series have now come to this, a live-action/CG family, uh, film. PG for mild rude humor and polluting your childhood memories. 103m. At the Broadway, Mill Creek and Fortuna.

The Arcata Theatre Lounge's Sci-Fi Pint and Pizza Night is happening on Thursdays now. This week's fare has an airplane theme, with The Disappearance of Flight 412, a 1974 made-for-TV movie involving UFOs and right-wing conspiracies, and Robot Pilot (1941), described as "an American aviation sci-fi romantic screwball comedy."Thursday, 6 to 10 p.m. Friday at 8:30 p.m. the ATL has the 1991 women-empowerment classic Thelma & Louise. Rated R. Sunday at 6 p.m. is another 1991 film, Steven Spielberg's live-action grown-up Peter Pan tale Hook, starring Robin Williams and Dustin Hoffman. Rated PG. And Wednesday, Aug. 3, the ATL will host The Last Mountain, a documentary about the destructive environmental practices of Big Coal, presented by Humboldt Baykeeper. Doors open at 6:30 p.m., show starts at 7.

HARRY POTTER AND THE DEATHLY HALLOWS: PART 2. The boy-wizard becomes a man-wizard in the final installment. Rated PG-13. At the Broadway, Mill Creek, Minor and Fortuna.

MIDNIGHT IN PARIS. Woody Allen's latest sees Owen Wilson as a successful screenwriter who has unique experiences in the City of Lights. Rated PG-13. 94m. At the Broadway.

TRANSFORMERS: DARK SIDE OF THE MOON. Michael Bay is an evil machine. He directed this movie. Rated PG-13. 154m. At the Broadway, Mill Creek, Fortuna and Garberville.

ZOOKEEPER. Kevin James and a bunch of talking animals search for the lowest common denominator and miss low. Rated PG. 101m. At the Broadway.