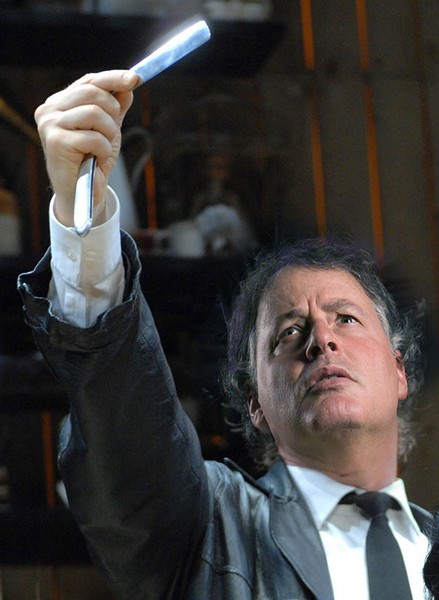 courtesy of HLOC Hannah Jones as Christine, who proves a more challenging mark than the two con men expect in the HLOC musical, Dirty Rotten Scoundrels

Opening Friday, Aug. 5, at the Ferndale Repertory Theatre is the Stephen Sondheim and Hugh Wheeler musical Sweeney Todd, the Demon Barber of Fleet Street. With its implications of cannibalism, this groundbreaking tale of a murderous barber and complicit purveyor of meat pies was controversial when it opened on Broadway in 1979. But it won eight Tony Awards, including Best Musical, and accolades for its stars, Len Cariou and Angela Lansbury. After numerous revivals, touring versions and other productions since, this musical thriller has become a Sondheim classic.

Among August premieres, the results of significant renovations to two North Coast theatrical venues will be on view. The John Van Duzer Theatre at Humboldt State will debut its major makeover, which includes a refurbished lobby, new lighting instruments and all new seats in the auditorium for the first time since the facility was dedicated (as the Sequoia Theatre) in 1960.

First to experience these renovations will be audiences for the Humboldt Light Opera Company summer show opening there on Aug. 5: Dirty Rotten Scoundrels. The jazzy musical comedy about two con men on the Riviera is based on the 1988 film comedy that starred Steve Martin and Michael Caine. Its music -- said to spoof Henry Mancini and other espionage movie composers -- is by David Yazbek, who also wrote the music and lyrics for The Full Monty, another Broadway musical based on a movie. Jeffrey Lane wrote the lyrics for this show, which ran on Broadway from January 2005 to September 2006.

Dirty Rotten Scoundrels romps on the Van Duzer Theatre stage Fridays and Saturdays at 7:30 p.m. and Sundays at 2 p.m. through Aug. 20, beginning with an opening night gala on Aug. 5. Because of the subject matter, this production is not recommended for children under 11. More information: 445-4310 or hloc.org.

Meanwhile, the "extreme makeover" of the Arcata Playhouse, courtesy of the Arcata Sunrise Rotary Club, will be partially complete when it pauses on Saturday, Aug. 6, for a fundraiser to help finish the job. It's a "Country Cabarette," an evening of music featuring Cadillac Ranch plus guests that include The Lonesome Roses Jacqueline Dandeneau, Rose Armin-Hoiland and Steve Irwin. It all starts at 7 p.m. and includes raffles and a chili contest.

Also in August, Humboldt Light Opera Company's KidCo runs a "Write Your Own Musical" workshop for children ages 7 to 18, Aug. 1-12, with the resulting musical performed on Saturday, Aug. 13.

KidCo will also hold auditions for its November production of Alice in Wonderland on Saturday, Aug. 20, at the Arcata United Methodist Church. Kids from K-12 should be there at 1 p.m. and expect to stay until 3 p.m. To prepare, there's an audition workshop on Aug. 6. Complete information on both workshops and auditions at hloc.org.

North Coast Repertory Theatre will hold open auditions for its November-December mystery, Agatha Christie's The Mousetrap, on Aug. 21 and 22 at 7 p.m. at NCRT. There are roles for three women and five men, ages 20s to 60s. For more information call 268-0175 or email the director at showtunewriter@yahoo.com.