Awash in Debt, Loleta Cheese Factory is Shuttered After 38 Years 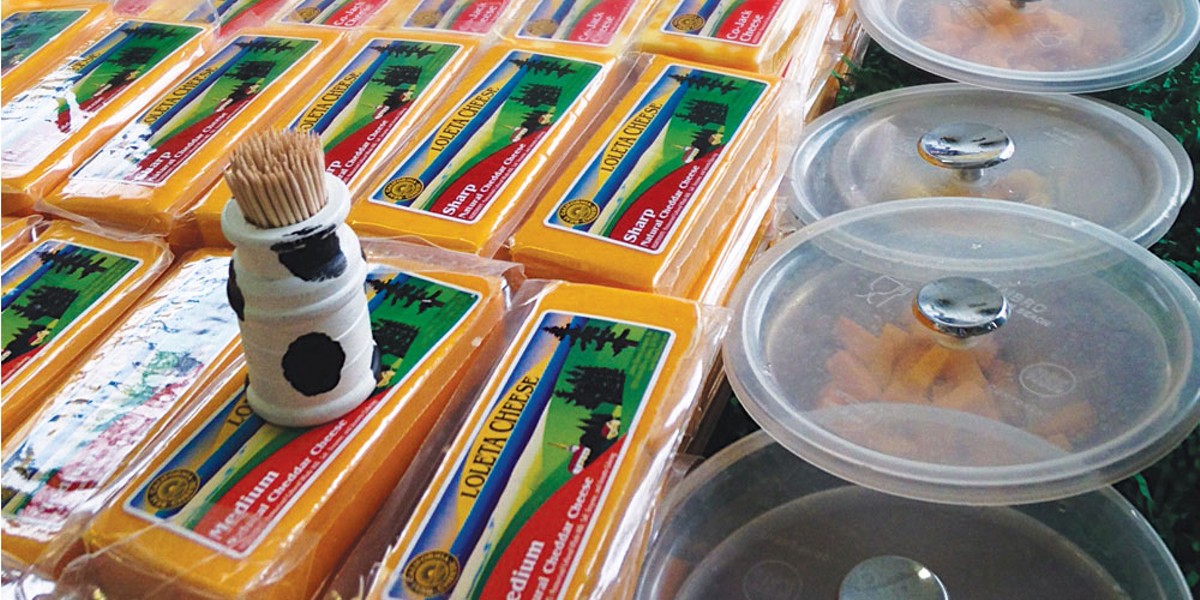 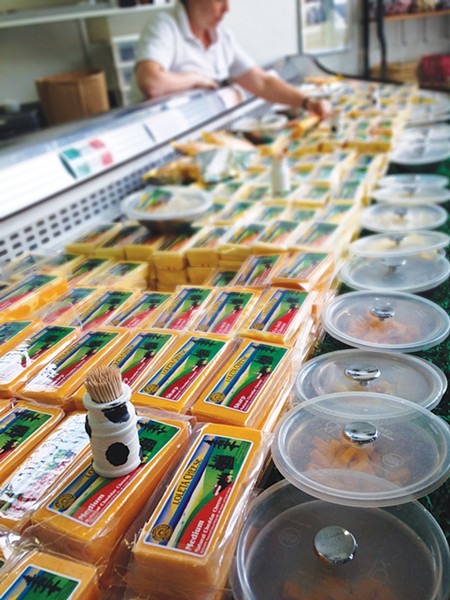 File Samples of cheese varieties at the Loleta Cheese Factory.

The Loleta Cheese Factory has closed amid a foreclosure on its property and a bankruptcy case that has stretched five years. The local attraction, which drew nearly 65,000 tourists annually to Loleta and once employed dozens of people, is now referring customers to grocery stores for what is left of its cheese inventory.

The foreclosure came as a "last resort" by Umpqua Bank, which holds the deed to the property, 11 months after owners Bob and Carol Laffranchi stopped paying the company's mortgage in January. According to Bob Laffranchi, the bank raised the company's interest rate from 7.5 to 12 percent last year, nearly doubling its mortgage from $4,400 to $7,800, which made it difficult for the company to meet the terms of its loan agreement.

Laffranchi told the Journal he doesn't know why the bank increased the company's rates but added that the only logical conclusion would be to assume that because of the recent downturn of Humboldt County's economy, Loleta Cheese Factory was seen as a "risky investment that needed to be removed."

Umpqua Bank spokesperson Kurt Heath said the specifics of the Laffranchis' mortgage are confidential and he couldn't comment on whether their rates had gone up. Umpqua Bank placed the Loleta property up for auction Dec. 6, but no bids were received, leaving the property in the hands of the bank from which it will be prepared for sale, according to Heath.

According to two legal notices in the Ferndale Enterprise, however, the cheese company's unpaid balance on the factory is $583,181 with an additional $32,000 due for the lumber yard next door.


"Once that process is complete, the property will be listed for public offers to purchase the real estate," he said in an email to the Journal.

Bob and Carol Laffranchi founded the company 37 years ago. Bob Laffranchi had been working as an agriculture teacher at Eureka High School when a student asked him how to make cheese and, using a recipe from a book, they both learned together. Soon after, the Laffranchis started the cheese company.

In 2014, the company filed for Chapter 11 bankruptcy protection in the face of millions of dollars of debt. According to documents filed with the bankruptcy court, the company owed more than $400,000 for farm equipment, another $536,000 to Nilsen Feed Co. and almost $1 million to Clover Stornetta Farms. A large portion of the debt stemmed from the company's failed attempt to start its own dairy farm to produce milk to make its cheese.

According to Laffranchi, the trouble came when the 2008 recession hit and the dairy economy plummeted, adding that the price of milk stayed the same while the cost of feed doubled.

"I was paying $200 per ton for high-quality feed and then the dairy economy went down and I was paying $550 per ton for junk feed, which didn't have all the nutrients and minerals you want in your product ... and that's what we're all about, high quality cheese for our customers," he said.

The cheese company stopped operating the dairy farm in 2014, the same year it filed for bankruptcy.

But the company's bankruptcy proceedings have been fraught with problems. While it initially filed for Chapter 11 protection, meaning it hoped to restructure its debt while retaining its assets, a court-appointed trustee switched the proceedings to Chapter 7 — which generally see courts liquidate a company's holdings to pay off whatever debt possible — in 2016. The switch came after Austin Wade, a certified public accountant brought in to analyze Loleta Cheese's books, found the company was being grossly mismanaged. While the company had presented the court with financial statements indicating it had a cash balance of more than $800,000 in March of 2016, Wade found that figure was "completely inaccurate, and not even close to the true cash balance, which was likely near zero at the time since checks were bouncing." Wade went on to report that the primary reason the statements were so far off is that the company wasn't including "payroll, rent and other expenses" in its accounting, and had not reconciled its books since late 2014 or early 2015.

Things went further south in early 2018 when the bankruptcy trustee accused the Laffranchis' daughter, Nicole Laffranchi, who'd been acting as the company's chief financial officer, of mishandling funds and filed a complaint against her looking to recover more than $200,000 in questionable transfers from the company's accounts.

"Clearly, there was no court order authorizing the transfers to Ms. Laffranchi," the trustee wrote, adding that Nicole Laffranchi represented that the transfers were to reimburse her for legitimate company expenses that had to go through her private accounts because vendors would no longer accept company checks. The trustee countered that Nicole Laffranchi's "explanation left many transactions unexplained."

Ultimately — because pursuing the complaint would prove time-consuming and costly, and because the state of Nicole Laffranchi's personal finances made him believe it would be difficult if not impossible to collect any lost funds — the trustee agreed to a settlement under which Nicole Laffranchi agreed to pay $22,500.

Bob Laffranchi told the Journal the cheese factory sold in 2016 to Bay Area chef Robert Stokes but the Laffranchis bought the company back a year later, when Stokes decided to move back to his hometown of Sacramento. If that's the case, there doesn't appear to be any documentation of it in the bankruptcy filings. Instead, there's a reference in a declaration by the company's attorney, Steve Olson, to a failed effort in November of 2015 for Loleta Cheese to merge with a company named Ben Fatto, which promised to bring $35,000 "of new value."

According to the California Secretary of State's Office, Ben Fatto Distribuzione incorporated in August of 2015 as a limited liability corporation, listing Stokes and Nicole Laffranchi as its executive officers. It canceled the incorporation in 2017.

Olson's declaration notes that the plans to merge with Ben Fatto "did not get off the ground" because it became evident the Loleta Cheese Co. had stopped paying insurance premiums and payroll taxes after filing for bankruptcy protection, which made "plan confirmation unfeasible."

The bankruptcy case remains open and appears to be in its final stages, as a new court-appointed trustee, Timothy W. Hothorn, submitted the Notice of Trustee's Final Report (a document that details Loleta Cheese Co. debts) on Dec. 5.

The document notes that Loleta Cheese Co. still owes thousands in back taxes, almost $1 million to Clover Stornetta Farms and the roughly $536,000 to Nilsen Feed Co., among other debts. (Numerous Journal attempts to reach Clover and Nilsen Feed were unsuccessful.)

In addition to blaming the shift in the local economy for prompting the bank to move to foreclose, the Laffranchis' other daughter, Michelle Laffranchi, told the Journal the PG&E power shutoff tipped the company "over the edge." She said it lost cultures, product and cash flow, which slowed down production even further. Despite the slow production and low cash flow that came after the blackout, the company didn't lay anyone off.

"We kept as much open (during and after the blackouts as possible)," Bob Laffranchi said. "The thing about these blackouts is that when a business closes, employees lose their income and it becomes a ripple effect, and that's not what I wanted for my employees."

Bob Laffranchi also said that because of technicalities with business foreclosure laws, he can't receive a new loan, but that he tried to negotiate with the bank in an effort to stop the auction. The family had written letters to local politicians, including Humboldt County First District Supervisor Rex Bohn, state Sen. Mike Mcguire and North Coast Congressman Jared Huffman, asking for their help.

Huffman sent a letter to Umpqua Bank asking the institution to consider negotiating with the cheese company, noting it brings many jobs to "rural and economically challenged" Loleta and is a large part of the local dairy industry.

Umpqua Bank then released a statement addressing Huffman and other local officials' pleas to work with the company, stating that the bank only resorts to foreclosure after all other reasonable options have been exhausted.

"In this case, our efforts have spanned several years and many attempts to find a solution," the statement reads.

Reached Dec. 9, Bob Laffranchi said all cheese production came to a halt a few weeks ago and that he started to lay off employees soon after, though the store and grilled cheese bar remained open until the day of the auction.

"We've had almost 38 years of business because of our incredible customers and community," he said. "Yes, we've got a problem but we're trying to fix it. I'm in the business of keeping employees employed and our customers taken care of."

The Laffranchis have not heard from the bank since the auction but are remaining hopeful they will receive some good news.

Editor's note: This story was updated to include additional information.

Iridian Casarez is a staff writer at the Journal and prefers she/her pronouns. Reach her at 442-1400, extension 317, or iridian@northcoastjournal.com. Follow her on Twitter @IridianCasarez