An Evening with Beverly Luff Linn

An Evening with Beverly Luff Linn 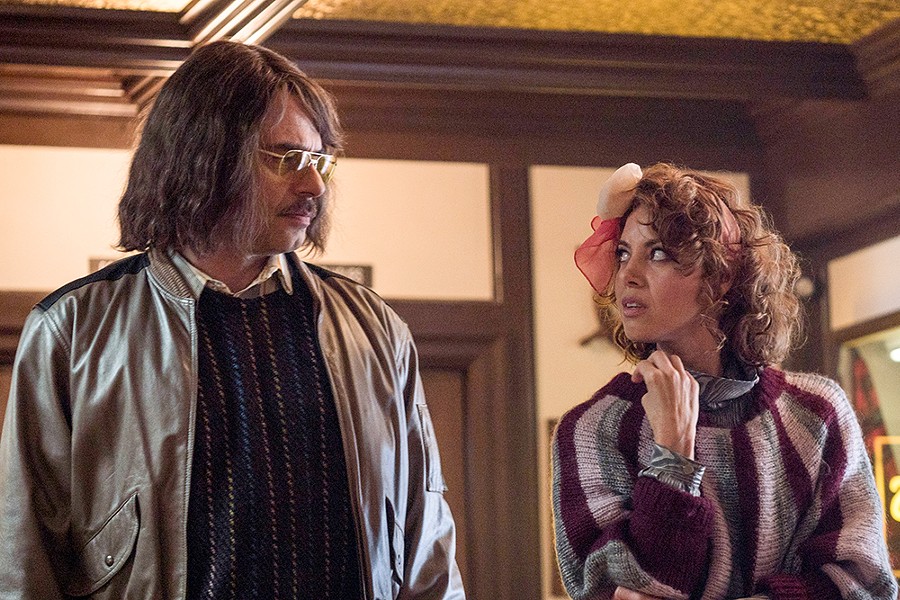 An Evening with Beverly Luff Linn When people want to debate birthright citizenship.

AN EVENING WITH BEVERLY LUFF LINN. Some screenwriters write a script for a specific actor. Wes Anderson famously wrote Royal Tenenbaum for Gene Hackman and had to cajole the actor to take the part. An Evening with Beverly Luff Linn, which recently had a two-screening weekend at the Minor Theatre and is available on demand now, feels as though it was written for a specific location: Humboldt County, California.

In homage, with plenty of jabs, the local landscape is more than just a backdrop for this cinematic hodgepodge of familiar late 20th century weirdness. The universe director Jim Hoskins creates could only exist in Eureka and its surrounding areas. To my mind, An Evening with Beverly Luff Linn is a perfect celluloid adaptation of our community, rivaled only by Endor via Redwood National and State parks.

It's an odd movie and won't be for everyone. It's a heist film, a mystery, a story of love lost and found again, all swirling around Lulu Danger (Aubrey Plaza, playing refreshingly against type). Its exaggerated strangeness and non sequiturs will no doubt turn off a certain set (I'm subtweeting this publication's actual film columnist) but its purposeful and persistent aesthetic delighted me.

Lulu works in a crummy coffee shop with a couple of friendly weirdos and her husband, Shane Danger (Emile Hirsch), an overbearing, unrepentant dick. When corporate tells Shane to save money by firing an employee, he axes Lulu. Shane, driven by jealousy of Lulu's brother's cash savings, leads a bungled robbery of the brother's mini mart. When a mysterious drifter overhears Lulu's brother Abjay plotting revenge, he offers to retrieve the cash box. The gunman, Colin Keith Threadener (Jemaine Clement), confronts Shane in his home and Lulu sees an opportunity, taking Colin's gun and the cash box, and ordering Colin to drive her away. This begins their odyssey. When Lulu sees an advertisement for a magical evening with Beverly Luff Linn (Craig Robinson), whom she clearly recognizes, she and Colin take residency at the Hotel where he'll perform. The intrigue continues as Lulu tries to contact Beverly Luff Linn but is thwarted by his assistant, fends off Colin's growing feelings for her, hides from her husband and deals with her post-marriage crisis.

Much of the movie takes place in the confines of the Eureka Inn, which is absolutely fitting for its oddball mashup of Tudor framing, wood paneled rooms, carpeted lobby and eerie bar. Hoskins clearly revels in discomfort, and it's strangely delightful. The talented cast is supported by character actors, people clearly selected for their decidedly non-movie star affectations and appearances. The charismatic Robinson as the titular character delivers nearly all his lines as expressive grunts, recalling Peter Boyle's monster in Young Frankenstein, and the denouement of his character's story is surprisingly touching.

Plaza tones down her trademark snark and pitch-black nihilism, turning Lulu into a sympathetic refugee from a crappy life born of a lack of options in her "shithole town in the middle of nowhere." That observation, along with Colin's frustration at their "shitbox, dickhole hotel," seem like knowing digs at our community, even if they're all in good fun.

And this movie is fun. It is frequently laugh out loud hilarious. Clement, Plaza, Robinson and Matt Berry, as Luff Lin's assistant Rodney Von Donkensteiger, are masters of comic timing and expression. Hirsch clearly enjoys playing an egotistical, ambitious and deeply stupid villain. The supporting cast is delightfully weird and earnest. Local funny guy Luis "Nando" Molina gets a wordless cameo that's one of the best scenes in the movie.

An Evening with Beverly Luff Linn is also a masterclass on visual design. You're not meant to love the haphazard aesthetic, which mixes motifs from the '70s, '80s and '90s like an outfit of naugahyde, plaid, stripes and tie-dye. But the outrageousness of the costumes, the hair and makeup, and the set design binds together to create a cohesive alternate universe. Every detail, down to the names of sodas, is a clever observation.

The crew Hoskins assembled for this is impressive. Production designer Jason Kisvarday also created the worlds of Swiss Army Man (another entertaining piece of quirk-cinema filmed locally), Boots Riley's Sorry to Bother You and Childish Gambino's This is America. Costume designer Christina Blackaller worked on Beatriz Comes to Dinner and The Lovely Bones. Nearly every crew member appeared to have worked on Hoskin's previous feature, The Greasy Strangler, which I shamefully have yet to see. Bumping it up my queue now.

At the Oct. 11 cast and crew screening at the Minor Theatre, a small crowd formed in front of a red carpet set up by the Humboldt County Film Commission. At the front of the line, an older man with long gray beard sported a bold blazer covered in neon green pot leaves. A worn limousine circled the block before offloading its lone passenger, a woman whom several of the attendees recognized. None of the movie's prominent stars were in sight but whoops sounded through the theater when locals appeared on the screen.

As the surreality of the screening dispersed onto the streets of Arcata, it occurred to me we are all extras in a cosmos not so different from Beverly Luff Linn's. AMAZON, ITUNES, GOOGLE PLAY, VUDU.

BEAUTIFUL BOY. Timothée Chalamet and Steve Carell crush your soul in this drama about a father and his son who's struggling with addiction. R. 120M. BROADWAY.

MUSEO. Gael García Bernal and Leonardo Ortizgris star as thieves in over their heads after taking artifacts from a Mexico City's National Museum of Anthropology. MINIPLEX.

NOBODY'S FOOL. Tiffany Haddish plays a newly free ex-con who finds out her high-powered sister's (Tika Sumpter) online boyfriend may not be who he says. With Whoopi Goldberg. R. 110M. BROADWAY.

FREE SOLO. Gnaw your nails down to nothing as free climber Alex Honnold scales the El Capitan wall with no ropes in this documentary. PG13. 100M. MINOR.

THE HOUSE WITH A CLOCK IN ITS WALLS. An orphaned boy (Owen Vaccaro) helps his warlock uncle (Jack Black) track down an apocalyptic timepiece. With Cate Blanchett. PG. 104M. BROADWAY.

THE OLD MAN & THE GUN. Robert Redford stars as a long-in-the-tooth bank robber. With Sissy Spacek, Danny Glover and Tom Waits. Also Casey Affleck because it's such a scary time to be a man. PG13. 93M. BROADWAY, MILL CREEK, MINOR.

SMALLFOOT. Channing Tatum and James Corden voice an animated feature about a yeti out to prove the existence of a human. PG. 96M. BROADWAY.